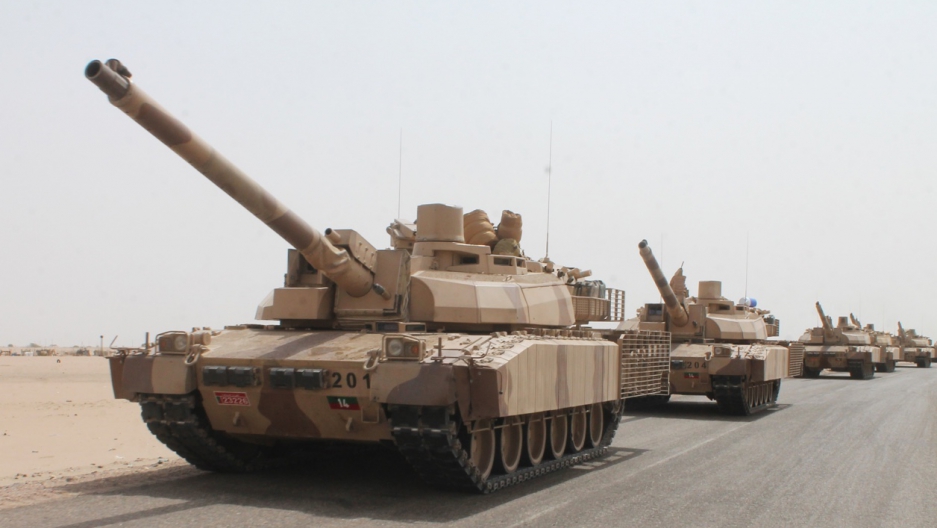 Tanks belonging to a Saudi-led coalition are deployed on the outskirts of the southern Yemeni port city of Aden on Aug. 3, 2015.
Share

You probably didn't hear about this. But over the last few weeks, a coalition led by Saudi Arabia launched a ground war in Yemen. It started slowly. Small numbers of troops from Saudi Arabia and the United Arab Emirates entered the country to help the Yemeni army beat back a takeover by Houthi rebels. Then, this week, the coalition took it up a serious notch.

Emirati soldiers landed in the southern port city of Aden on Monday. And they brought with them tanks and other armored vehicles. That helped Yemeni forces retake an important airbase. Now the coalition is pushing further into the country.

The ground invasion marks a major escalation in the Saudi intervention in Yemen. It started in March with airstrikes, which have devastated the already impoverished country. Hundreds of civilians have been killed, more than a hundred thousand displaced, and access to food, water and electricity has all been disrupted for millions. From the perspective of many Yemenis, Saudi Arabia is the worst aggressor of them all.

But while the Houthis acknowledge they have an alliance with Iran, they deny that they are acting as its proxy. The Houthis have a long, independent history of resistance in Yemen. They probably already had plenty of weapons. The US government says that Saudi Arabia is probably exaggerating the ties between the Houthis and Iran.

Such criticism, however, has not slowed Saudi Arabia down — at all. And now there's a ground war.

Half the world's illegal timber comes from Indonesia. And almost all of it ends up in China. Cambodia has the world's third-highest deforestation rate. And 85 percent of the felled trees are exported to China. An equally high percentage of Mozambique's timber goes to China. Same with Papua New Guinea. In 2012, China became Brazil's leading market for wood. Then there's Myanmar, where Chinese companies have plundered trees, mostly illegally, for more than a decade.

China is largely responsible for much of the world's current rates of deforestation, and there is not a whole lot anyone can do about it. China itself, in a move some might describe as hypocritical, has passed laws to ban commercial logging within its own borders. But it refuses to regulate imports. As a result, one expert told GlobalPost, China is “effectively exporting deforestation around the world.”

The main reason for China's ferocious consumption of timber? Economic growth. As the Chinese grow wealthier, so does the construction industry. There has been a 300 percent rise in Chinese demand for wood since 2000. And many of the companies acquiring this wood from around the world appear willfully unconcerned about whether or not it was obtained illegally.

“Chinese really don’t care where their wood comes from, as long as it’s cheap. If you’re talking about illegal logs from Indonesia or cutting down the last tree in the Solomon Islands, they apparently have no issues with that,” Bob Flynn, international forests director at the timber consultancy RISI, writes in his book about China's environmental impact.

GlobalPost Senior Correspondent Will Carless writes of a trend in a recent slew of viral videos coming out of Brazil: Brazilians are fed up with the lack of respect for, and enforcement of, traffic laws. But this isn't manifesting itself in violent road rage (at least not in these examples). Instead, some Brazilians are simply taking matters into their own hands, often literally.

One man, by himself, lifts a small car off of a bike path in one video. A gathering crowd nearby cheered before he sped away on his bicycle. In another, a group of apparent jiujitsu athletes run out into the street to move a running car off a crosswalk it had blocked. Then there are these amazing individuals, who shamed one driver for parking in a handicapped space by meticulously covering his car in sticky notes.

All of this may be a sign of something much more significant. “Over the past two decades, Brazil’s growing middle class has begun to demand responsible government, and citizens,” Carless writes. A shift like that could change a lot more than just driving habits.