A sign in the hallway at Digital Harbor High School in Baltimore.

Digital Harbor High is in a shiny new building, just south of downtown Baltimore. It’s summer, though, and the halls are quiet except for a small conference room on the first floor, where a handful of students and teachers gather around a table. They're here, in part, because a year ago, things at Digital Harbor were anything quiet.

At the end of last school year, a small classroom incident mushroomed into several days of violence between students — African Americans pitted against Latinos. The violence rippled to other schools.

“Me and my friends were always on the lookout,” says Domonique Hart, an African-American student who was finishing up his junior year at Digital. “In the building we were safe, but the second we stepped foot out the building, got down the streets or around the basketball court … just didn’t know where anything was going to happen.”

Police presence around Digital Harbor beefed up, and tensions eased when school let out for the summer. In the fall, the school, along with a local Latino group called CASA de Maryland, started a program called SPIRIT — that’s who’s meeting in the quiet school building.

Even though the purpose of SPIRIT is to deal with the racial tensions at the school, race isn’t at the center of every meeting. Instead, the idea is to get students from all backgrounds talking about what needs fixing at the school.

“What hopefully this process does is it develops young people’s leadership by offering them a space where they can express their problems and their solutions and build relationships across race, ethnicity, culture, economic status … anything. In order to see that many of the problems that they have affect people all over, and that it’s more effective to solve those when people band together,” says Andrew Reinel, an organizer with CASA.

Before the students dive in, there's an icebreaker. They roll a miniature soccer ball around as music plays on a student’s phone. When the music stops, whoever has the ball has to answer a question about themselves.

“What is something you look forward to [in] this meeting with Dr. Thornton?” reads Achol Odolla, a 12th grader originally from Ethiopia. This meeting she mentions is a big deal: The students have been invited to talk to Gregory Thornton, the Baltimore superintendent of schools. The meeting is coming up, and the students are working on what they’ll tell Thornton about problems at school they’ve identified, and their proposed fixes. They want anti-racism training for school staff, better mental health counseling, and more college support for undocumented kids.

They’re stiff at first — a little nervous. Kathleen Callaghan, an English-language teacher at Digital, makes a suggestion. “They love it when you can make something very personal. Why you feel about something the way that you feel about it; how it comes home for you. That really helps them understand where you’re coming from.” 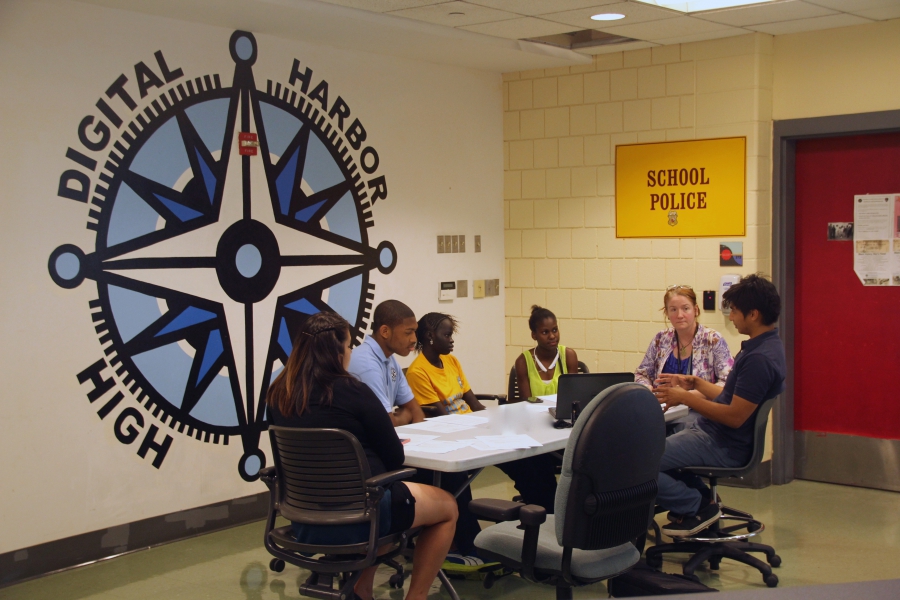 A handful of SPIRIT participants meet earlier this summer to begin preparing for a presentation to the Baltimore City superintendent of schools.

The students take the advice “I want to go to college, but … we don’t have orientation or some people talking about how we can go to college or other education,” begins Pedro Ortega, a top-performing student who wants to go to college. But he’s unsure how to pay for school, or even what schools would accept him because he’s undocumented.

“I have a year and six months in this beautiful and amazing country,” continues Ortega, whose family is from Ecuador. “I want to grow up in our community, and I can help other young people in my community. Yeah, that’s my experience, that’s my short story I want to share with you.”

The group gives Ortega finger-snapping applause, and then Achol Odolla chimes in.

“I feel so bad because some people come here and they say like, ‘America is the land of opportunity.' But when you come here, if you don’t have the papers, it’s so hard to go to school and everything. And the students here, they just play with education while other people are trying so hard and they can’t even get it.”

The meeting with the school chief went well. He was particularly interested in what the students had to say about in-school health services. They’re hoping to expand SPIRIT to more schools soon.