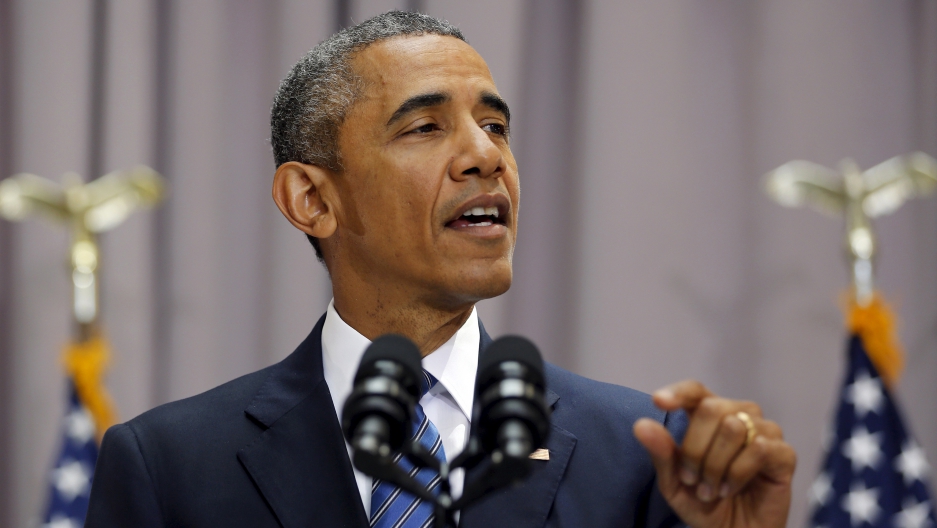 President Obama made an impassioned appeal to Congress on Wednesday to endorse the nuclear deal with Iran. Congress needs to approve the lifting of sanctions against Iran. Obama argued that if Congress rejects the deal with Iran, there's no viable diplomatic alternative to confrontation.

“Let's not mince words,” the president said. “The choice we face is ultimately between diplomacy or some form of war. Maybe not tomorrow, maybe not three months from now, but soon.”

The president was speaking at American University, in Washington DC. That venue was no accident. It’s where President John F. Kennedy in 1963 famously made his case for engaging in nuclear diplomacy with the Soviet Union.

“The United States, as the world knows, will never start a war. We do not want a war. We do not now expect a war. This generation of Americans has already had enough — more than enough — of war and hate and oppression. We shall be prepared if others wish it. We shall be alert to try to stop it. But we shall also do our part to build a world of peace where the weak are safe and the strong are just. We are not helpless before that task or hopeless of its success. Confident and unafraid, we labor on — not toward a strategy of annihilation but toward a strategy of peace.”

Matthew Bunn knows something about nuclear diplomacy. He's a professor with the Project on Managing the Atom, at the Belfer Center of Harvard's Kennedy School of Government. His interest runs in the family: his father, George Bunn, was a central figure in negotiating the original nuclear Non-Proliferation Treaty.

Bunn says Kennedy’s 1963 speech — at the height of the Cold War — had a dramatic impact. “He offered with soaring rhetoric, a really new approach to thinking about relations with the Soviet Union...It led to a lessening of tensions that led ultimately to negotiations on nuclear arms.”

Obama’s speech was different. “It’s a very different world,” says Bunn, “and a very different set of politics today. And we saw a very different presidential approach in this speech. I think Obama did a very effective job as a debater, knocking down arguments against a policy that he was putting forward, with the deal with Iran.”

“It was not the kind of approach that Kennedy was taking, with soaring rhetoric laying out a really new way of thinking. It was a very lawyerly and effective set of debating points.”

“The president,” he adds, “was making the case that if this deal goes down, the chance for war in the Middle East goes up.”

Bunn refuses to make a prediction but says it’s likely that Congress will vote against the deal. But he points out that Obama can veto that decision, and it’s unlikely there’s enough votes in Congress to override his veto. “So that the deal will limp forward, despite Congressional opposition.”