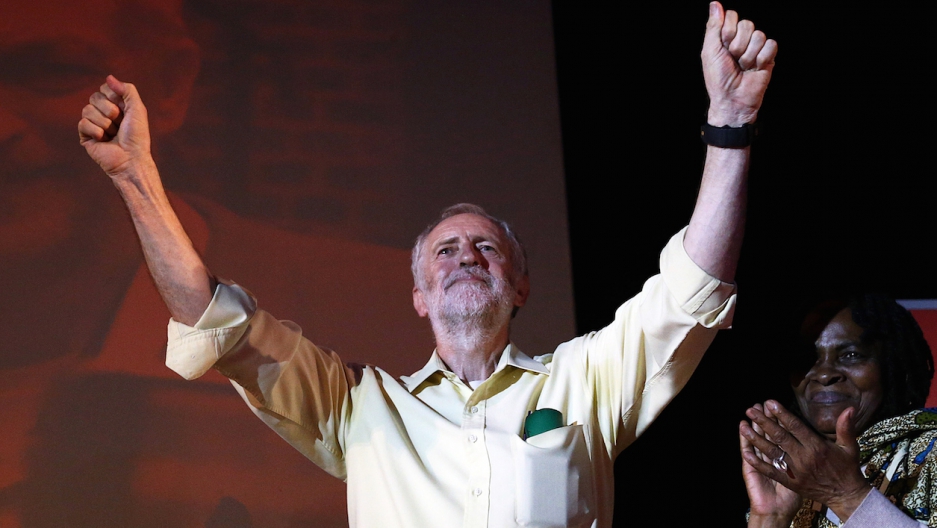 And the crowd goes wild for Jeremy Corbyn at a Labour Party rally Monday in London.
Credit: Carl Court
Share

LONDON, UK — The next leader of Britain’s opposition could be a vegetarian who would end austerity, make universities free, trash all nuclear weapons and sit down for talks with terror groups.

His biggest opponent? His own party.

What was a pretty dull race for the Labour Party leadership got interesting last month, when longtime member of Parliament (MP) and self-described socialist Jeremy Corbyn emerged as the top candidate.

Corbyn, 66, is like the Bernie Sanders of UK politics — a lefty outlier who’s captured popular discontent. But unlike Sanders, Corbyn has already become a surprising front-runner in his race.

He’s an active anti-nuclear campaigner. He was against South Africa’s apartheid regime before it was cool to be, getting arrested in 1984 for protesting outside the country’s London embassy.

He invited Sinn Fein President Gerry Adams to London in 1984, in the midst of the Irish Republican Army’s bombing campaign in Britain, and has spoken of the need to reach out to groups like Hamas.

Whoever becomes the next Labour Party leader could, theoretically, become the next prime minister. Typically, the leader of the party that wins a plurality of votes in a UK general election is named head of government.

He has a clear, simple anti-austerity and pro-welfare platform that contrasts with the wishy-washy, austerity-lite contortions of the trio against him.

Corbyn threw his hat in the leadership race earlier this summer, after former leader Ed Miliband resigned following Labour’s dismal showing in the May election.

At first, Corbyn seemed like a fringe candidate. In his 32 years as MP for London’s Islington North, the tiniest constituency in Britain, he’s never held a cabinet position or any other post elevating him above the rank-and-file of Britain’s 650 members of Parliament.

Yet as an uninspiring field of mainstream candidates languished, Corbyn took off. His pro-welfare policies and rumpled, accessible image has won over young people, old lefties and others disenchanted with austerity-era politics.

“It’s the first time there’s been a mainstream politician who has voiced opinions that I feel I can get behind,” said Rosalind Ereira, 38, a London television producer who joined the Labour Party this month specifically to cast a vote for Corbyn.

“I like that he’s anti-austerity and is backing that up. I like that he wants to re-nationalize the railways and other things that should never have been privatized in the first place. He’s old-school left wing, and so am I.”

More from GlobalPost: David Cameron says Iraq War has almost nothing to do with why people join the Islamic State

He won the backing of Britain's two largest trade unions. A July 22 poll of Labour supporters (the only people who can vote in the Sept. 12 leadership election) found 43 percent backed Corbyn, more than any other candidate.

He’s also ahead with all the bookmakers.

His growing army of supporters is giddy about a potential victory. But mainstream Labour officials are panicking — and Conservatives are gloating — about the possibility of a leader so far at one end of the spectrum that he’d alienate moderates.

Some Labour MPs have said the vote should be canceled altogether. Others have whispered to the press that an internal party coup could depose Corbyn should he pull it off and win.

The parliamentarian who nominated Corbyn for party leadership said she was a “moron” for doing so.

The parliamentarian who nominated Corbyn for party leadership said she was a “moron” for doing so.

Even former Prime Minister Tony Blair spoke up publicly against Corbyn, warning fellow Labour voters that veering to the left could consign the party to loser status for decades.

“You win when you support business as well as unions. You don't win from a traditional leftist platform,” Blair told an audience at the London think tank Progress. “When people say, ‘My heart says I should be with that politics’ — well, get a transplant, because that’s just daft.”

The party's left flank accuses Blair of dragging Labour away from its working-class, social welfare roots toward a more capitalistic center.

On many issues, Corbyn lies to the left of his left-of-center party. He is against austerity cuts to government spending and in favor of higher taxes on the rich and corporations.

He refused to vote with the Labour government more times than any other Labour MP during the party’s last term in office, dissenting on issues like immigration, nuclear disarmament and treatment of Northern Ireland’s terror suspects.

More from GlobalPost: Even terrorists get older. Then what happens? (VIDEO)

“He has a clear, simple anti-austerity and pro-welfare platform that contrasts with the wishy-washy, austerity-lite contortions of the trio against him who all, in their different ways, are dull as ditchwater,” said David Gow, a former Guardian journalist and Labour activist.

At the same time, Gow said, Corbyn “has zilch experience of office. He has been a backbencher for 33 years, luxuriating in the comfort zone of opposition and protest.”

There are six weeks to go before the vote. A lot can happen in that time. Gow and others anticipate that one or two candidates will drop out (or be pressured to drop out) of the race by business-friendly, Blair-leaning factions in the party, so they can concentrate their support on another candidate.

“These figures are disastrous for the Labour Party, disastrous,” political strategist and former Blair adviser John McTernan told the BBC. “The fact is the other candidates need to decide who is the ABC candidate — the Anyone But Corbyn candidate.”