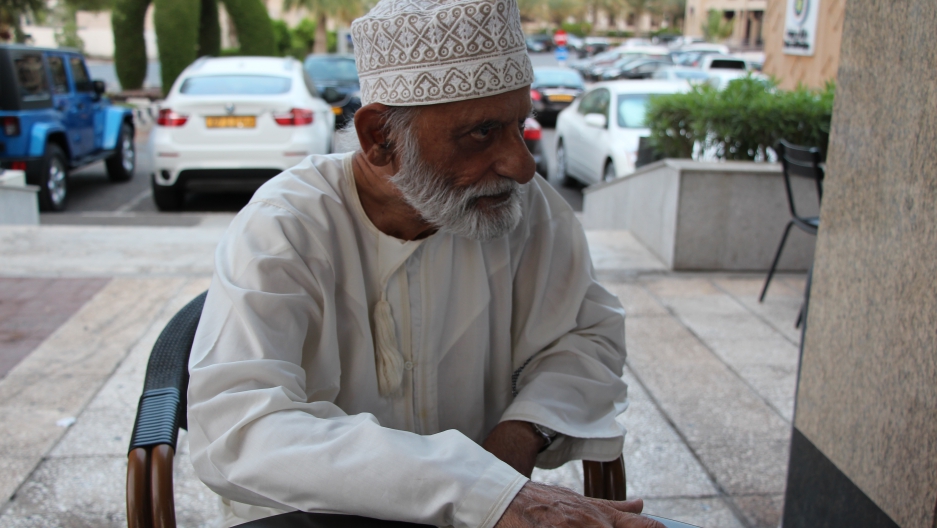 Sadeq Sulaiman, a former ambassador to the US, in Muscat, Oman. He said that Oman opposes confrontation with Iran: "Military solutions leave behind very bad residues."
Credit: Reese Erlich
Share

MUSCAT, Oman — Vendors call out as they sell sweet snacks, clothing and jewelry in the Muttrah Souk, one of the oldest bazaars in the Mideast. Here, the age-old art of bargaining is honed to a fine point. The merchants are friendly and can make small talk in five languages. They'll discuss business, the state of tourism and even the war in Yemen. There's one topic that rarely comes up: religion.

Unlike in some other countries in the region, in Oman the different branches of Islam live peacefully with one another. In many ways Oman is a throwback to an earlier time when adherence to one sect or another was a personal matter. Residents here often don't know the religious affiliation of their neighbors.

That was the norm in many countries until the rise of extremist political Islam, according to Muscat-based researcher Khalid al Wahibi. Referring to a friend sitting next to him, Wahibi said, "I don't know his background. I don't want to know. And I don't care. I'm Omani and Muslim. That's enough."

While the government doesn't publish statistics on religious affiliation, best estimates indicate about 50 percent of the country's 2.25 million Omanis are of the Ibadi faith.

The Ibadi branch of Islam, also known as the “third branch,” was established over 1,300 years ago, predating Islam’s split between Sunni and Shia after the Prophet Muhammad’s death. Sunnis constitute another 45 percent of the population, while most of the rest are Shia.

Omanis have a long history of religious tolerance. The Shia minority doesn't face discrimination by the majority Ibadis or larger minority Sunnis. But that equanimity comes at a price. Suspected religious extremists, indeed all dissidents, face sharp repression under the authoritarian rule of Sultan Qaboos bin Said al Said.

By simply posting on social media, dissidents can land in jail and sometimes face torture.

"Contrary to many people’s impression of Oman as being a beautiful and peaceful desert kingdom, the truth is very different," said Melanie Gingell, a member of the advisory board of The Gulf Centre for Human Rights based in London.

In international relations, Oman is considered part of the pro-US, Sunni camp, along with Saudi Arabia and the United Arab Emirates. However, the country follows an independent foreign policy.

It does not participate in the Saudi bombing campaign and naval blockade against Yemen. Qaboos has hosted several negotiation sessions aimed at stopping that war. He has kept friendly relations with both the US and Iran, the world’s most powerful Shia-majority country. Oman facilitated secret US-Iran meetings that eventually resulted in the Vienna nuclear talks.

Oman is living proof that the conflicts in the region have more to do with economics and geopolitics than religion.

Sadeq Sulaiman, a former ambassador to the US, told GroundTruth that Oman takes the long-term view and opposes confrontation with Iran. Relations need "to be on the political and diplomatic side," he said. "Military solutions leave behind very bad residues."

The Muslim call to prayer echoes from the 300-foot-tall minaret at Muscat's Grand Mosque. At full capacity the mosque holds 20,000 people and features the second largest handwoven carpet in the world. A huge, mechanical cherry picker is required to change the light bulbs in the chandeliers perched over the main prayer hall. Inaugurated in 2001, the Grand Mosque stands as a monument to religious tolerance. Muslims of all sects are welcome to worship here.

At the information center of the Grand Mosque, a soft-spoken religious scholar, Hafidh al Rawahy, provided some background to the emergence of Islam in Oman.

The Ibadi branch of Islam began 20 years after the death of the Prophet Mohammad in 632.

As a minority sect, Ibadis allowed their members to intermarry with other Muslims, and the children of those marriages enjoyed full inheritance rights.

In the late 600s, a dispute over who would succeed Mohammad as temporal leader led to the schism between Sunni and Shia.

"It was based on political, not theological differences," explained al Rawahy. The differences in Islamic teachings came later.

"You have room for diversity of interpretation,” he said. “This diversity is a positive thing."

The Ibadi faith took root in Oman, and it became a regional power in the 1600s, competing with Spain and Portugal. The Omani sultanate exercised influence as far away as Iran and Pakistan to the east and to the African island of Zanzibar in the south. Oman became a major force in the African slave trade.

While the majority of Omanis remained Ibadi and Sunni, Shia Muslims made their way to the coastal sultanate from Persia and what is modern day India and Pakistan. The Shia integrated into Omani society over hundreds of years.

"Islam in Oman has always been practiced with tolerance," said Rawahy. "There's not much focus on a particular sect. They look upon one another as brothers."

Starting in 1891, Britain effectively ruled the country, ruling through successive sultans. Oman was not a major producer of oil and natural gas. But Britain and later the US sought dominance because of Oman's strategic location along the Strait of Hormuz, the narrow passageway through which much of the world's oil passes.

Nationalists and Marxists sought to overthrow the British and the monarchy in the Dhofar Rebellion, which began in 1964. By 1970 the rebels were winning. The regime was so weak that the British decided to overthrow the reigning monarch, Sultan Said bin Taymur. Omani soldiers under British command broke into the royal palace, and after being fired upon, shot the sultan in the leg. He was kidnapped and flown to London on a Royal Air Force plane. Said died in exile two years later.

His son, Sultan Qaboos, had been under house arrest by his father. He was so weak he had to be flown to Muscat and carried off the plane.

The current Omani authorities refer to this incident as a takeover by Sultan Qaboos, but it was engineered by the British, some of whom stayed as royal advisors well into the 1990s. For a time the commanders of the army, navy and air force were British, as well as most of the officer corps.

The newly installed sultan eventually defeated the Dhofar rebels with the backing of the UK, the US and 3,000 troops provided by the shah of Iran, an action that laid the basis for friendly relations to this day.

Sultan Qaboos used carrot-and-stick policies to stay in power for 45 years. He remains the longest-reigning leader in the Middle East.

Over the past 20 years the government has arrested and jailed Sunnis, Ibadis and Shia suspected of harboring anti-government views.

Tawfeeq Al Lawati, a member of Oman's Consultative Assembly, told GroundTruth that contact with foreign groups has been strictly forbidden.

"To be part of these movements internationally or regionally," he said, "that was not tolerated at all."He defends the government policy of monitoring Facebook, Twitter and other social media to weed out dissenting views. "It's not only tweets," he said. "Any action that could lead to civil disturbances or clashes between different sects is not tolerated. And it is punishable by law."

Human rights groups sharply criticize Oman when it jails dissidents for what in other countries would be considered non-violent advocacy.

The Bertelsmann Stiftung’s Transformation Index (BTI) evaluates democratic institutions in countries around the world. In a report on Oman it concluded that "Repression remains the preferred strategy for silencing dissent: hundreds of protesters, including students, journalists, lawyers, intellectuals and human rights activists, have been arrested and sentenced to jail terms. The decision-making process remains firmly closed to dispute and the sultan enjoys absolute power in governance."

Omani officials acknowledge government crackdowns on individuals they consider religious extremists but say the authorities go to great lengths to persuade people to change their views prior to arrest.

Ehsan Sadiq al Lawati, an assistant professor at Sultan Qaboos University and a leader in the Shia community,cites the example of some young men posting extremist views on social media in April. First, the government set up a meeting between the dissidents and their tribal chief, which al Lawati attended. They were influenced by what they had read in the media, says al Lawati, and had no connections with foreign groups.

When they refused to recant their views, they were arrested and held without trial for less than a month. "They were advised not to follow these kinds of beliefs," said al Lawati, and then released.

One can't compare Oman with other countries' handling of extremists, according to al Lawati. "In other countries they disappear. Here the situation is very different."

However, a team of investigators from The Gulf Centre for Human Rights reached a far different conclusion. They found widespread use of torture in Oman.

Their report stated that torture included "mock execution, beating, hooding, solitary confinement, subjection to extremes of temperature and to constant noise, abuse and humiliation. The practice is allowed to flourish against a back drop of widespread arbitrary arrest and detention in secret institutions. The state has failed to conduct prompt and impartial investigations into these allegations as required under its constitutional and international law obligations."

While the Omani government takes a hard line against internal dissent, it developed a much softer approach to foreign policy. Oman has reconciled politically with Tehran, not based on religion, but on political necessity.

Saud Al Zadjali, a consultant to Ministry of Education, told GroundTruth that Oman has close political and economic ties with Iran but rejects its ideology. "Both invest in the other," he said.

Sulaiman, former ambassador to the US, said that unlike the US and Saudi Arabia, Oman recognizes Iran's legitimate influence in the region. "There's nothing odd about that," said Sulaiman. "All major countries do it one way or another."

He said the difficulty is making the relationship cooperative.

"Iran doesn't want to be a pariah," he said. But Oman and the Gulf countries are not preoccupied with the possibility of Iranian atomic bombs. They are much more worried that lifting economic sanctions will allow Iran to expand its influence in Lebanon, Syria, Iraq and Yemen.

If the estimated $10-30 billion now withheld due to sanctions is released, Sulaiman asked, "How will that be used by Iran?" He hopes Iran uses the money for legitimate internal needs.

"If it gets channeled into helping some extremist groups, that's the worry of the Gulf countries," he said.Whatever the ultimate results of an agreement with Iran, Oman is likely to maintain its friendly relations with Iran — a country from the Sunni camp working with a Shia power.

Professor al Lawati said Oman is just one example of how religion is not the driving force in Middle East conflict.

"It's about the most powerful countries who want create enemies between the groups,” he said. “They want to divide [Shia and Sunni] to keep power."

GroundTruth special correspondent Reese Erlich is author of "Inside Syria: The Backstory of Their Civil War and What the World Can Expect," now available in English and Arabic.