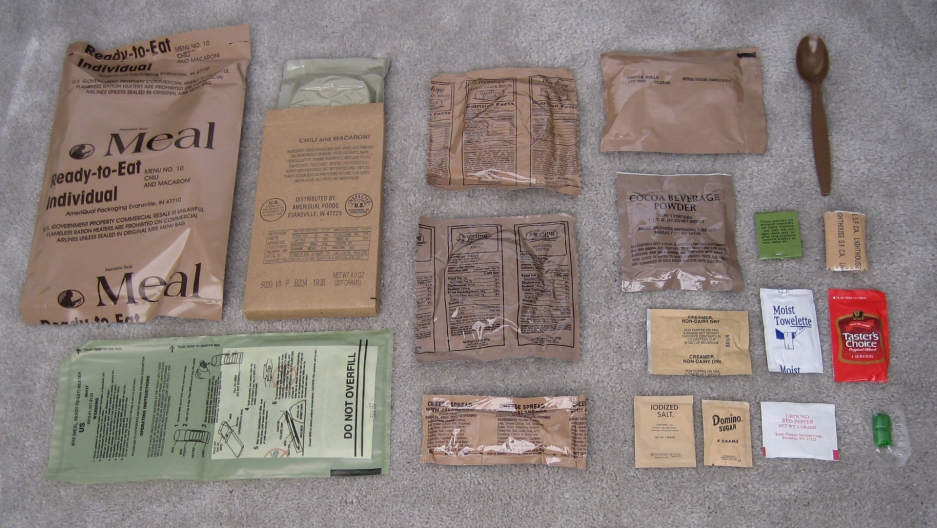 The contents of an MRE (Meals Ready to Eat)

Yes, we're a food-obsessed nation. But we still have a long way to go to understand exactly what it is we're eating.

Food writer Anastacia Marx de Salcedo is here to help with a fun and startling new book "Combat-Ready Kitchen: How the US Military Shapes the Way You Eat."

What Marx de Salcedo discovered is astonishing. For decades, the research the military has been doing to ensure tasty, affordable, durable and nonperishable meals for its troops has been making its way into the private sector and shaping many of the every day items on our supermarket shelves. Just take the lunch you made for your kid today. The bread, the cheese, the meat, the granola bar, the juice pouch — these are all items engineered in one way or another by the US military.

Here's how it works: the military has a problem, throws money at it, finds an innovative solution and works with the private sector to get it produced.

"The military actually has a mandate to get the science into our food," says Marx de Salcedo. "That's the thing that most people don't realize. It comes from our longstanding policy of military preparedness. If the [military] shares its food science and technology with the private sector, it can, in the event of some massive future world war, ask those companies to convert their lines to produce rations, or better yet, they're already producing consumer items that are like rations."

One of Marx de Salcedo's favorite examples is the bread on our supermarket shelves. We all know fresh bread goes stale within a few days. The Army used to deal with that by employing whole units of bakers. During WWI and WWII their only job was to churn out fresh bread for the troops. It worked, but it was laborious and expensive. So after WWII, the military set about inventing a canned bread. It funded studies on bacterial enzymes that could withstand heat and continue breaking down starches even after the bread was baked. Voila! Bread with a shelf life.

"It took time to enter the private sector," says Marx de Salcedo, "but now this enzyme thing is huge. It's used routinely in supermarket bread."

In fact, WWII was the catalyst for the rise of food science across the US, according to Salcedo. "In the universe of processed food," she writes, "WWII was the Big Bang."

Another problem the military had was how to reduce its enormous meat bill. In the 1960's, when meat started selling by the box instead of by the carcass, the military investigated the possibility of buying up the cheapest cuts and finding a way to stick them together into recognizable forms like chops and steaks. The technology that grew out of that research is known as "restructured meat."

"That technology quickly entered the fast food industry," Salcedo says. "In fact one of our all-time favorites, the McRib, is a restructured meat product."

Think of other ubiquitous and convenient items, like boxed macaroni and cheese, granola bars, and juice pouches. They have all grown out of ingredients and technology pioneered by military research. And it's not just food, it's packaging too.  During WWII, the military needed synthetic replacements for every day items made from materials that were scarce. One was cellophane, made from plant-based cellulose. Marx de Salcedo tells how classified research on polymers at Brooklyn Polytechnic Institute led to the development of a cling wrap based on the Saran polymer invented by Dow Chemical. Saran Wrap went on the market shortly after the war.

The research that went into "Combat-Ready Kitchen" appears to be meticulous and exhaustive, and the narrative is fair-minded. Marx de Salcedo may be critical of how much highly processed food has entered our diets this way, but her narrative helps us understand just how it happened. If anything, she simply wants us to stop and consider the realities of our food supply.

"That's what my book is about," she says. "My book is saying, 'Hey, wait a second. A lot of our food comes from this military science and technology. Maybe we should stop for a second and assess, and decide is this the course we want to take, or can we separate the consumer food market a little bit from the military one?'"