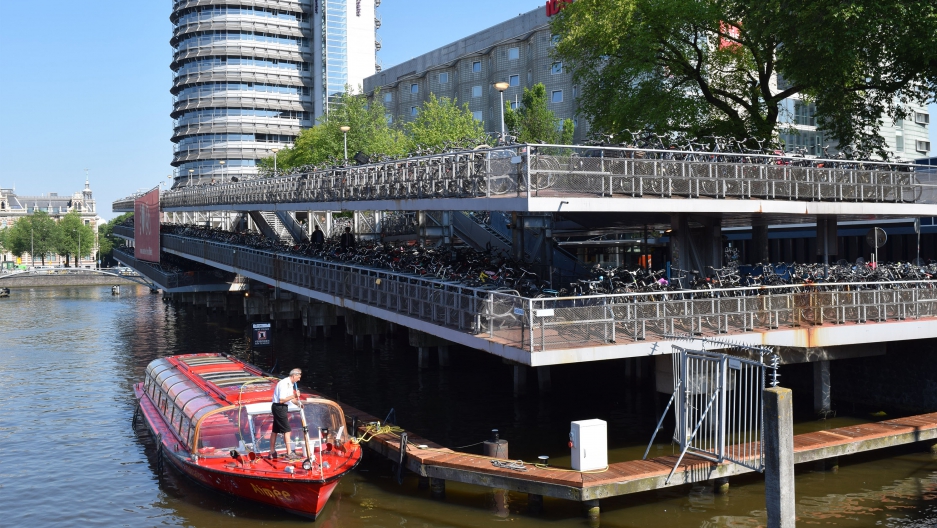 A bike parking lot at Amsterdam Centraal Station is packed with commuter bikes. Municipal workers come through daily to tag and tow bikes that are improperly parked or left for too long.

Amsterdam is well-known as a cyclists' paradise; in fact, there are about 2 million bikes in the city. But that many bikes can clog up the streets and sidewalks. Amsterdam's solution? An entire city department dedicated to removing this bike clutter.

Each day, city employees scour the city for bikes locked up where they shouldn't be. Such bikes are often found at Amsterdam's Centraal Station, whose four-story bike parking garage often fills up, leaving many riders to park illegally. But when the department employees come across one of these bikes, they have only one choice: remove it. Remy Joseph, one of these city-employed bike removers, carries a cordless circular saw with a diamond-tipped blade capable of cutting through even the sturdiest locks. Joseph says he cuts through about 100 of them daily. Most of the time, he’s dealing with bikes that are parked illegally, left parked for more than 14 days or blocking a pathway.

This line of work doesn’t exactly make Joseph and his team popular. His boss, Ron DeLang, agrees. “A lot of people don’t like us,” he says, referring to the team of bike removers. “But it’s only the people who lost their bicycles.” In total, the department removed about 68,000 bicycles like this last year.

Joseph then drives the removed bikes a half-hour outside town, to the Bike Depot: a meticulously organized, giant parking lot filled entirely with bikes. They’re organized by category; for example, all the wrongly-parked bikes are together, and the abandoned bikes inhabit a shared field. Pieter Berkhout, the Depot’s director, says owners have six weeks to reclaim their bikes, and most do. 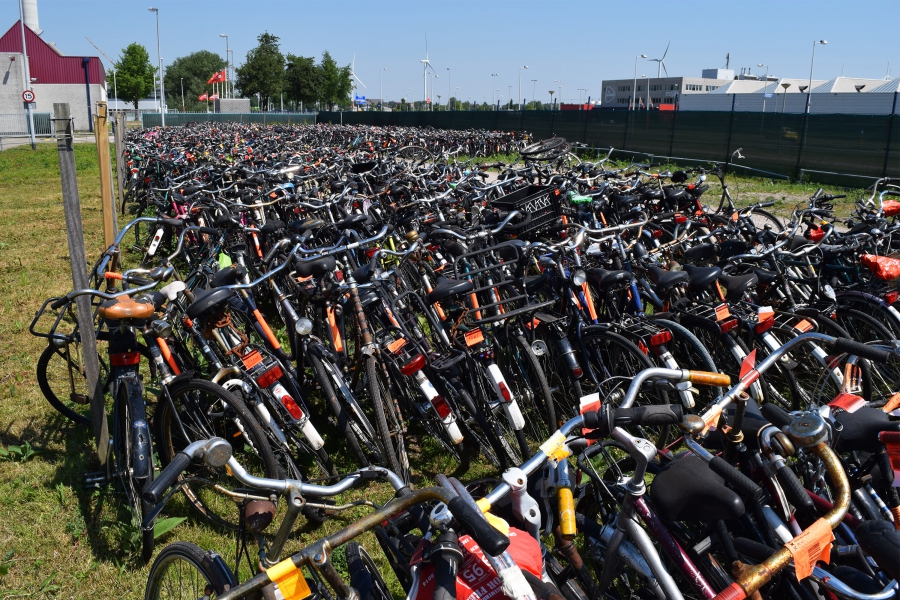 The towed bikes end up at the the bike depot, Fietsdepot, where they are held for six weeks. 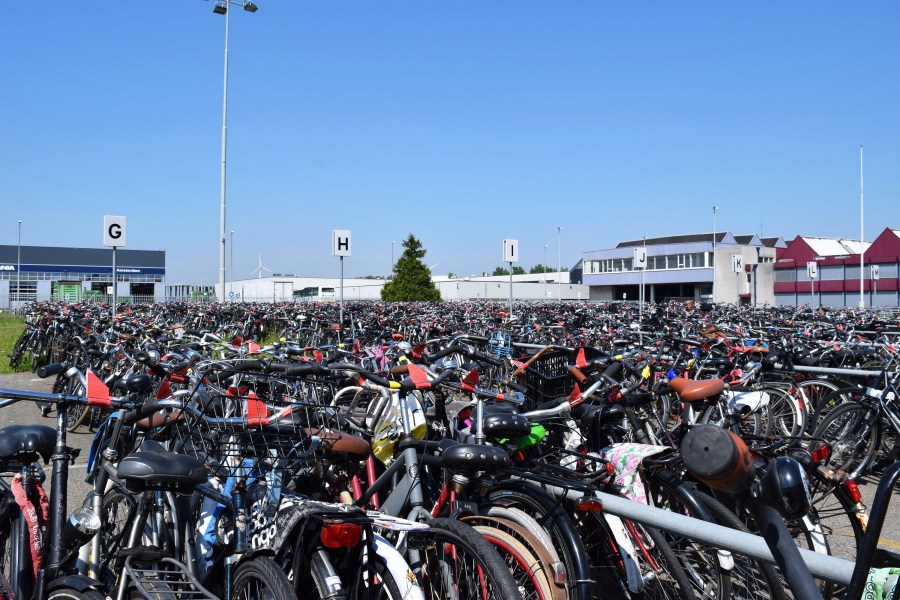 If bikes aren't picked up, unclaimed bikes in good condition are sold in wholesale lots. The rest are relegated to the junk heap and recycled for scrap.

But unclaimed bikes have a different fate. Berkhout says some are reused, and others recycled. Some are even sent to refugee camps in Jordan. And for the nicest among the unclaimed bikes — the ones that look like they could be brand new? Those are resold to local bike shops.

How could so many people just abandon a new bicycle? Berkhout says that even five years of working as director, he has trouble understanding the rationale. “People see it as a product which you can throw away,” he says. “It’s like a paper cup.” 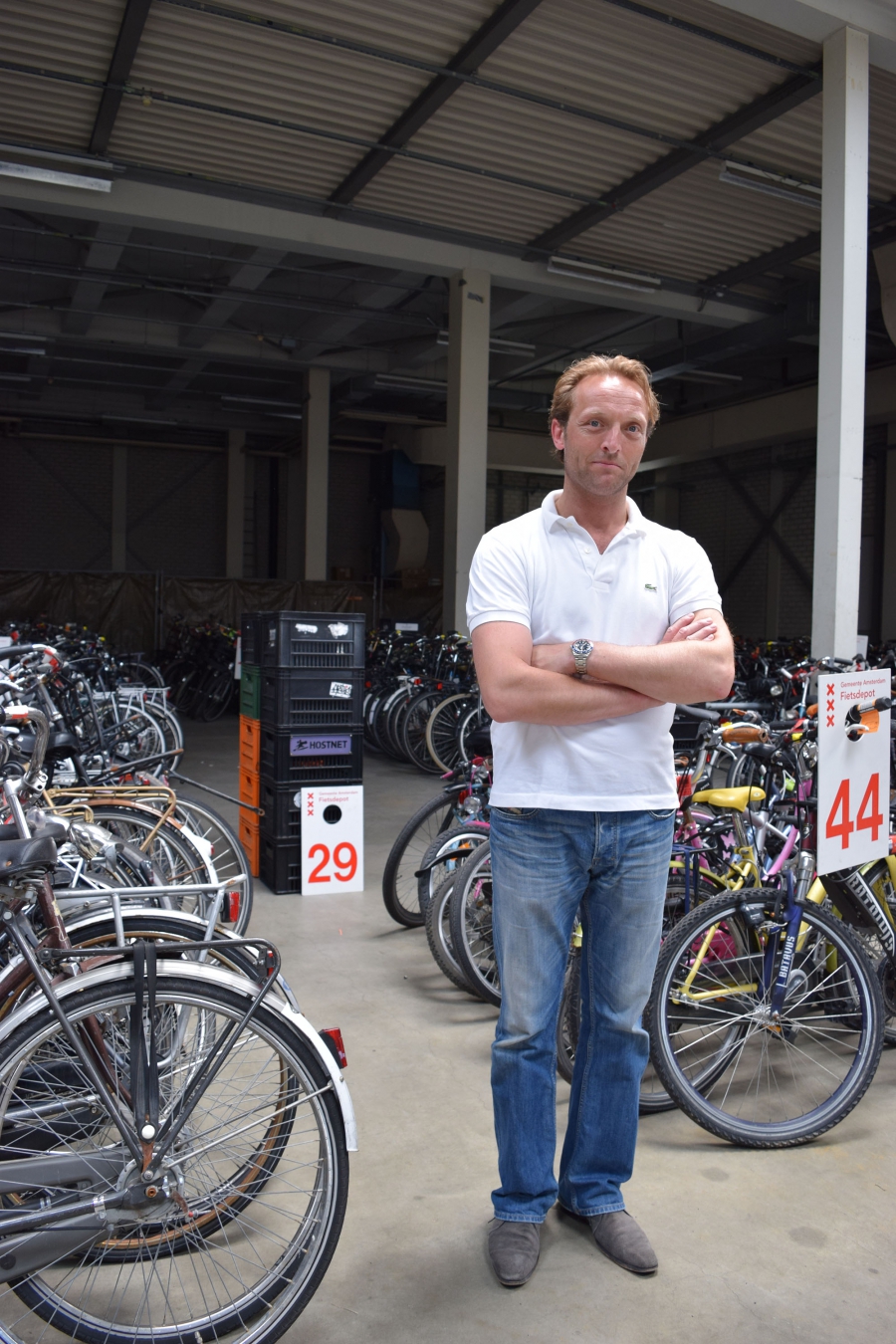 Pieter Berkhout, the man in charge at the Bike Depot

City workers like Joseph don’t make it difficult to track down a towed bicycle. Before taking the bike to the Depot, Joseph enters the data about the bike removal (such as the time and location of the removal, plus the type of bike), and a picture, into a searchable database.

The database helps cyclists track down and reclaim their bikes more easily. But it doesn’t help that, after reuniting with your bike, the ride back to Amsterdam from the Bike Depot provides miles of solitary embarrassment. Some people in Amsterdam even refer to this as the “Ride of Shame.”

Berkhout sees a bike-sharing program — already popular in cities like Paris, Boston and Minneapolis — as a potential fix to the parking problem. If people could take a bike and leave it at a station elsewhere in the city, no one would need to park illegally, thus eliminating the need for removal and storage (and for the Ride of Shame).

Residents tried to start a bike-share program in the 1960s, but it failed. Now, young entrepreneurs in Amsterdam are trying to restart it. With more bikes rolling into the Depot every day, it’s not hard to see why. 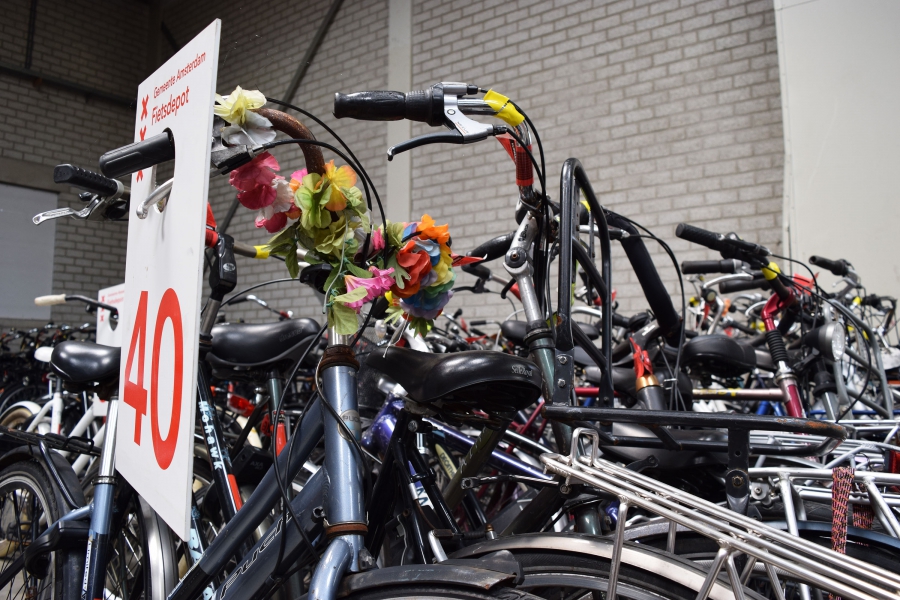 The towed bikes at the Fietsdepot, waiting to be claimed.