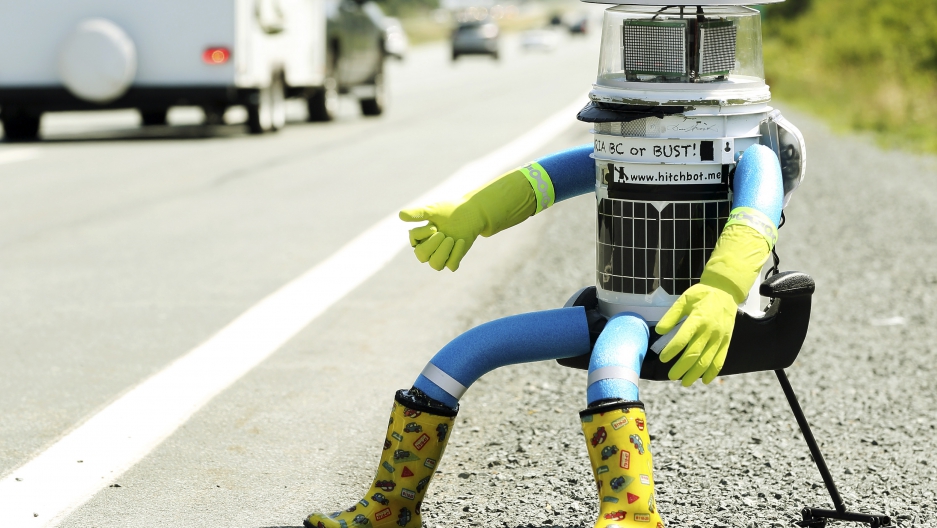 hitchBOT, the hitchhiking robot, was destroyed in Philadelphia.

From On the Road to Travels with Charlie, from The Electric Kool-Aid Acid Test to Wild: the thrill of traveling across America romances many young people every year. This summer, a hitchhiking robot tried to do the same, but a brutal attack in Philadelphia stopped it in its tracks.

The robot in question was hitchBOT, who was created in Canada as part of a social experiment to test whether or not robots can trust humans. The plan was for the robot to hitchhike across the United States, relying on the kindness of altruistic motorists to help it accomplish its bucket list. The robot was hoping to see Times Square, “be sleepless in Seattle” and party in Vegas. "I cannot wait to make new friends," it exclaimed on the webpage for its American journey.

HitchBOT had already hitchhiked over 10,000 kilometers across Canada; traveled for ten days throughout Germany; and vacationed in the Netherlands.

My #LoveForAmsterdam can never fade. I may be a robot, but I think I finally know what love is. Thank you @AirCanada! pic.twitter.com/r3SWw2L6BE

I've been having a great trip so far! I've learned that Germans are just as friendly as my Canadian friends. pic.twitter.com/OhVlwXmC0I

Next its “family" — composed mostly of programmers, linguists and new media researchers — set its sights on a new journey for hitchBOT: an adventure across the United States.

The trip started off well for hitchBOT. On July 17, the journey began in Salem, Massachusetts. HitchBOT is unable to move on its own, and traveled solo, meaning it was reliant on the kindness of strangers to go anywhere. Within its first few days, hitchBOT went to a Red Sox game in Boston, and even accomplished its goal of seeing the bright lights of Times Square.

I thought I was bright and flashy, but the lights in Times Square have me beat. Next stop... who knows! pic.twitter.com/EKIQk4J1lB

But then, tragedy struck. At 5:04 p.m. on Saturday, hitchBOT tweeted that it had been damaged. Its body was “beyond repair.” Vandals in Philadelphia had destroyed parts of hitchBOT, and dashed its hopes of making it all the way to its final destination: San Francisco. “Sometimes bad things happen to good robots,” it tweeted, presumably mournfully.

Oh dear, my body was damaged, but I live on with all my friends. Sometimes bad things happen to good robots! #hitchBOTinUSA

The next day, hitchBOT posted a photo on Instagram, reporting that its trip “must come to an end for now,” but that its “love for humans will never fade."

Oh dear, my body was damaged, but I live on back home and with all my friends. I guess sometimes bad things happen to good robots! My trip must come to an end for now, but my love for humans will never fade. Thank you to all my friends: http://goo.gl/rRTSW2

The news about hitchBOT's demise evoked sympathy in many of his fans. There was an outpouring of support on social media from humans apologizing on behalf of their species, with many even calling for revenge.

I'm going to see if I can get the security footage from where @hitchBOT got killed.

@hitchBot This makes me sad. Just. Plain. Sad. Wish I'd had the chance to me ya #hitchBOT pic.twitter.com/e6csxdfWnM

This is why we can't have nice things. RIP @hitchBOT http://t.co/GcqN3hOdHg pic.twitter.com/OFYBR2iXlQ

I'm so sorry on behalf of America, @hitchBOT. We're not all bad, I swear.

In a statement from hitchBOT’s makers, the research team was sympathetic to their fans sadness. “We know that many of hitchBOT’s fans will be disappointed, but we want them to be assured that this great experiment is not over,” they said. “For now we will focus on the question ‘what can be learned from this?’ and explore future adventures for robots and humans.”

The team said they “have no interest in pressing charges or finding the people who vandalized hitchBOT.” Instead, they “wish to remember the good times,” and they “encourage hitchBOT’s friends and fans to do the same.”