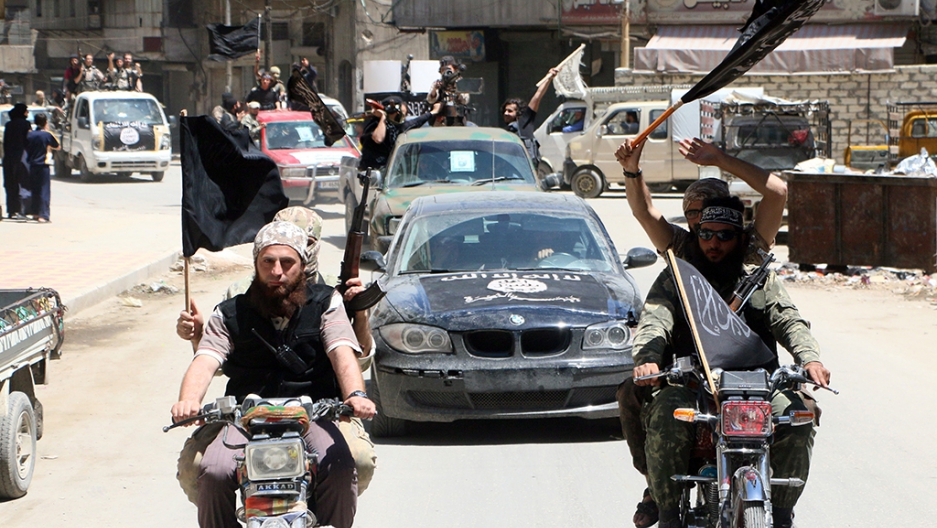 Fighters from Al-Qaeda's Syrian affiliate Al-Nusra Front drive in the northern Syrian city of Aleppo flying Islamist flags as they head to a frontline, on May 26, 2015.
Credit: Fadi al-Halabi
Share

This report is by the Center for Public Integrity, a nonprofit, nonpartisan investigative news organization in Washington, DC.

GAZIANTEP, Turkey — Lieutenant Farhan al-Jassem is not a reluctant soldier, but sadness lurked behind his smile and deep brown eyes when he talked about the last two and a half years he spent trying to fight what he considers the good fight in Syria.

On a sultry July night in a tea garden in southeastern Turkey, Jassem, 29, leaned back in his plastic chair and gulped down several bottles of water as he told the story of how he came to lead a key Syrian brigade receiving training and equipment from a US-organized military coalition to take on the Islamic State. As he spoke, 54 members of the larger division his brigade belonged to were finishing up their training with US Special Operations soldiers at a base located roughly 200 miles to the northwest.

Jassem got his first taste of the country’s roiling civil war in early 2012, when he was conscripted into Syrian leader Bashar al-Assad’s army, but he hated it and bought his way out, paying $400 for permission to visit his home town of Manbij, 40 miles northeast of Aleppo. There, he quickly joined the anti-regime Free Syrian Army, before moving to a smaller Turkmen brigade and then to the so-called 30th Division, created by the United States and its allies as the vanguard of Washington’s effort to roll back the Islamic State’s territorial gains.

When he spoke to the Center for Public Integrity in July, Jassem had passed an initial round of vetting to join the training and said he expected to participate in the next class — so long as the US coalition kept its promises to the first set of graduates, especially a promise that the coalition would “protect us against our enemies after the program ends,” he said.

But Jassem’s fate suddenly took an uncertain turn on July 28, when he was captured by a rival anti-ISIS militia, known as the Nusra Front, which is affiliated with Al Qaeda and therefore an enemy of any Syrian close to Americans. Captured alongside Jassem near the northern Syrian town of Azaz were his division’s commander, 16 graduates of the allied train-and-equip program, and two other division soldiers, according to Aziz Abu Mohammad, a 30th Division commander based in Turkey, who was interviewed by telephone.

This capture was a cataclysmic event for the division, by all accounts, and a grave setback for the US train and equip program, which will now certainly face steeper challenges in recruiting new fighters and maintaining their morale.

But Jassem’s story — the arc of his military service and its apparently grim end — is also a lesson that a deepening US involvement in this complex territorial conflict comes with many risks, both political ones and for the fighters, personal ones, since any association with Americans or the West can carry a problematic stigma on the other side of Turkey’s border with Syria.

Most enticing to the recruits of the program, Jassem said, was the prospect of getting satellite phones connected to vehicles, with which they could call in airstrikes from coalition warplanes when needed.

Fighting for his country was not always part of Jassem’s plan. He briefly studied Arabic literature in university before dropping out to move to Greece and work there for several years. When protests against Syrian President Bashar Assad began back home in Syria, he joined similar demonstrations in front of the Syrian embassy in Athens, where he began to make contacts within the nascent armed Syrian opposition.

Jassem, who has a medium build, playful grin, close-cropped black hair, and bushy black eyebrows, said he was aware of the risks of joining the US-led coalition effort. Graduates of the train and equip program would be returning to Syria “with targets on their backs,” he said.

Nusra and other rebel groups, they knew, targeted recipients of foreign aid not just because of their anti-Western ideology, but also because they coveted the M16s and anti-tank guided missiles that coalition forces provided to other fighters. Even though their handlers from the Pentagon had promised to protect the trainees, Jassem said, it was a purely verbal agreement.

But Jassem said he signed up when one of his superiors from the Turkmen brigade, Col. Nedim al-Hasan, told him last March that the coalition wanted to create a new rebel group that would unite several of the anti-Islamic State brigades that had splintered off of the Free Syrian Army and scattered around eastern Syria after being forced out of their homes by the Islamic State. The colonel, a man he’d fought with for three years, would lead the entire division, which would eventually number more than 1,000 fighters.

The division would be composed of brigades from parts of Syria east of Aleppo, where the Islamic State had become a greater scourge than the Syrian regime, such as Jassem’s hometown. Most were ethnic Turkmens, but some, like Jassem, were Arab. The aim, he said, was to create a force that could funnel recruits into the train and equip program.

The vetting process was intensive, he said, and discomfiting for many. The reason, he was told by fellow recruits, is that candidates for training were interviewed in the second stage while attached to polygraph machines by wires wrapped around their fingers. The questions were simple — had they ever fought for Nusra, for example? But the candidates had heard that similar-looking machines were used to administer shocks to prisoners at Guantanamo Bay, and so the experience was scary. Being subjected to eye and fingerprint scans contributed to their fears. “They felt like laboratory rats,” said Jassem.

Most enticing to the recruits of the program, Jassem said, was the prospect of getting satellite phones connected to vehicles, with which they could call in airstrikes from coalition warplanes when needed. They were also promised M16 rifles, and Jassem said there “had also been talk” of anti-tank weapons and ammunition.

“The coming days will prove whether the coalition is really going to help us” defeat the Islamic State, Jassem said. If the coalition forces keep their promises to protect the first set of trainees, “we expect the number of people in the second training group to increase,” he added.

At the time of his abduction, Jassem was awaiting a second round of vetting to join the program, having already passed the first. He was escorting colleagues heading back to Syria after visiting relatives in Turkey, and so they all had to pass a Nusra checkpoint several miles south of the Turkish border. They thought they had gotten permission to do so from an Egyptian Nusra leader ten days earlier, Abu Mohammad said.

That promise proved false. Mohammad said he heard from a friend in the town of Azaz, where the group was taken after being stopped, that they were paraded through the town with the backs of their shirts pulled over their heads as Nusra fighters shouted that they had “collaborated with the crusader coalition.”

Two days after the group’s capture, a militia group affiliated with Nusra directly attacked the 30th division’s headquarters, killing five other graduates of the program, Abu Mohammed said. Coalition warplanes reacted to both incidents by bombing the headquarters of Nusra in Azaz, he added, a claim that the Pentagon declined to confirm. Hours after the raids, he told the Center through an interpreter that Nusra’s reaction will likely be to execute the detainees it already has in hand and “finish” the 30th Division. “Especially now … their fate is sealed.”

Pentagon spokeswoman Elissa Smith contested Abu Mohammad’s claim that any graduates of the train and equip program were detained in Tuesday’s kidnapping, but said she had no further information to provide about it. She acknowledged that the 30th Division and its trainees were also attacked on July 31, and said that the coalition had supported them with defensive airstrikes, but would not confirm that it occurred in Azaz and said the attacking force was “unknown.”

US Marine Corps Brig. Gen. Kevin J. Killea, chief of staff of the US combined joint task force carrying out anti-Islamic State operations, told Pentagon media on July 31 that he had no knowledge of any abducted or injured trainees. All anti-Islamic State forces in Syria “that are credible, reliable partners,” said Killea, “will receive coalition support as is required.”