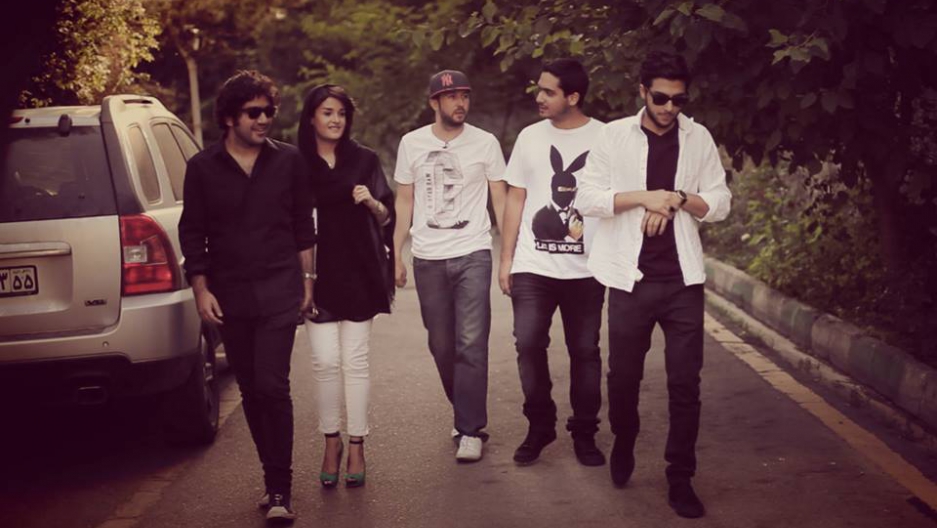 "Our group was the first group that used what they call explicit language in Iranian music."

So says Alireza Jazayeri, a rapper whose stage name is Alireza JJ, who originally gained fame as a member of a hip-hop group called Zedbazi, "Even before the revolution there was no explicit language or curse words in art. We were the first who actually brought it to mainstream, like they did in American hip-hop in the late 80s."

The Iranian rap scene blew up in the mid 2000s in Tehran. Zedbazi formed in 2002, in the middle of this boom, and steadily gained popularity through the 2000s with their controversial language and lyrics.

"Now rap is undoubtedly the most popular genre of music among 18-25 year old Iranians. Even 13-17 rap is like the main thing teenagers like to listen to," said Jazayeri.

If you listen to Iranian rap and hip-hop you'll hear frequent references to 021, the area code for Tehran and calling card for Iranian rap as a whole. "I want you to throw your hands up high, higher/ throw 021 up forever" raps Hichkas, lauded as the godfather of Iranian rap, in his 2008 song Bunch of Soldiers.

But not all Iranian rappers live in the 021. Jazayeri and his group are currently based in France: "I don't think in the near future we're going to be legal musicians in Iran," he said.

All musicians in Iran must have their music approved by the Ministry of Culture and Islamic Guidance to legally produce or perform music. The rules are strict and the stamp of approval is hard to come by. In 2010 the deputy of the ministry stated that only 20 percent of music reviewed receives approval.

Inside the country Iranian rappers have formed a lively underground music scene. Djs mix beats in their bedrooms, rappers record in basements, and everything is shared for free online.

"I would say inside of Iran 99 percent of rappers are working underground. They're not exactly being arrested but they can't legally perform or sell their music," explained Jazayeri. Some musicians have faced difficulties: Hichkas currently lives outside Iran after an arrest and trouble with authorities. Rapper Shahin Najafi fled to Germany after a fatwa was issued against him for rapping about a revered imam.

"Iranian Hip-hop is at a very interesting stage of its life. But in the process of it becoming the most popular genre of music among the Iranian youth it went through a lot of transformation," commented rapper Salome MC, hailed as Iran's first female rapper, who now lives in Japan. "It started from one website and few people that put their songs in it. Then it turned into something bigger that none of us could probably foresee back then."

Those who identify themselves as part of the 021 or Iranian hip-hop have formed an international musical community: collaborating on music, performing at "virtual shows" projected on computer screens, and promoting each others' work from Paris to London to Tehran.

"Because we record outside of Iran and we don't do any political stuff, they just consider us foreign artists who use the Persian language," said Jazayeri, "We are not Iranian artists in the eyes of the government because Iranian artists have to have permissions to sell records and give concerts in Iran, and I don't see us getting that anytime soon."

Jazayeri says his hope for the future of Iranian rap is that it becomes legal, and that his music will become legal.

And with the recent Iranian nuclear deal, things may soon be changing. Trade will increase between the US and Iran, and travel between the two countries may become easier.

"I doubt there will be a grand culture shock, at least for the middle to upper class," Said Salome MC, "but the changes in economy as the key element of a social structure will effect everything, and hip hop will be one for sure. Will we have live hip-hop shows? I doubt it will happen in the near future, but I do think that once we have a bigger middle class and less people in poverty line, the demand for a more free public domain will increase, more people will start to realize the lack of human rights and make an issue off of it."

"I don't know what will happen," concludes Jazayeri, "I think when Iran's doors begin to open to the west there are some things that are going to change for sure. I think they're going to be more relaxed in some areas especially with a lot of foreign investors and people coming in and tourists. But that's going to take time. A country doesn't do a 180 in just a few years time so we'll see. But I'm optimistic. It was a good deal, and it was great for Iran I think."