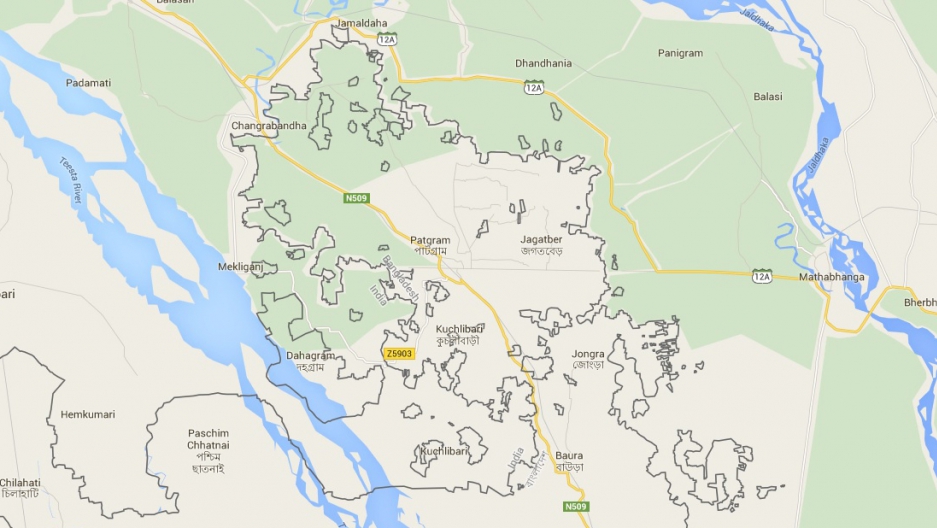 A portion of the old border between India and Bangladesh

Imagine if the town you lived in was surrounded by a county that actually belonged to a different state. But that alien county was an enclave within the borders of your own state. An enclave within an enclave.

Now imagine instead of states you’re talking nations, and those lines on the map are international boundaries.

The result has been that the 50,000 or so people in these enclaves on the border between India and Bangladesh have been effectively without basic services for almost 70 years.

The BBC’s Sanjoy Majumder lists off the things they lack like this: “no electricity, no water supply, no proper schools, no police station, no post office.”

Majumder was just in the region last week. He says it’s hard to realize it when you’re on the ground. “When you look at it, nothing looks any different. It’s the same landscape, but there’s an imaginary line in the sand, if you will.”

“Literally,” he adds, “when I walked across from what was at the time Indian territory into an enclave which was supposedly Bangladeshi territory, there was nothing to tell me I’d made that journey except for a faded stone marker somewhere on the ground, which someone had to scrape out to point out to me.”

The only difference was the lack of services. “They would point to houses a short distance away, and say ‘well, look that’s India and you can see that they’ve got power lines bringing electricity into their homes.’”

The key priority for the inhabitants now is to get ID papers for the first time, so they can get access to services such as health care and schooling without risk of getting arrested. In the past, they could be jailed for being illegal migrants, just because they crossed the frontier to get to a hospital.

The people of the region all share the same religion and language. The border madness has its roots in the 18th century when rival princes traded estates back and forth, and nobody cared much so long as taxes were paid. Then in 1947 the old British Indian empire dissolved: India became independent but Muslim regions broke away to form the new nation of Pakistan. Later Bangladesh seceded from Pakistan. But until Saturday, the border issue had been unresolved.