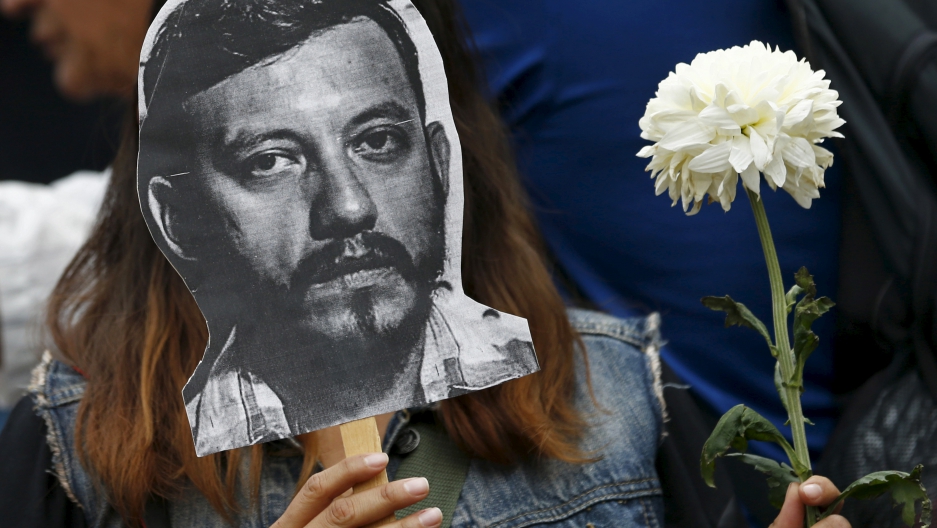 An activist holds up a picture of photojournalist Ruben Espinosa during a protest Sunday against his slaying at the Angel of Independence monument in Mexico City. The prominent Mexican newsphotographer was among five people found dead in a middle-class neighborhood of the capital on Friday, the city's prosecutor said. Espinosa, who a month ago claimed in interviews that he felt threatened by the governor of eastern Veracruz state, was the lone male among five victims that police discovered bound and shot in the head in the capital's Narvarte neighborhood.

First came the threats. Then the harassment. He had to leave.

You see, Ruben Espinosa, a photographer for Proceso, Mexico's leading newsweekly, had offended the governor of Mexico's Veracruz state. And in a nation where 43 college students can be killed without punishment, it is "complicated" to do journalism in Mexico, he once said.

According to the Committee To Protect Journalists, 11 journalists already had been killed during Javier Duarte's six years of rule in Veracruz. On Friday, Espinosa, who fled Veracruz in June, was among five people found killed in a Mexico City apartment. The dead included a community organizer from Veracruz named Nadia Vera, 32; a student, Yesenia Quiróz, 18; and two other unidentified women. Espinosa sustained severe injuries to his face before he was killed, says Dario Ramirez, head of the free press group Article 19.

The threats had forced Espinosa to leave his state, and Vera, who also had fled Veracruz after denouncing Duarte's government, had been trying to help Espinosa resettle.

"I had to come (to Mexico City) in a context of violence that journalists in Veracruz have to live under," Espinosa said in his last recorded interview.

This case reinforces the notion that Mexico is not a state where the rule of law prevails. Journalists and activists are exposing many of Mexico's struggles with corruption and impunity and a sense — reinforced by the escape of the nation's biggest druglord — that everything is for sale. And these days, outright repression and threats to the press and activists all around Mexico are becoming increasingly common.

The volume of killings of journalists in the Gulf of Mexico state of Veracruz alone resembles something from another hemisphere — Iraq, perhaps, or Syria or Somalia. At the same time, many media outlets in Mexico are too terrified to report or denounce the slayings of colleagues.

Over the weekend police in Mexico City said they will be investigating all leads.

“To be honest we’re doubtful,” says Sebastian Aquirre, who's also with Article 19, the advocacy group that monitors journalists' safety in Mexico. “The authorities who are supposed to investigate all probable leads, don’t actually investigate the link between their work and the aggressions. For the police it’s easier to link it toward general crime, toward a personal issue, but they never fully investigate their publications, the people they were talking to, their sources, they never investigate what they were working on as a probable link to their murders, or the attacks.”

Aquirre says that during a protest march/vigil held on Sunday, people were demanding justice and a proper investigation to know what actually happened and why. He says few are ever convicted in attacks on journalists. "We’ve documented 88 cases of murders since 2000. So we don’t want this to be another case of impunity. We don’t want this to be another case where the perpetrators do not face trial. We want the family to have answers, they have the right, the people have the right to know what happened and why this happened to Reuben.”

The danger facing Mexican journalists also is reflected in the 2015 World Press Freeedom Index, in which Mexico was ranked 148 out of 180 countries in terms of press freedom. The map, below, was compiled by Reporters Without Borders.

PRI The World's David Leveille also contributed to this report.