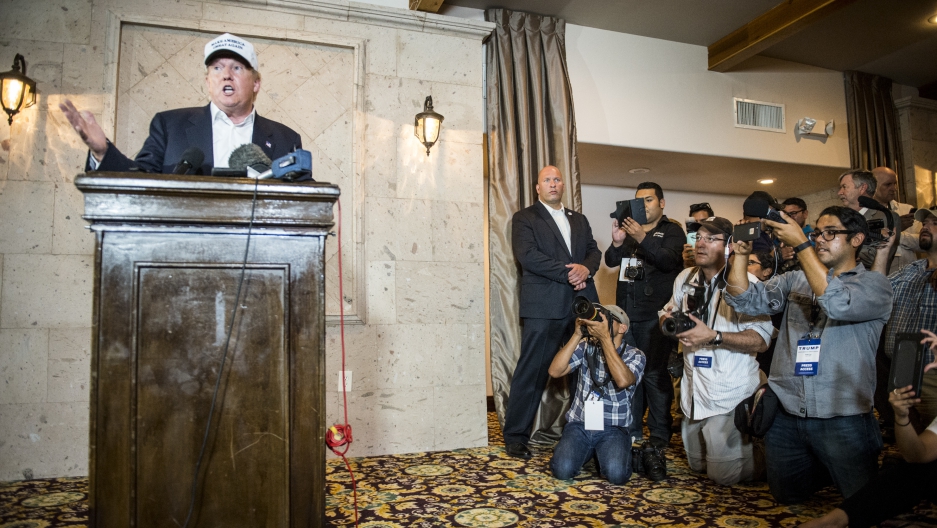 Republican Presidential candidate and business mogul Donald Trump talks to the media at a press conference during his trip to the border on July 23, 2015 in Laredo, Texas.
Credit: Matthew Busch
Share

Since announcing his bid for the White House in mid-June, real estate mogul Donald Trump has stirred up controversy after controversy. Whether he's taking shots at John McCain's military service or sharing a rival Republican's cell phone number, the reality show star has found a way to keep his name in the news cycle.

But no subject has gotten Trump, his supporters, his detractors and the media more riled up than immigration reform. So far, it's the only area where Trump has laid out any real policy prescriptions — he wants to build a wall on the US-Mexican border. It's also been the source of some of Trump's most incendiary rhetoric.

On July 23, the presidential hopeful visited Laredo, Texas to assess the border situation himself. His impression? “There’s great danger with the illegals,” he told reporters. A day later, he appeared on MSNBC to talk about how there were "illegals running past [ABC's] cameras and people running after them. It was a whole mess. They ended up fighting on the ground. It was crazy. And it's all over the place."

Trump has a particular fear of immigrants entering the United States by land across what he calls an "open border." He's now advocating deporting all of the United States' 11 million undocumented immigrants — but has left room for the "good ones" to come back.

"We got to move 'em out, we're going to move 'em back in if they're really good people," he told CNN on Monday.

Immigrant advocates, understandably, bristle at the term "illegal" being used as a noun to refer to people. Legal scholars similarly point out that the usage doesn't have meaning under the law: Actions can be legal or illegal, not people. (Robbing a bank is against the law, but we wouldn't call the bank robber an "illegal.") Using the term is also a way to keep the immigration policy debate focused on law and order as opposed to economic benefits.

But what about using the word in its adjective form to describe a person's undocumented presence in the United States — as in, "illegal immigrant?"

Pew estimated in 2006 that nearly half of the undocumented immigrants in the United States entered the country legally.

That can also be a problem, and not just a semantic one. Immigrants to the United States are either documented or undocumented, meaning they either have the correct immigration papers or they don't.

Those without papers may have entered illegally, but their undocumented status once in the country isn't generally some kind of ongoing crime. And then there are those who have entered the country lawfully — lots of them — but overstayed their visas. They have committed a civil offense and face deportation, but that doesn't make them criminals.

Pew research estimated in 2006 that nearly half of the undocumented immigrants in the United States fall into this category of above-board travelers.

"Under federal immigration laws, the only time it becomes a criminal offense is if a person comes across the border intentionally without any papers," says Victor Romero, an associate dean and professor of law at Penn State University. "But if you're just in the US and they find you and you don't have documents that is not a criminal offense. It's civil."

So, those who overstay their visas have only done something illegal in the way someone who jaywalks or speeds has. Calling undocumented immigrants as a whole "illegal" confuses these important distinctions — and many agree it also targets immigrants in unfair and dangerous ways.

"It's a matter of due process," Romero adds. "Unless you see someone crossing the border and you can prove they don't have papers, you really don't know if someone came here unlawfully."

For Trump, of course, this discussion may be a little too nuanced. So long as his supporters keep cheering — and the media keep indulging him — you can expect he'll keep using a term that has a long history of being used to dehumanize people who often live at the margins of society.