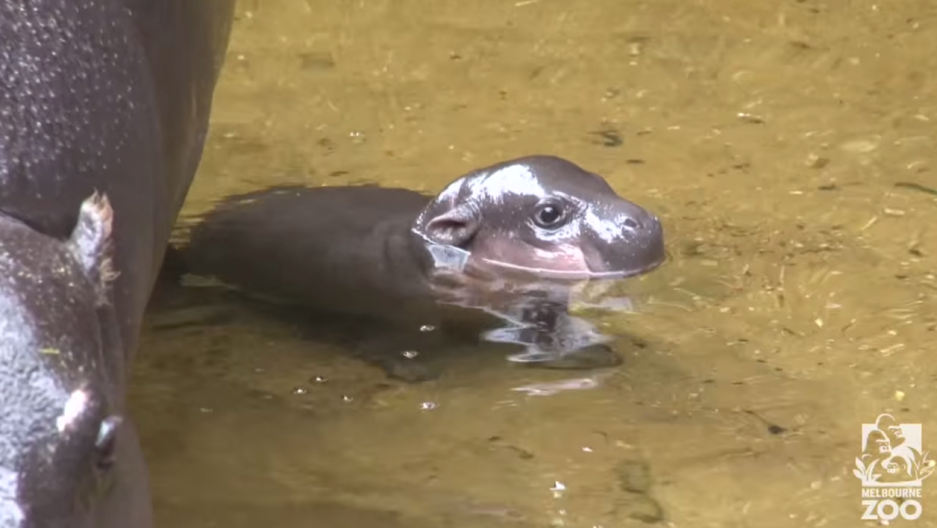 Editor's note: This story was published on July 31, 2015. But really, isn't any Friday a good time to check out Obi and his mom?

You had to keep up with the Iran nuclear deal. (Spoiler: it's going to be in your news feed for a while.) Then you had to read all about about Turkey bombing the Islamic State AND the PKK, a Kurdish separatist group that's been trying to peel off from Turkey for decades and that's been very effective in fighting the Islamic State alongside other Kurds from Syria and Iraq.

And then there was Cecil. Poor, poor Cecil.

Well now it's Friday. You made it. And you deserve a happy animal video.

Your reward is this: a video of baby pygmy hippopotamus learning to swim alongside its mother at the Melbourne Zoo.

That shiny little loaf of cuteness is named Obi, and when the Melbourne Zoo posted the video in mid-June he was three weeks old and weighed around six tiny little pounds — up from 2.25 pounds at birth.

According to a government website for zoos in the Australian state of Victoria, Obi had been "learning to swim in the nursery yard pool and passed with flying colors" and he was prepared for the next step: venturing into "the deeper water of the exhitit."

Obi's mom, Petre, stuck by his side as he figured the whole swimming thing out.

Pgymy hippos, which grow to approximately 1/4 the size of full-grown hippos, are native to West Africa. They're endangered in the wild. As few as 2,000 are still alive outside of zoos.