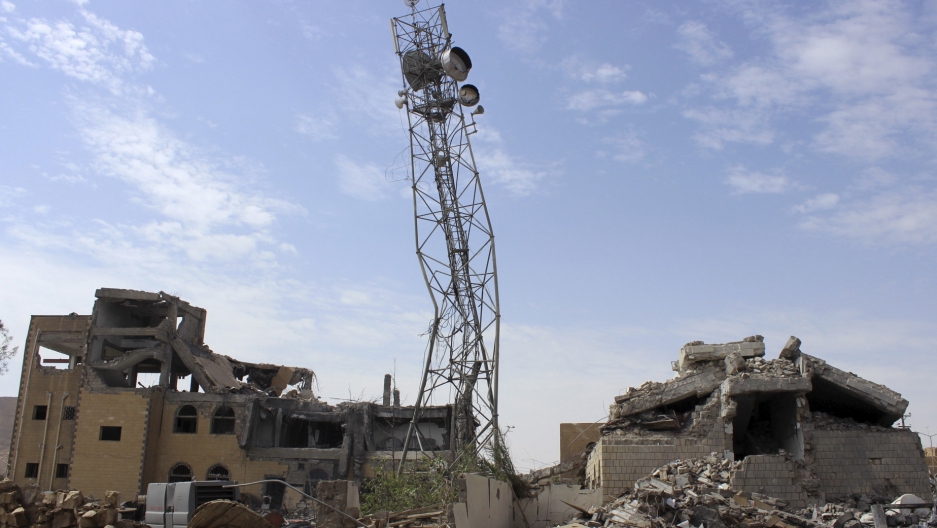 A telecommunications center was destroyed by a recent Saudi-led air strike, Yemen's northwestern city of Saada, May 2015.

Continued fighting between Houthi rebels and other groups on the ground, along with frequent air strikes from the Saudi-led coalition has prevented the delivery of humanitarian supplies. It has also kept out Western journalists. It's just too dangerous — plus, the Saudis are not allowing journalists into the country. But, that didn't deter Canadian reporter Matthieu Aikins.

Aikins hired a smuggler to take him into Yemen — at night, by powerboat from Djibouti in East Africa. Then he traveled over pockmarked roads to the Houthi-held capital Sanaa, and onto the stronghold of the Houthi rebels, Saada province in the Yemeni north. Aikins wrote about what he saw in an article published by Rolling Stone.

"The road that we went in on was being targeted by coalition jets," Aikins says. "There were charred vehicles, dead goats along the way." A truckload of goats had been hit by a Saudi air strike. Aikins says he was not ready for what he saw when he arrived in Saada, the regional capital.

"Saada City is just bombed into rubble," Aikins says. He confirms earlier reports by Human Rights Watch that Saudi jets have leveled much of the city. "They've hit schools, houses, government buildings, markets, restaurants. Basically targeting anything that moves, in the words of one person there."

Aikins says the humanitarian crisis in Yemen is hard to miss. "There's over a million Yemenis displaced. The UN has warned that six million are on the brink of starvation, that a famine is right around the corner. But because of the blockade and the evacuation of internationals (from) the conflict, the UN and other international humanitarian agencies have really been slow to respond."

Aikins says he saw refugees camping out in the open and that they weren't given food or water.

"And of course what's on everyone's mind is the fate of other wars that began with uprisings in the Arab Spring," Aikins adds. He says Yemenis see what has happened to civilians caught between warring factions in Libya, Syria and in Iraq, which is related to the US invasion of the region.

"There is incredible suffering," he says, "and that is part of the reason why we're having this massive migration and refugee crisis today. So if you look at these examples — in Libya, Syria and Iraq — it's hard not to feel very pessimistic about Yemen's future, that this could get just as bad as those places and the world would just stand by, helplessly or cynically."

CORRECTION: An earlier version of this story identified reporter Matthieu Aikins as American. He is Canadian.