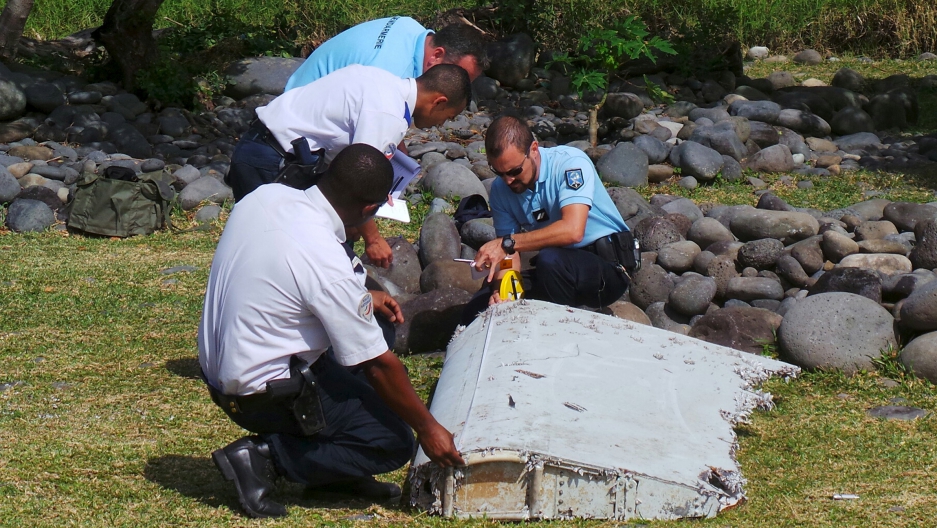 French gendarmes and police inspect a piece of plane debris found on a beach on the French Indian Ocean island of La Reunion.

A fragment of a plane wing is on its way to Toulouse in France after being recovered from a beach on the French Indian Ocean island of Reunion.

There is speculation that it may be from Malaysia Airlines flight 370, which vanished over the Indian Ocean in March 2014, more than 3000 miles from the beaches of Reunion.

In Toulouse, investigators will begin the identification process.

“They’ll start,” says aviation expert Dai Whittingham, "by looking for any identification marks that have come up during manufacture. It’s a rotable part, in other words it’s replaceable, and for that reason there will be a tracking plate on it.”

Whittingham is head of the UK’s Flight Safety Committee, and a former senior officer in Britain’s Royal Air Force.

“That’s to allow the manufacturers to go back and engineer out any defects that might have come in; or to replace when they get fatigue cracking or something like that. That’s normal business with aviation. And it also allows them to make sure parts aren’t being extended beyond their design life.”

(The same digital tracking of parts also occurs in most new cars as well, incidentally.)

Whittingham says we can’t assume the wreckage is from MH370, “although all the evidence is pointing in that direction. It looks very much like from the drawings and photographs that it’s a 777 part.” He says it’s impossible this could have accidentally fallen off another plane, because there is a thorough international system for recording those kinds of equipment failures.

The fragment recovered this week may possibly contain clues to the cause of the crash.

“For example,” says Whittingham, “you might find signs of sooting on it, which would show an airborne fire. It may be that you find signs of a failure in the metal or the construction itself, which can show there was a fatigue failure. I don’t think that’s particularly likely in this case. Or, as we saw in the case of MH17 (over Ukraine), clear signs of a strike with high speed missile fragments, but I don’t think we’re into that scenario.”

“It may tell us,” he adds, “a little bit about the speed that the aircraft was doing when it hit the water — assuming it did hit the water, which appears to be the case.”

But in terms of finding out exactly what caused the crash of MH370, Whittingham says “you’ve got one small part of the jigsaw, a very small part.”

“Until they find the flight recorders, we’re really not going to know what happened to that aeroplane.”

Could plane wreckage washed up on an Indian Ocean island be from #MH370? http://t.co/uUKprCOySh pic.twitter.com/2JNXw7FkRW

The discovery of the part, known as a flaperon, could finally bring some measure of closure to Bimal Sharma, a captain with India's merchant Navy whose sister, Chandrika, was a passenger on flight 370.

“There have been so many stories, and so many theories, and so many unanswered questions,” he says. “My entire family is watching this very closely, everybody in my family and that includes Chandrika's mother. She's 90 years old. I mean, it could be any wreckage, it could be another aircraft, I don’t know, they haven't come out with anything concrete. It’s been a roller coaster ride.”

Same thing for Grace Subathirai Nathan. She and her family are still hoping to find out what happened to her mother, Anne Daisy.

“We're very shocked and anxious and you just feel like you've been thrown back into that loop one more time, all over again, for the umpteenth time. So I mean we're not ... we're not to say like we're taking it as the truth, because it's happened so many times before so we're wary of the information," she says. "I think we're also holding out hope until it's confirmed and we understand that there's a high likelihood or there's a high chance that this might be it. But, you know, 'til then we still have to hold out hope.”

Searchers also reported finding a badly damaged piece of luggage along the beaches of Reunion. Even if the debris is confirmed to be from MH370, Nathan says she still needs to know ­how and why the plane went down.

Jacquita Gomes' husband was also on board. She says she's not even sure if she wants to hear that this piece of debris belongs to the missing plane.

“One part of me, I want it to be true, yes,  that they have found the aircraft, then we can have some sort of closure, until they bring the whole aircraft back and then I can give my husband the peace that he needs. The other part is that no, let it not be true, because then we can still have hope that there's a chance that the plane is still out there and then they all can come home.”

Australian Jeanette Maguire says the toughest part is not knowing.

She's hoping the debris found this week will help her learn the fate of her sister and brother-in-law. ”We're all longing and waiting so much for any sort of news that is, you know, valid ... but when we get it I think it's going to be another emotional roller coaster.”