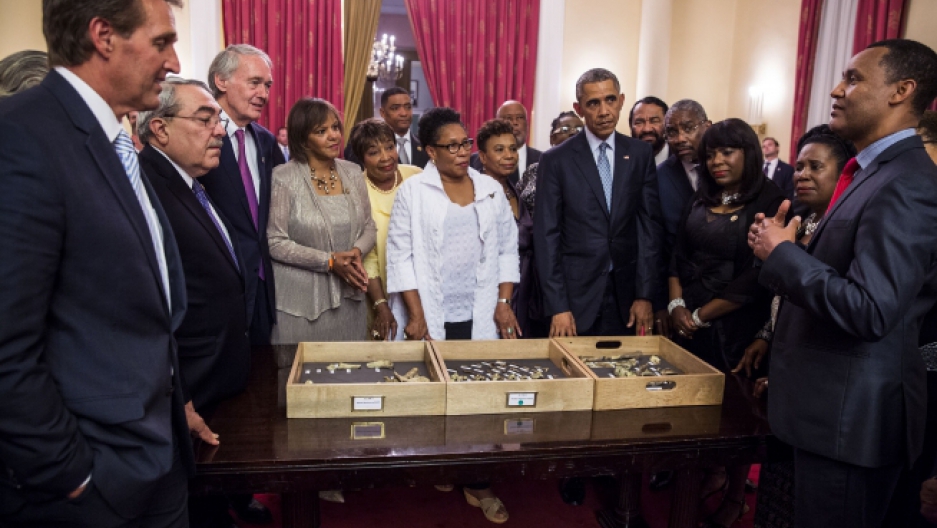 President Barack Obama is back on US soil after touring East Africa for five days. The president used his visit and his popularity to discuss some of the vast issues facing the region.

“He appeared with a spring in his step as he came off Air Force One — there was kind of forward momentum from then on,” says David Smith, Africa correspondent for The Guardian.

Smith followed the president on his trip and said that he didn’t hold back in discussing a variety of issues.

“There were some powerful speeches that really touched a nerve. On Saturday, he really stood up for gay rights in Africa,” he says. “The following day he was equally strong on women’s rights and questioning female genital mutilation.”

But he didn’t stop there.

“He was also very forthright about how it was wrong for leaders to hold onto power for too long,” Smith says.

President Obama delivered the last address of his East African tour Tuesday. At the headquarters of the African Union in the capital of Ethiopia, he spoke to the heads of many African nations, but there were some notable guests absent.

Robert Mugabe, the president of Zimbabwe, was not invited — he is one of the continent's most persistent dictators. In his speech, Obama called on heads-of-state to step down at the end of their terms, and cited Nelson Mandela, who sat only one term as South Africa's president.

To help drive that point home, President Obama even said he thought he could win a third term here in the United States, but said that he will not run because it is against the law.

"All of this went down much better from Barack Obama, the son of an African, than it would have done from any other US president or any other Western leader,” says Smith.

President Obama’s personal story may still be his best asset in the eyes of both the leaders and citizens of East Africa. Smith says Obama took care to use local languages in his speeches, and he made frequent references to his African heritage.

“It certainly seemed as if he was hugely popular, not only with the officials he was meeting but within the wider population,” Smith says. “Since his election in 2008, he’s been a bit of a rockstar in Africa.”

Though Obama is popular in East Africa, some optimism about the first Kenyan American US leader has waned.

“There are certainly some in Africa, who, even after the lift of this visit where Obama made some very powerful statements, would nevertheless say that, overall, [Obama’s presidency] has been a bit of anticlimax for Africa,” Smith says. “In his first term, I think Obama only spent less than 24 hours in sub-Saharan Africa. There have been some more visits this time.”

Though the president has visited the continent more often, some in sub-Saharan Africa say there hasn’t been enough progress made under the Obama Administration.

“He seemed quite miffed that people were questioning the Power Africa project for failing to deliver electricity as promised,” says Smith. “He said, ‘Look, it’s only a couple of years old — you don’t build a power station overnight.’ Some of the real, most concrete benefits of the Obama era for Africa might really yield results after he’s left the White House.”

While Obama stood by his own plan, Smith also said he took time to praise the work of his predecessor: President George W. Bush.

“There was an interesting moment at a press conference on Saturday in Kenya, where Obama himself said that he thinks George Bush’s PEPFAR program combatting HIV/AIDS in Africa is one of the best things any US administration has done for decades,” says Smith. “He said that this is not a beauty contest between presidents — that it’s one US government.”

As Obama moves into the final chapter of his presidency, it’s unclear what attention he’ll be able to give to Africa. But one thing is certain: He’s now visited the continent more often than any other US president.

“There’s no doubt that Barack Obama will be a very hard act to follow in Africa,” Smith says.