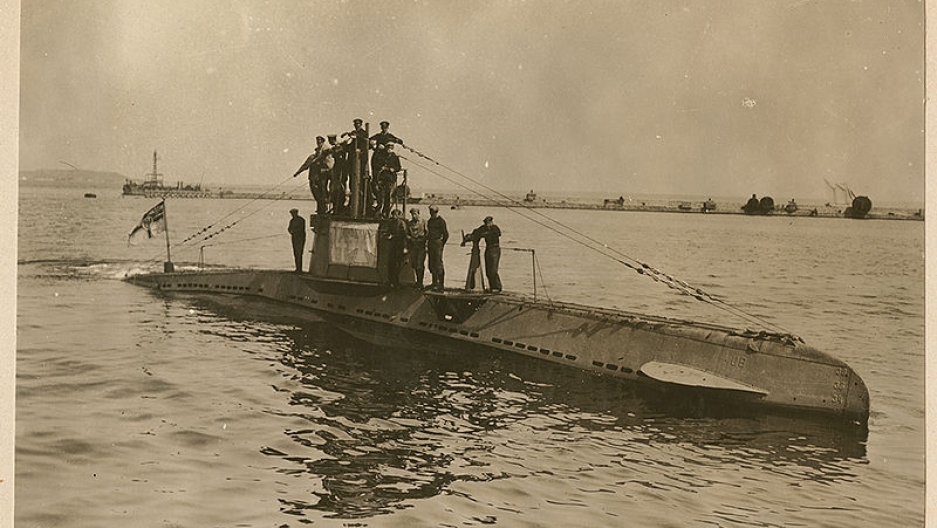 The crew of the German WWI U-boat UB 14 stand atop the submarine on the Black Sea in 1918.

Nauset Beach on Cape Cod in Massachusetts is known for its excellent bass and blues fishing. It's known to surfers as a real destination.

Less known are the dramatic events that took place on this 10-mile stretch of coast in the summer of 1918.

The year 1918 hadn’t been roses. The US was in the midst of a deadly flu pandemic, and was embroiled in the Great War in Europe. But it was summer on Cape Cod. And then — as now — that had its charms.

"It’s a lazy, kind of lackadaisical Sunday morning," said Jake Klim, author of "Attack on Orleans." "It was super hot. It was hazy, there was a little bit of fog in the air. Off the coast, about two to three miles off the coast, a tugboat named the Perth Amboy was chugging south along Cape Cod, tugging four barges."

And then — out of nowhere — the Great War, which was raging thousands of miles away across Europe, arrived on our shore.

After a second something skimmed past, he spied a grey mass emerging from the water — a German U-Boat, with the Perth Amboy and its four barges square in its sights.

"Just as he’s about to yell, 'submarine,' a third projectile comes screaming though the sky and crashes right into the pilothouse," Klim said.

The SM U-156 continued the shelling as the 32 men, women, and children aboard the five ships scrambled into lifeboats. First responders, even regular folks rushed into boats to help hasten their evacuation.

"The aim from the German guns apparently is not very good, and some of these shells go wild and some actually land on the beach and the marshes, and that makes the event significant," Klim said. "It was the only time during the entire First World War that foreign shells landed on American soil."

Despite the perilous, even terrifying situation, a huge crowd gathered along the bluffs and beaches to watch the drama unfold.

"This is sort of very exciting for these guys," Klim said. "They want to watch the show and a lot of newspaper accounts from the time kind of suggest that it was. It was a show and you didn’t even need to use opera glasses to watch the show."

Twenty minutes in, a single Navy plane arrived on the scene, and dropped a single bomb on the U-Boat — the only bomb aboard the early fighter plane.

"The bomb lands perfectly," Klim said. "Had it exploded, it would have caused great distress to the submariners."

But it didn’t. Nor did the bombs dropped by the other planes that arrived later. But it was enough to scare off the U-156, which after 90 minutes of shelling, submerged and headed north. Klim says no one captured the spirit of the day better than 10-year-old Jack Ainsleigh, a passenger on a barge who spent his lifeboat ride to shore boldly shaking a large American flag at the U-Boat.

"Upwards of a thousand people on the beach now, and they just about lose it when they see this. This is just the coolest thing they’ve ever seen," Klim said. "This 10-year-old boy waving this American flag at the Germans and they erupt into applause."

In the end, no one was killed and only two men were injured. Three of the four barges were sunk, but the Perth Amboy, though battered and bruised, lived to tug another day. In fact, years later, it again proved to be a thorn in the German’s side.

"It actually was sold to Great Britain during World War II," Klim said. "And helped evacuate French citizens during the evacuation of Dunkirk."

As for the SM U-156, it would continue to sink Allied and neutral merchant ships off the coast of Maine and Canada for weeks, but on its return to Germany, it met a grim fate.

"They strike a mine off the coast of Norway and the submarine goes to the bottom of the sea," Klim said. "There’s rumors that a handful of sailors survived, but it’s just a rumor."