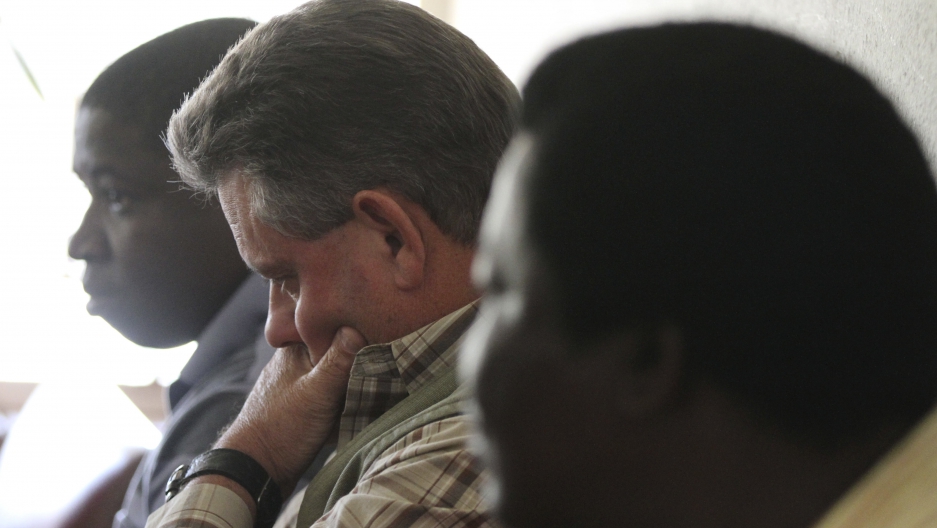 Zimbabwean hunter Theo Bronkhorst (center) waits to appear in Hwange magistrates court. Bronkhorst is one of the two Zimbabwean men who were paid $50,000 by an American hunter who killed "Cecil," the country's best-known lion.

Outrage over the killing of a well-known lion in Zimbabwe has been loud. So loud, in fact, and so amplified by social media that Dr. Walter Palmer had to suspend his Minnesota dental practice after admitting to hunting down the feline icon named Cecil.

The big cat's death is leading some in Zimbabwe to speak out against the practice of big game hunting.

Johnny Rodrigues, who chairs the Zimbabwe Conservation Task Force in Harare says he frequently saw Cecil in the bush.

"A lot of people have got memories and this is why you find there's an outcry in the world, not only because he got killed but it's the manner in which he got killed," Rodrigues says.

Palmer spent more than $50,000 on a hunting trip to Zimbabwe. Cecil was wearing a GPS tracking collar and lived in a protected state park. The hunters apparently lured the lion out of the park with bait. That's a practice Rodrigues says he's seen before.

"I've witnessed it myself where a guy kills an impala, and drags it behind his car to leave a scent, and when they get to the area where it's allowed to hunt, then they put the bait down or hang it up in a tree and the animal can smell it," he explains. "They come to it, and they get shot."

Rodrigues says American trophy hunters are willing to pay for what he calls "canned hunts," where big cats are drugged and released in areas where they can be legally shot.

Many Zimbabweans say the American big game hunters operate outside the law. They want Palmer to return to their country and face charges, according to Rodrigues.

"A simple guy goes and shoots an animal to feed his family and, if he's arrested, it's up to 15 years in prison," he says. "I hope that Mr. Palmer can come and face his music."

Not everyone in Zimbabwe agrees. Peter Johnstone is an avid safari hunter who founded Rosslyn Safaris, in Zimbabwe. It caters to both first-time and experienced hunters, including bow hunters as well as rifle hunters.

“Hwange National Park is bordered, the whole way around, by hunting areas. All the way around!” he points out.

He says the incident doesn't raise any red flags. ”It’s normal for people to put bait traps out to attract leopards or lions or hyenas to come to bait. That brings them in reach of the client hunters, so it was nothing unusual.”

Nor is it illegal to shoot a GPS collared lion or a collared elephant if it’s in a hunting area. “I think it’s overdone where it borders a hunting area. They try to collar every single lion.” Besides, he says, you can’t necessarily see the collar. "If they do shoot it and hand in the collar, then it shows what’s happening to the lion. It’s all part of the management of these animals.”

Johnstone says Cecil’s time was up. “Most lions, by the time they are eight years old or so, have either been killed by other male lions, or by hyenas or have been taken by trophy hunters.” Cecil was believed to be about 13.

Once one of the biggest safari operators in Zimbabwe, Johnstone now mainly offers plains game safaris. Typically, his two-week safaris start at $28,000 and include a professional hunting guide, transportation to hunting sites, meals and, most importantly, a trophy leopard and CITES permit for export out of Zimbabwe, plus a variety of kudu, sable, impala, zebra and warthog.

“I’m just appalled at the fuss that’s built up over this lion being shot. The bad publicity is not doing this country any good,” he says. What’s being lost in all that fuss, he says, is the understanding that Africa’s human population is growing rapidly, and that growth is putting tremendous pressures on its wildlife.

“I promise you that unless there’s a value to the wildlife and the people on the land that the wildlife’s living on, receive some value out of these wild animals, they’ll be swept away. One of the good ways of getting that money is hunting safaris in which the owners of the land, whether they’re settlers or small or big farmers, unless those people gain something from the wildlife, unless the people have actual value in the wildlife, it’s finished.”

Ultimately for the benefit or Africa’s wildlife, Johnstone says, “we should be encouraging hunting, we shouldn’t be screaming and charging against it.”