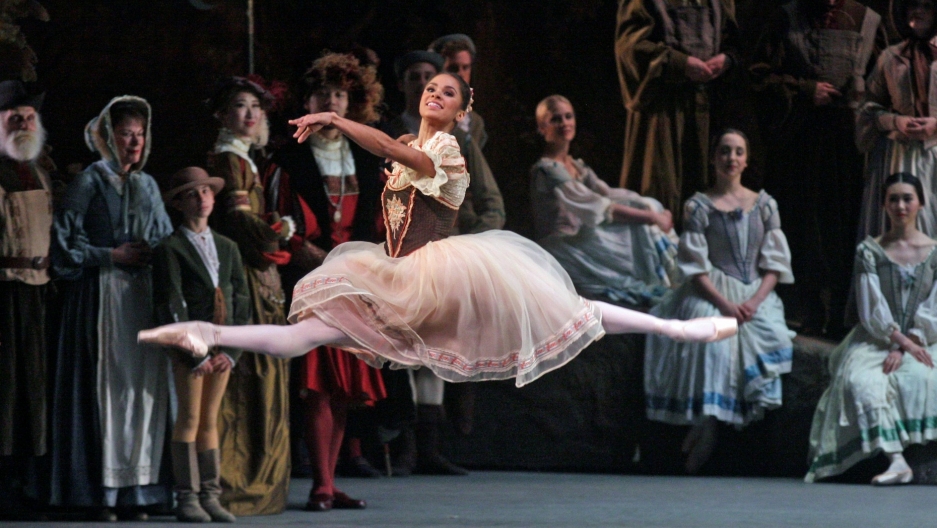 In case you live under arock whereyou haven't heard of Misty Copeland, a quick recap: the newly anointed principal dancer of the American Ballet Theater is having a fantastic year. Earlier this summer, ABT announced that Copeland would be the first African-Americanballerina to dance the famous dual role ofOdette/OdileinSwan Lake,and then went on to make her its first blackprincipal dancer as well. Copeland is an incredible talent, despite starting her ballet studies at the late age of 13, and the author ofa memoir about her unconventional road in ballet,Life in Motion.She has even danced with Prince(yes, thatPrince).

Earlier this month she appeared at WNYC's the Greene Spaceto talk with Raven Wilkinson and Carmen de Lavallade, two othertrailblazing African-American ballerinas, in a conversation moderated by Susan Fales-Hill. Copeland was teary only minutes into the talk, recounting how seeing Wilkinson and de Lavallade had inspired her as a young dancer.

Watch a video of the full evening below.

On history and mentoring:
Growing up in southern California, Copeland always saw herself as just another dancer.It wasn't until she moved to New York to pursue ballet that she noticed she was the only dancer of color in her classes. When she was eventually hired as a member of the company at ABT, she was the only African-American dancer in a company of 80. For a decade. Finding other black dancers was a challenge:"To learn about the history of African-American ballerinas, you really have to dig in and do the research," Copeland says, "it isn't something that's going to be lent to us."

When Copeland watched the Ballet Russesdocumentary (about the pioneering dance company of the same name), she saw Raven Wilkinson for the first time. Seeing Wilkinsonmade her realize she belonged to a historyof black ballerinas, and awakened her desire to be a role model for other young dancers. "It gave me a purpose in a way I didn't know I had before," she says. Copeland now mentors a handful of dancers, including two young men about to graduate high school and join the professional dance world.

On typecasting:
All three dancers said they felt a subtle but constant battle to advocate for their talent as classically trained dancers. When Wilkinson was considering leaving the Ballet Russes company, someone suggested, "Why don't you go out and form a company of your own and do African dance?" The idea seemed far-fetched to Wilkinson, who had spent her whole life in pointe shoes.

Decades later, Copeland felt a similar struggle."I think there's just something ingrained in the ballet culture that you see this skin color and you see a contemporary or a modern dancer," she laments. "And it's just hard to envision that person in a classical role." She was constantly dancing leading roles in modern and contemporary pieces, but not the classical roles that she craved.She came to a crossroads whenshe was offered a soloist contract at the Dance Theater of Harlem. "I was very tempted," Copeland remembers, "and I had to ask myself, 'Would you be satisfied there?' Because ABT was always my dream. And I thought, 'Why let the closed-minded people that think I don't belong at ABT or think I won't succeed there, why let them deter my path?'" Shedecided to stick it out at ABT.

But despite the challenges, Copeland has felt the support of ABT behind her. And even as media attention mounted in the last year as she gained endorsements and published her memoir, she says the focus never translated to pressure. "It felt like a privledge," she says."I was proud to be representing so many people."

Watch the full conversation below: