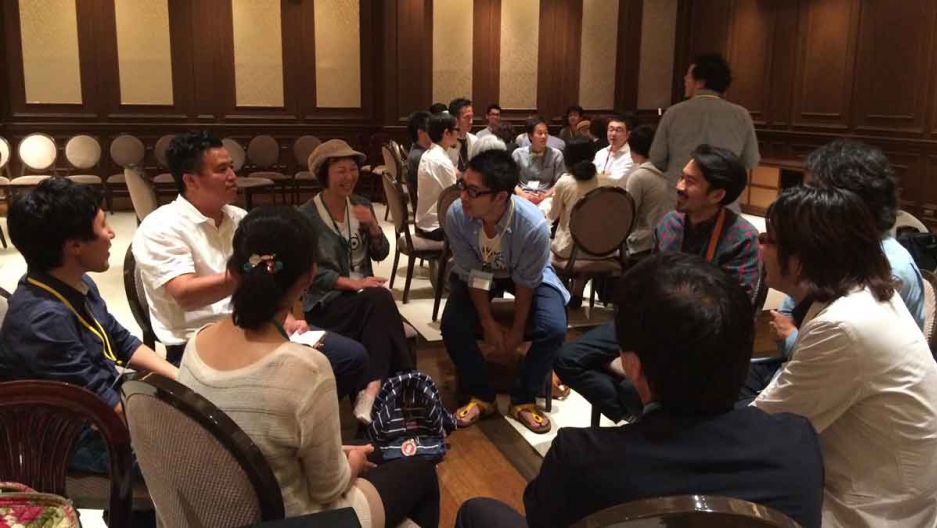 Participants at the Kamacon town meeting break into groups and brainstorm about the potential projects.

It’s pretty common knowledge that the Japanese economy has been sputtering since its heyday in the 1980s. Whole sectors have been slow to innovate and face problems. For years the tech startup scene seemed really bleak.

But more recently there’s been a shift, at least when it comes to startups. And one community in particular has been generating quite a bit of noise, just a bit under the radar.

I decided to check it out and hopped on a local train heading south out of Tokyo. Soon I found myself wandering up a steep path in a bamboo forest, hoping that I was in the right place.

CEO Yuu Sumiyoshi meets me when I finally cross the threshold of the old Japanese house that his company, Murashiki, uses as an office. Think tatami mats and sliding shoji screens.

In 2008, Sumiyoshi moved his young startup from Tokyo to a town just south called Kamakura. It’s an ancient capital of Japan, and until recently, it was mostly known for its famous temples, Buddhas and beaches. Not its tech scene.

Sumiyoshi’s company develops websites and does digital business consulting. One of their most well-known projects is a marketplace for handmade goods called Iichi that they developed and then spun off into a separate company.

Another of his own sites is called Crazy Japan.

The top of the English version reads: “For Kings, Lords and Billionaires of the World. Welcome to Crazy Japan Murashiki: A Marketplace for Everything Crazy and Japanese.”

Here you can buy things like samurai armor for your pet — for only $480,000 —  which Sumiyoshi assures me is the actual price quote he received from a local craftsman.

Sumiyoshi says he started the site because Japan’s been in a rut — economically and with its population. “I wanted to do something to throw off that sense of despair,” he says.

Traditional Japanese companies have been risk-averse, slow to change, and rigidly hierarchical, but Japan, he points out, still has the skill and know-how to make amazing things, especially by fusing together old craft with new technology.

Craig Mod, a writer and designer who works with startups in the US and Japan, says the Japanese startup scene feels a lot more vibrant and alive now. "I’d say there are more companies doing more interesting things and attempting to do it on a global scale than there were five years ago," Mod says.

And the startups that have setup shop in Kamakura are a slightly different breed. You see it in everything from the innovative way they run their businesses to where they even setup their offices.

In 2012, there were seven startups in town, but they rarely saw each other. One night, the CEOs got together over drinks and said, ‘you know, we’re here — we might as well do something together.’ The group thought they could use technology to make Kamakura a better place for everyone.

That was how what’s now referred to as Kamacon Valley was born. The name is a play on Silicon Valley, but people I spoke to say that was an accident. Still, it’s grown on them.

Since then, the number of startups has more than doubled and locals have joined forces with the tech crowd.

Imagine for a moment if big competing tech CEOs in, say, San Francisco got together with local college kids, politicians, teachers, businesses, senior citizens and artists and said 'OK everyone, we want to do projects for the community, what do you want to do? Oh, and we’ll help, pro-bono.'

It’s not exactly common. And especially not in San Francisco, where tech companies are increasingly disconnected and at odds with local communities. 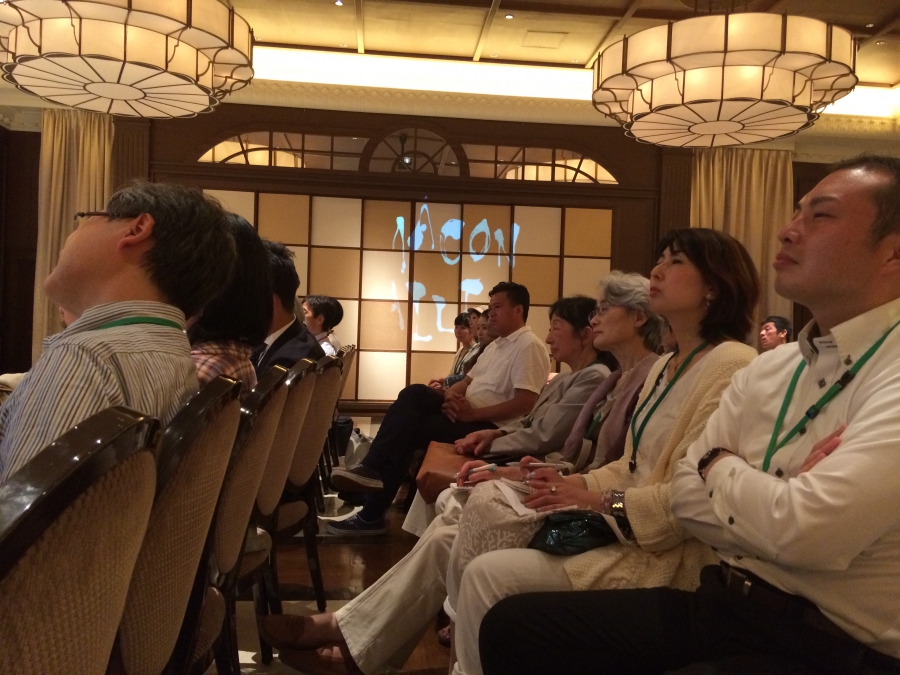 Participants listen to a presentation at Kamacon’s monthly town meeting in June.

At Kamacon’s June town meeting, about 100 people showed up. I met students, women in their 60s, local assemblymen and women, nursery school teachers and tech CEOs — men and women. The mayor wasn’t there, but he frequently comes.

Murashiki CEO Yu Sumiyoshi explains that they brainstorm ideas at the meeting and decide what "sounds cool." Then they launch a project.

When problems come up, they just brainstorm again. Anyone can suggest or take part in a project.

In June, people proposed everything from an open data venture to a movie festival. Past projects have included an app that served as a guide for local elections and tsunami preparedness events; they’ve gotten seniors and young adults together to re-stage old photos in Kamakura (for a historic sightseeing app), done a musical on the Fukushima disaster and lead an entrepreneurship project with local school kids.

Twice a year they run a hackathon in a renowned local temple, and they launched a crowdfunding startup just to raise money for local projects.

In many ways, Mod says he’s not that surprised that this is all happening in Kamakura.

“People went to Kamakura, information technologists, designers engineers, entrepreneurs, CEOs went to Kamakura because they loved Kamakura. And Mod says they wanted to do something for the town they moved to."

“I feel like Kamakura is the greatest hack of Tokyo," Mod says. "You can live in a great place for not a lot of money, you have incredible access to nature, and yet Tokyo is right there.” 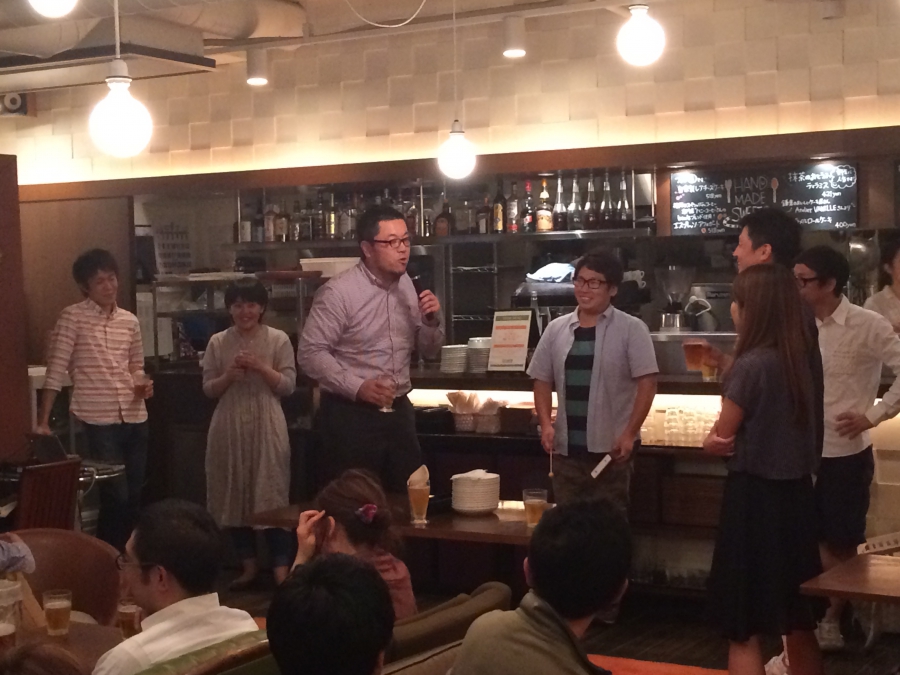 At the noisy after-party for June’s Kamacon meeting, one participant says that from Kamakura, "we can make Japan alive again. And not just Japan, but the world. There are a lot of people here who think that way," the participant says.

And increasingly, people from all over Japan are asking Kamacon to come and show them how to do it, coming to Kamakura to see it in action, and even launching a version of Kamacon in their own hometowns. Iwate, in the far north of Japan has one, and Iwaki, Fukushima, is launching in August. Preparations are underway for a Kamacon-like organization in Fukuoka, as well.

As a tech hub, Kamacon still has a lot of maturing to do. But Craig Mod says that the thing that’s exciting about Kamacon Valley is that it is "creating a real culture, and it is attracting a certain kind of innovator and a certain kind o entrepreneur," he says. "I think that we won’t see what the results of those people coming together is until ten years from now."

They’re not only putting forward a new way for how tech can function in Japan, but creating a new model for what’s often called “civic tech” that even Silicon Valley and tech communities around the world can learn from.

UPDATE: A previous version of this story spelled Kamacon incorrectly.