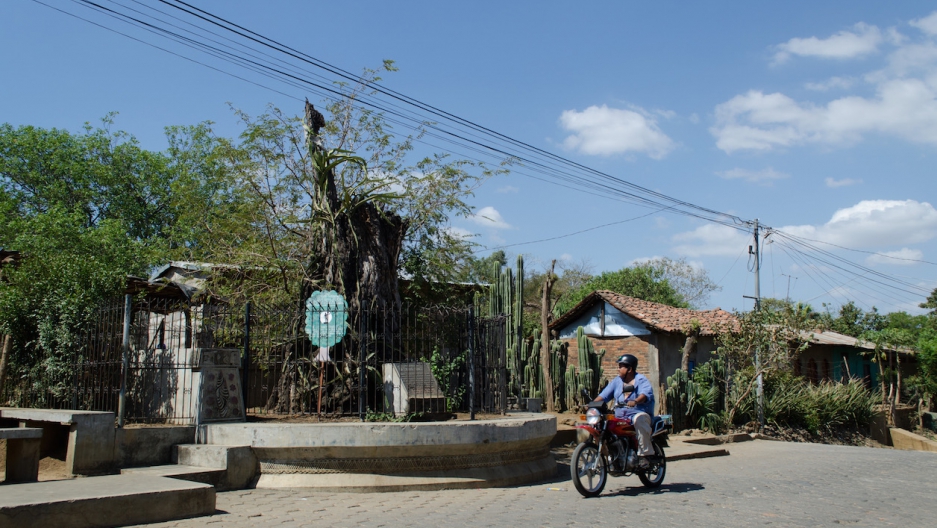 The large symbolic tree, and the people who praise it, are not doing so well.
Credit: Tom Sullivan
Share

LEON, Nicaragua — On the outskirts of an indigenous neighborhood here stands a centuries-old tree called the "Great Tamarind." The Spanish conquistadors hanged the community’s last native chief from it in 1610.

That tree means a huge deal here in Sutiaba, where many locals still claim a proud, pure indigenous heritage.

Today, however, that resilience is fading.

Community leaders like Berbis fear that Sutiaba is losing its distinct identity as it is slowly absorbed into the rest of Leon, Nicaragua's second-largest city. They’re one of Nicaragua’s seven indigenous groups. Their struggle reflects a larger anxiety surrounding the fate of the estimated 300 million indigenous people worldwide as globalization continues to threaten their cultural traditions.

Sutiaba was thriving long before the Spanish conquest. It was populated by migrants from what is now California and northern Mexico.

After Sutiaba was annexed by the city of Leon in 1902, a surge of defiant indigenous pride energized the community. Protests broke out. Residents finally won back some of the autonomy they had lost, but Sutiaba never regained its historical independence.

At first glance, Sutiaba doesn’t look much different from the rest of Leon. But on closer examination, its distinct character becomes clear. The central city is dense, busy, noisy, and graced by stately masterpieces of colonial architecture. Sutiaba, in contrast, is a tranquil residential neighborhood with spacious but simple homes. Many do not have electricity and are shared by extended families.

Life in Sutiaba unfolds largely outdoors. The slapping sound of women making corn tortillas echoes through the streets. Children play in open doorways. Some homes have signs advertising that "tiste," a traditional drink made of cornmeal and cacao that is usually sipped from a gourd, is sold inside. Murals celebrating Sutiaba’s annual Festival of Saint Jerome, which mocks the Spanish, decorate walls and the entrance to the local cultural center. Marina Maradiaga, a member of the Council of Elders in Sutiaba.

Yet local traditions are weakening. “We cannot stop development, and we aren’t against modernization, but we must deal with the changes in our community,” said Roger Montoya, president of a local council that argues Sutiaba’s cause to city authorities.

These days, Montoya spends much of his time pushing a proposed law of indigenous peoples that would strengthen the neighborhood’s social and political autonomy. One provision would require all schools in Sutiaba to offer courses in local history.

“Without education, our customs and traditions will disappear,” Montoya said. “We will lose our culture.”

The threat to Sutiaba’s identity is most evident in the near-extinction of the native language that has been spoken here since the first migrants arrived and brought the language with them. Only a handful of older people speak more than a few words. Young people show no interest in learning it, reflecting the generational gap that threatens this community’s future. Among other disappearing customs are indigenous dress, reverence for land, and masked folk dances like The Bull and The Devil.

“I worry a lot about the loss of our community,” lamented Marina Maradiaga, tiny and in a wheelchair yet feisty at 75. “The elders have maintained our identity, our traditions, our food, but the youth aren’t as interested in this. They don’t dance The Bull. They don’t wear traditional clothes. They care very little.”

Prejudices and social attitudes against indigenous communities that once separated Sutiaba from the rest of Leon are not as strong as they once were. For much of Nicaragua’s history, the word “Indian” was considered derogatory. Now, after generations of intermarriage, many Nicaraguans proudly claim indigenous heritage.

Despite these changing attitudes, however, the preservation of Sutiaba’s culture remains a low priority on a policy level. More pressing are the societal and public health issues surrounding the community, such as high rates of substance abuse and poverty.

The tree that is Sutiaba’s best-known symbol, the Great Tamarind, has also suffered through change. Much of it was destroyed in a hurricane four years ago.  All that remains is a thick and gnarled stump, with vines and cacti growing around it. The Great Tamarind is withering away.

Nicaraguans are going organic, but some farmers are very skeptical

One man's 10,000 books are about to put one tiny Nicaraguan town on the map