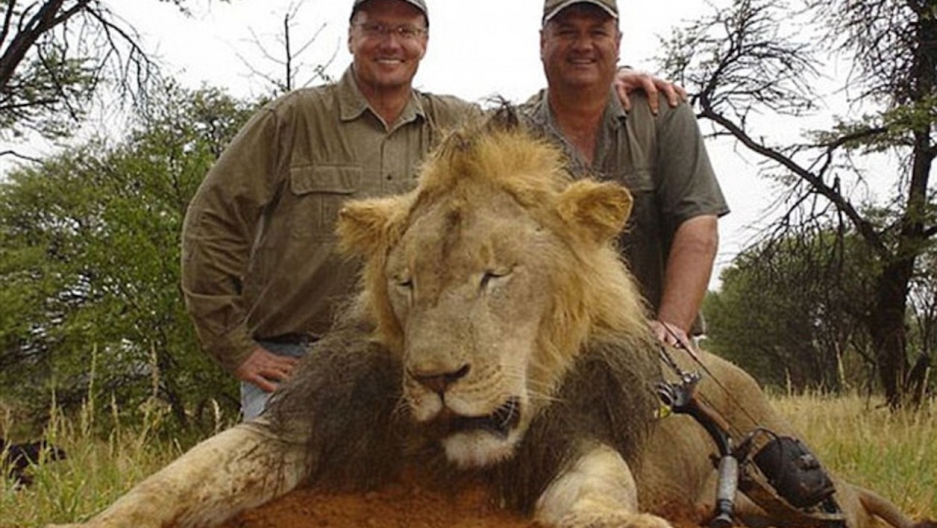 Walter Palmer has gone from hunter to hunted.

The Minnesota dentist accused of killing one of Zimbabwe’s most popular lions with a bow and arrow has become one of the most hated people on the planet.

The Google review and Facebook pages of Palmer’s dental practice, River Bluff Dental, in Bloomington have been inundated with abusive and threatening comments after the father of two was outed as the killer of the much-loved lion, nicknamed Cecil. (In an apparent response to the unrelenting abuse, the River Bluff Dental Facebook page appears to have been taken down.)

Palmer, who is very open about his love of skewering animals around the world with his crossbow (check out this hunting blog and New York Times report), has been described as a “murderer,” “scumbag,” “monster” and “piece of crap.”

And that's the tame stuff.

“You utter utter scum...... luring an animal out of a conservation park, a lion that was friendly to humans and was responsible for the safety of several cubs and female lions in the CONSERVATION PARK so that you could illegally shoot him and then leaving him wounded for hours so that you could legally 'kill him' in daylight is more than disgusting. You should be in jail and you should hang your head in shame. That animal was so friendly and loved he had a name — CECIL. YOU MURDERED HIM and you betrayed his good-natured trust in human being to do it. You are lower than pond scum,” wrote Jacqueline Esther on River Bluff Dental’s Facebook page.

Frank Ruzicka wrote on the Google review page for River Bluff Dental: "An animal who kills animals. This man took something that belonged to the people of Zimbabwe just to stroke his own ego. And in the process took life. What a disgusting excuse for a human being. What a weak person who thinks they need to kill to feel better about themselves. And they practice medicine? Purest scum. I hope your business fails miserably and you spend the rest of your life contemplating why this horrible and disgusting act lead to your own end."

Dentist #walterpalmer needs to be Extradited to #Zimbabwe & to be charged in that country! http://t.co/5PLDJmxk4r pic.twitter.com/z94kFCGGX8

Angry internet users also urged people to boycott Palmer’s business and there have been comments posted on the American Dental Association’s Facebook page calling for the dentist to be deregistered.

"I hope every patient knows that by patronizing your dental practice that they are indirectly promoting the senseless murder of animals for the 'sport' of it. Disgusting,” wrote Michael Sanchez on the River Bluff Dental Facebook page.

And this from Zack Falls: “You are a very sad person Mr. Palmer. Can't imagine how small you must feel inside to have had to commit such an atrocious act. There are other ways to make you feel better about yourself. The route you chose, as you will see, will only make you feel worse. You are a waste of life and a disgrace to Americans. And you're supposed to be one of the educated ones. Thanks a lot. BOYCOTT RIVER BLUFF DENTAL‬.”

#WalterPalmer hunted and killed #CecilTheLion... And now people from all over the world are hunting him. What goes around comes around.

The public shaming came after London’s Telegraph identified Palmer as the person who killed Cecil during a hunting trip on July 1.

Palmer was a member of a hunting party that allegedly lured the 13-year-old lion out of the Hwange National Park — where it was protected — so it could be killed legally on a neighboring property.

More from the Telegraph:

“During the hunt — which the organizers later admitted was badly carried out — Cecil was lured at night about half a mile out of the national park using bait, and then shot with a bow and arrow. The next day he was found wounded by the hunters and killed, before being beheaded and skinned.”

The Independent reported that tracking data from a GPS collar worn by Cecil, which the hunters allegedly tried to destroy, showed the lion died 40 hours after it was first speared by Palmer.

The newspaper also alleged that Palmer had paid wildlife guides $55,000 to allow him to kill the lion.

“Johnny Rodrigues, chairman for Zimbabwe Conservation Task Force, identified Mr. Palmer to The Independent and said anyone convicted of involvement in the illegal hunt could face up to 10 years in prison,” the London newspaper reported.

The Zimbabwe Professional Hunters and Guides Association said the professional hunter involved in the incident — who was identified by Zimbabwe authorities as Theo Bronchorst of Bushman Safaris — “was in violation of the ethics of ZPHGA” and has been suspended from the organization.

Bronchorst is also facing criminal charges, along with the owner of the property where Cecil was killed.

"All persons implicated in this case are due to appear in court facing poaching charges,” the Zimbabwe Parks and Wildlife Management Authority and Safari Operators Association of Zimbabwe said in a joint statement.

"Both the professional hunter and land owner had no permit or quota to justify the offtake of the lion and therefore are liable for the illegal hunt."

It’s not clear what the legal ramifications — if any — will be for Palmer, who has since left Zimbabwe. The statement made no mention of the dentist. An online petition calling for justice for Cecil has so far gathered more than 21,000 signatures.

Palmer's spokesman told the Guardian that the dentist was “obviously quite upset over everything.”

“As far as I understand, Walter believes that he might have shot that lion that has been referred to as Cecil,” the spokesman said.

“What he’ll tell you is that he had the proper legal permits and he had hired several professional guides, so he’s not denying that he may be the person who shot this lion. He is a big-game hunter; he hunts the world over.”

The dentist has now responded to the controversy, claiming in a statement released Tuesday that the hunt was "legal," and that he thought he was killing a regular lion — instead of a beloved and protected one.

That's unlikely to satisfy the legions of angry web users. But it's important to remember that while Palmer may have killed Cecil, the Zimbabwean authorities in charge of protecting the lion in the first place bear some responsibility for the animal's death.

Illegal hunting and poaching is a major problem throughout Africa. Animals listed as vulnerable and endangered, such as the lion, require strong protection to ensure they aren't slaughtered into extinction.