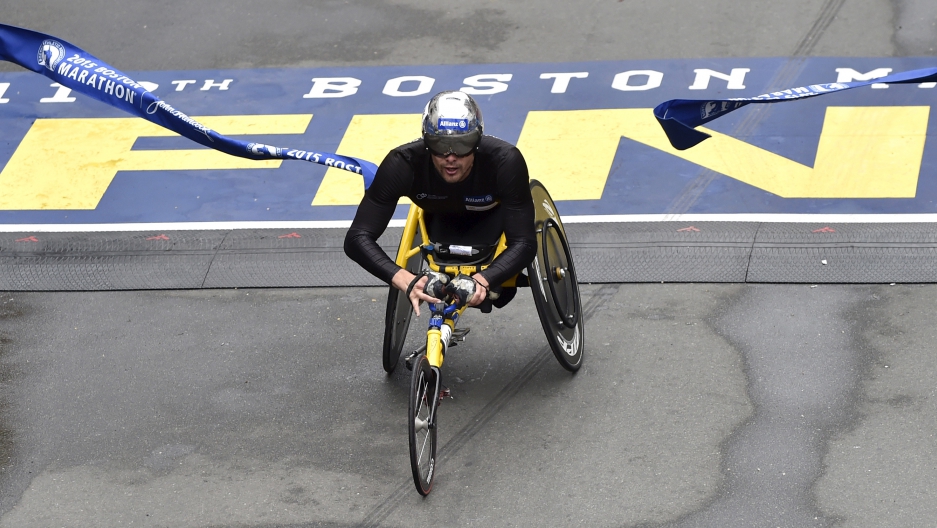 Marcel Hug of Switzerland wins the men's wheelchair division at the 119th running of the Boston Marathon in Boston, Massachusetts April 20, 2015.

This past weekend marked the 25th anniversary of the Americans with Disabilities Act — the ADA. Passed in 1990, the ADA prohibits discrimination against people with disabilities.

It was the first piece of comprehensive legislation that enshrined the right of people with disabilities to participate fully in every aspect of society.

“Today, the ADA is a model law for extending disability rights around the world, but the United States as a long way to go to be a model for inclusion,” says Takeaway Host John Hockenberry. And he would know. Hockenberry began using a wheelchair after a car accident in 1976.

Across the board, inclusion for people with disabilities is an issue that Judith E. Heumann, a special advisor for International Disability Rights for the State Department, is dedicated to.

“For me, because I had my disability when I was so young — I was 18 months old — I don’t remember not having a disability,” says Heumann. “My whole persona is around being an individual that’s got a disability.”

Heumann had polio as a child and has used a wheelchair all of her life. Hockenberry has had a different experience with disability.

“You have to rethink yourself and rediscover yourself physically,” he says. “In some ways, that process is very personal; in some ways that process can be very public. If people support you in it that’s one experience, and if people don’t support you it’s another experience. I think that diversity — not only of when people have their disabilities, but how their life proceeds after that — I think argues for an aggressive level of inclusion.”

Hockenberry says when he was in college at the University of Chicago during the 1970s, only one building was accessible and all of his classes had to be held there.

“It was a problem, but we did what we could,” he says. “But now that campus is accessible from one end to the other. Viewing that accessibility, I find it very emotionally satisfying.”

Heumann, who went to Long Island University in the 1960s, says that she faced similar challenges.

“There were two steps into the dormitory and there was a step into the bathroom,” she says. “The dorm has since been made accessible after I graduated, and after another law, Section 504, came into place. What was very interesting at that time was there was a student newspaper on the campus. The students had done an interview of disabled students on campus about problems of accessibility.”

She continues: “At that time, the head of the psychology department said that students who had physical disabilities should not go to Long Island University because it was traumatic for us to go to the school, as opposed to saying that the university needed to make itself accessible.”

Nowadays, thanks to the Americans with Disabilities Act, colleges and universities don’t have a choice when it comes to accessibility, something that Heumann says allows students to focus on academics and campus life participation.

But even though strides have been made in the last 25 years, people with disabilities still have a difficult time job obtaining employment and reaching economic independence.

That's something Heumann experienced. After college, she aspired to teach in the public school system, but was initially denied a teaching certificate because she was in a wheelchair. She sued and re-entered the classroom as a teacher.

“Employment is still the major area where more achievements need to be occurring,” she says. “It’s a combination of what the private sector is doing to recruit disabled individuals. It’s also very important to be looking at, for those individuals that had their disabilities before the age of 21, the kind of work experiences that they’re getting. Are they participating in internships and mentorships, or are they able to come to an interview with the kinds of qualifications that companies are now looking for people to have? I would say yes, things are improving, but a lot more needs to be done.”

While she believes the ADA has done a great deal for people with disabilities, Huemann also says that too many people still do not understand that having a disability is just one part of a person’s life.

“We can make the same kinds of contributions as other individuals,” she says. “Sometimes we need accommodations, but the data also shows us that the level of accommodations that disabled people need are really very small.”

This story first aired as an interivew on PRI's The Takeaway, a public radio program that invites you to be part of the American conversation.