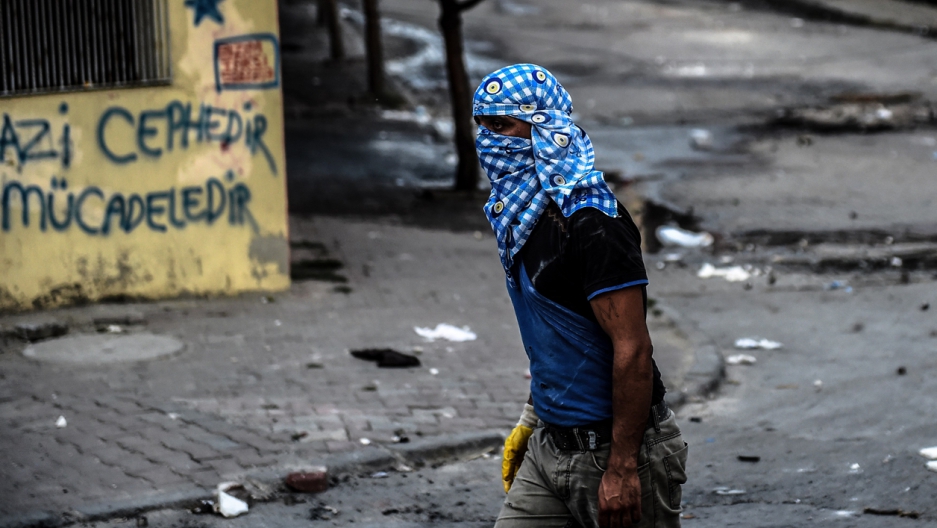 A left-wing protester walks in the streets during clashes with Turkish riot police in the district of Gazi in Istanbul, on July 26, 2015. Turkey has launched a two-pronged 'anti-terror' cross-border offensive against Islamic State militants and Kurdistan Workers Party (PKK) fighters after a wave of violence in the country, pounding their positions with air strikes and artillery.
Credit: Ozan Kose
Share

Turkey's new cross-border "anti-terror" campaign proves that the enemy of your enemy can still be your enemy. And enemies get bombed.

Ankara took its sweet time deciding whether to join the military campaign against the Islamic State, but it took just one day to expand its intervention in Syria and Iraq to include strikes against the Kurdistan Workers’ Party (PKK) — Kurdish fighters from Turkey who are battling the Islamic State alongside Kurds from Syria and Iraq — and who've been fighting for autonomy from the Turkish state for decades.

On July 24, Turkish F-16 jets launched their first round of airstrikes against Islamic State targets in Syria. The next day, they struck at PKK "logistics points" in northern Iraq, staging areas for the PKK's fight against the Islamic State.

The whole thing is very complicated, as GlobalPost's Peter Gelling has explained. And it leaves the United States in an awkward position — the latest of many awkward positions the US has found itself in with respect to the varied interests of its anti-IS coalition. (See Bashar al-Assad and the ongoing US struggle to train moderate Syrian rebels.)

Kurdish fighters are among the most effective allies the US has on the ground in Syria and Iraq. Kurdish fighters from Iraq (the peshmerga), Syria (the People's Defense Units, or YPG), and Turkey (PKK) coordinate on the ground. The US coordinates with the Iraqi peshmerga and the YPG, but insists its coordination doesn't extend to the partner with which its own coordinating partners coordinate. That's because the State Department still lists the PKK as a "Foreign Terrorist Organization." (Some observers have called it an "out of date" designation, and the PKK's role in the IS fight has renewed calls that the group be de-listed — but that was before a recent escalation in violence between the PKK and Turkish security forces.)

The FTO-designated PKK has remained, as GlobalPost Senior Correspondent Richard Hall puts it, a "silent partner" in the US-led war against the Islamic State.

But just hours after US officials announced a game-changing deal with Turkey that will allow US jets to launch airstrikes against IS from Turkish bases, those same officials were forced to reckon with the fact that their new public partner was killing their silent partner.

It's one thing for the US to deny coordinating with the PKK while turning a blind eye to anti-IS Kurdish coordination on the ground. It's another thing to support Turkish airstrikes against PKK positions in Iraq.

The official US line on the PKK hasn't changed, though.

During an at-times tense press briefing on Monday, State Department Spokesperson John Kirby claimed that the US government recognized "Turkey's right to defend itself against terrorists."

Although Turkey had called the two-pronged attacks part of a single "anti-terror" campaign, Kirby said the anti-PKK strikes were "separate and distinct from the fight against ISIL.”

When pressed on how that could possibly be the case, he insisted, “These are two separate things.”

It will be very hard to keep those things separate if Turkey can't manage to keep PKK targets separate from other Kurdish factions. The YPG said on Monday that Turkish tanks fired shells overnight on their positions in the Syrian border village of Zur Maghar, injuring four fighters.

“Instead of targeting Isis terrorist occupied positions, Turkish forces attack our defenders’ positions,” the YPG said in a statement. “We urge [the] Turkish leadership to halt this aggression and to follow international guidelines. We are telling the Turkish army to stop shooting at our fighters and their positions.”

Turkey denied the accusation and said the YPG was not a target of the military campaign.