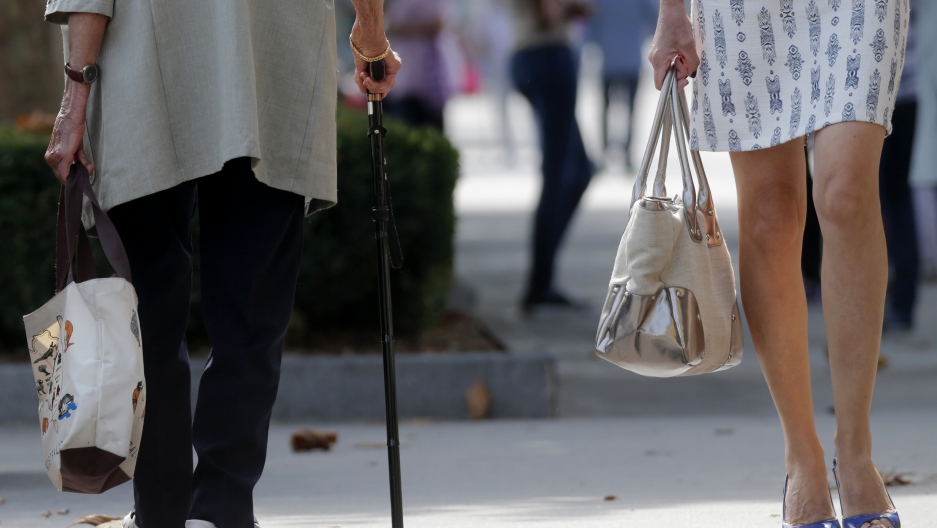 A retired woman uses a cane as she takes a walk in Enghien-les-Bains, north of Paris, August 26, 2013.

A new drug might provide some hope for those showing very early symptoms of the disease. This monthy, at the annual Alzheimer’s Association International Conference in Washington, the pharmaceutical company Eli Lilly released new data on a drug that seems to prevent the buildup of amyloid plaques in the brain — the type of plaques many doctors believe are tied to Alzheimer's.

Scientists say it's much too early to tell if the drug will make it to the market, but for those who care for Alzheimer's patients, the potential treatment offers at least a glimmer of hope for a disease with very few prospective cures on the horizon.

Dr. David Kramer was diagnosed with Alzheimer's in 2012 at the age of 56. He retired from his job as an emergency room physician and currently lives with his wife and caregiver in Florida. He says he’s cautiously optimistic about the new data from Eli Lilly.

Do we all have Alzheimer's completely wrong? This man says yes

Why do so many more women have Alzheimer's than men?

“I have some preliminary optimism with the results, but I had an opportunity to read the paper on the study that was discussed and presented,” says Kramer. “The data is very, very preliminary, and there’s not any clear evidence from what I can see that this will have any long-term effect. But it’s way too soon to tell.”

Like Kramer, Meryl Comer is also watching with some hope. She has been an Alzheimer's caregiver for 20 years — her husband, a former research physician at the National Institutes of Health, was diagnosed with early-onset Alzheimer's at the age of 57.

Comer, who is also a journalist and author of the New York Times bestseller, “Slow Dancing with a Stranger: Lost and Found in the Age of Alzheimer's,” cares for her husband — and for her mother, who also has Alzheimer’s disease.

“It’s promising, but premature, and people tend to read the headlines only — we’ll receive calls saying, ‘Good news, your problems are over,'” she says. “They don’t understand the complexities of the disease. It’s easier to get to Mars than it is to find a disease-modifying therapy for a very complex issue like Alzheimer’s.”

Comer applauds pharmaceutical companies that are working to find treatments and cures for the disease, despite the many false starts and failed attempts that have already been made.

“We went through a phase where, after these failed trials, we were afraid that we would be abandoned at a time when the numbers are growing exponentially — 44 million globally are suffering from the disease,” she says. “The other new hopeful part is there are 13 new therapeutic compounds, and four or five are disease modifying therapies. I stay close to the science, as do all advocates, because we are desperate for a disease-modifying therapy. Just give us five more years of quality of life — think what that might mean to an individual.”

Despite the excitement around the findings presented by Eli Lilly, the hope of a treatment for an Alzheimer’s is just that — a hope.

“While these may have potential, even after the phase three trials are done, you still do not know if the effects will be long lasting — whether the slowdown in the progression of the disease, if it actually does occur, will be consistent over time,” Kramer says. “There’s a lot to learn.”

Even with all the uncertainty, Kramer says he doesn't feel powerless in the face of his diagnosis.

“I feel that it’s important for me to enjoy the time that I have now,” he says. “My wife and I focus on doing everything that we can now and enjoying life. There is a definite benefit in having an early diagnosis, as I was fortunate to have. I can then say, ‘All right, I know what I’ve got, but I’m doing well now.’ As long as I can continue to do well and live well with the disease, I plan on doing that.”

But not all are so lucky. Comer says that many doctors are reluctant to give an early diagnosis of Alzheimer’s because there is no cure. She says her husband was misdiagnosed for four years, with doctors saying that her husband’s condition might have been Lyme’s disease or depression.

“It’s insulting to families who are lost and confounded by behaviors, because behaviors are the first things that appear around the disease,” she says. “We have to [call for] an early diagnosis — give us a chance to live in the moment with our loved ones, don’t decide for us.”

An early diagnosis, Comer argues, helps families and those suffering with the disease to live fully, especially since the disease can progress at different speeds.

“Often you’re moving from crisis to crisis,” she says. “You really try to look at the successes — that he had a good day. The caregiver actually forgets who they are because you are so focused on protecting the dignity of the loved one who has the disease and of giving them their last ‘hurrah.’ That takes tremendous energy.”

Comer adds that this is the “biggest women’s issue since breast cancer” since women often outlive men, and the majority of caregivers are women, who are also much more likely to give up their careers for a loved one in need.

“I interact a lot with many, many people with dementia, and I tell you that the primary concern that all of us have is about the health and welfare of our caregivers,” Kramer adds. “I’m much more concerned about the impact of this disease on my wife than I am on myself.”