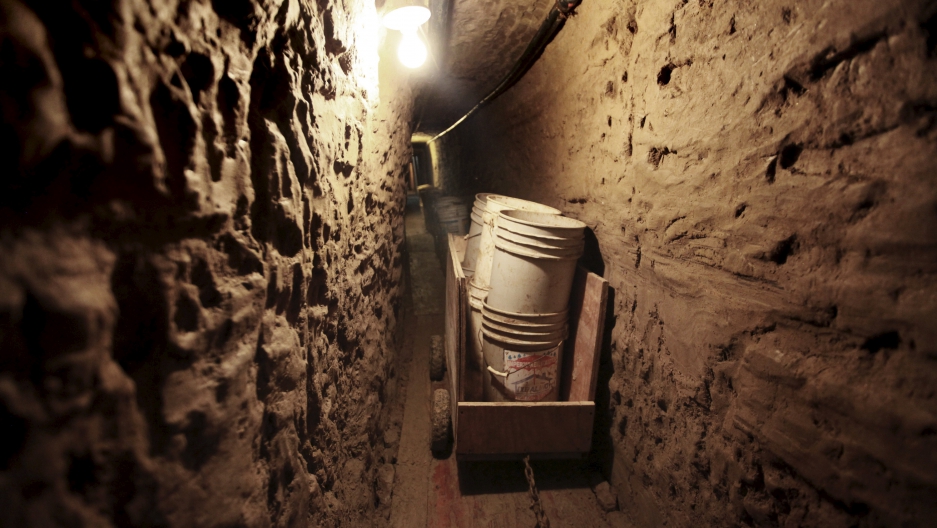 A makeshift cart with containers is seen at a suspected drug tunnel under construction during a media tour by Mexican Army in Tijuana April 7, 2015.

Well- known drug trafficker, Joaquín Guzmán Loera, also known as El Chapo, escaped from prison this month via a tunnel. It should have been no surprise, because his cartel specialized in using “supertunnels” to bring drugs and other illicit cargo past the US-Mexican border.

But "supertunnels" are anything but ordinary.

“Supertunnels require a lot of engineering. They’re usually between 30 and 70 feet below ground. Most of them have electrical lighting, they have ventilation and they also have rails that are laid across the floor, where usually electric rail carts can be pushed through,” says Monte Reel, author of Underworld. How the Sinaloa drug cartel digs its tunnels, for the New Yorker.

That experience was crucial to his escape.

El Chapo and his Sinaloa cartel are proficient at digging tunnels. Chapo’s henchmen stride along Mexican cities to find recruits to build the tunnels. People looking for jobs, often poor, are offered jobs and forced to work in the tunnels.

Reel tells the story of a man called Fernando who was recruited by the cartel while he was applying for a job in a pizzeria in Tijuana.

“While [Fernando] was filling out the job application, a man approached him and said, ‘if you’re looking for work, I have a job for you, cleaning a convenient store.’ And a couple weeks passed and he called the number that the man had left with him and arranged to go see the convenience store. But when he got there, he was, basically taken into the warehouse, the door locked behind him and he couldn’t leave for two months,” Reel says.

According to Reel, it is hard to tap into the illegal tunnel-making network. It's even harder to find who leads the construction efforts. The only people arrested are usually the workers who have nothing to do with the cartels.