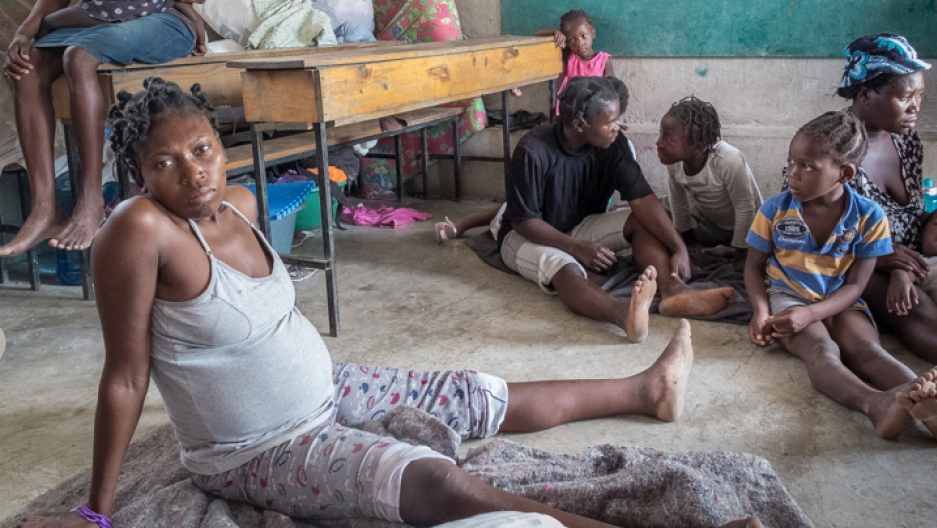 Women and children sit in a classroom at a school in Fond Parisen, Haiti. About 50 people of Haitian descent are staying at the school after being forced out of the Dominican Republic.

André Joseph was born in Haiti, but he’s spent almost his entire life in the Dominican Republic. He’s undocumented.

About a month ago, he returned to Haiti for the first time in more than four decades — and not by choice. Joseph says about 48 hours before the government deadline to apply for legal residency, a group of Dominican men came to his house with guns, hammers and sticks.

"The men were going to kill me," Joseph says. "I was with my wife and son, and we ran. We left our house and all our possessions. Our lives are more important than the things we own."

The family hid in a field all night and went to the police station in the morning. But Joseph says the police didn't want to hear about the anti-immigrant mob threatening them.

The police locked the family up, then put them in a truck and took them to the border along with about 25 other people.

In 2013, the Dominican Supreme Court upheld a ruling that stripped the citizenship of people of Haitian descent living in the country, leaving about half a million people stateless. People who wanted to apply for legal residency or citizenship had to do so by mid-June or face deportation. Human rights groups have said mass deportations could begin in August. But already about 40,000 Haitians have left the Dominican Republic.

About 50 Haitians are staying in the school in the tiny Haitian town of Fond Parisien, a few miles from the Dominican border. Bedding is piled up along the walls and on top of desks. Some young women are braiding each other's hair, while others are cooking beans over a fire outdoors.

Natacha Dona with her youngest son, Kevens. Her four kids are Dominican born and she's lived in the Dominican Republic almost her entire life.

Sitting outside the school, Natacha Dona says her parents brought her to the Dominican Republic when she was 8. That was 33 years ago.

She's here at the school with her four sons — all Dominican-born. Dona is five months pregnant and she's been sick for a while. When police came to her house a couple of weeks ago, she thought they might help her get to the hospital. Instead, they forced her onto a bus.

"They didn't even give me time to grab clothes or my kids' papers," she says. "Nothing. I ended up here and I don't know anyone."

Dona says she thinks she has some relatives in the north of Haiti, but she doesn't know how to find them. The father of her kids is Dominican, and even though the couple is separated, he was still helping provide for them. Dona doesn’t know how she’ll take care of them here in Haiti. She’s also worried about her health.

"I have a thing here," she says, lifting her arm to show me an egg-sized lump in her armpit. A volunteer took her to a hospital in Port au Prince, but she still doesn't know what's wrong. She asks if I can bring some baby clothes the next time I come.

The border checkpoint a few miles from the school has the inauspicious name “Malpasse” — bad crossing. I didn't see any Haitians being deported there, just lots of bored-looking street vendors and motorcycle taxi drivers on the Dominican side, waiting around for a customer.

One Dominican driver named Luis Rigoberto Piña Volquez tells me his country is getting a bad rap in the international press. He wants me to convey a message to New York City Mayor Bill de Blasio, who in June described the threatened deportations as “illegal,” “immoral” and “racist.”

De Blasio “is saying the Dominican Republic is mistreating the immigrants," Piña says. "Then why doesn't the mayor of New York ask for us to send 10,000 of them over there, to the US?"

The Haitian government pledged to build a welcome center for deportees not far from the border. But I went to the site, and there was nothing there — just a big empty lot with a sign reading "Welcome Center for Repatriated People." One aid worker told me people who leave the school get about $20 from the government, but not much else.

Sensoirre Subelensa sits with his children in one of four classrooms at a school in Fond Parisien, Haiti. Subelensa arrived in the Dominican Republic at age 7 and lived there for 28 years. He says he was grabbed by police in June and forced out of the country.

Back at the school, André Joseph says one of the worst things about being stuck there is having nothing to do. He used to wake up at dawn and work in the fields until dark. Now he just sits around and waits. He says the Dominicans have profited from years of Haitian labor and now they're casting them aside.

"We Haitians are really the Dominican's slaves," he says. "We've made them rich."

Asked whether he considers himself Haitian or Dominican, Joseph says recent events have left little doubt.

"I'm Haitian," he says. "If I was Dominican, they wouldn't have expelled me like some dog."