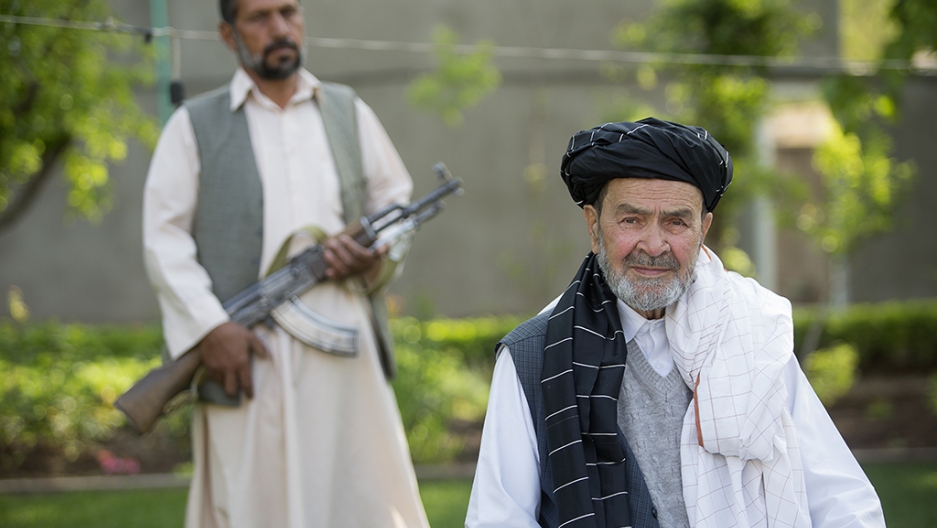 Mohammad Khan, a businessman who was kidnapped in April, at his house in Herat city.
Credit: Kennet Islandi Havgaard
Share

HERAT, Afghanistan — Mohammad Khan had driven the road to his gardens on the outskirts of Herat for years, several times a week, without incident. Though known as one of the wealthiest men in the city, Khan was never afraid something might happen to him.

Khan was affluent from an early career as a pistachio tycoon, and a later one exporting clothes and building materials to Iran and leasing out shops in the bazaar. He felt confident that he had the protection of the local community, granted by his old age and generous charity donations.

But on one afternoon in April, as Khan exited the gardens and took the dirt path back to the main road, eight men on motorcycles were waiting for him.

After blindfolding him and his driver at gunpoint, they took control of his car, steering it down unpaved roads away from Herat. At 75, Khan had undergone four heart surgeries, and the breakneck speed over bumpy ground shot jolts of pain through his body.

After what seemed like an hour, the car reached a village where Khan found himself in a grimy room with no light, unable to tell the time of day.

Khan’s kidnappers were not members of the Taliban or any other armed opposition group. Their motives were not ideological. And Khan is not the only victim.

“Just in the last week we had five or six kidnappings in Herat city,” says Mohammad Rafiq Shahir, a local parliamentarian. He begins rattling off incidents: shopkeepers, children of wealthy entrepreneurs, and the son of a money exchanger, who was kidnapped the week before and released for a $23,000 ransom.

Kidnappings are a growing problem in Herat. Kidnappers demanded a $200,000 ransom for Mohammad Khan who now carries a gun and travels with hired muscle when he visits his gardens on the outskirts of Herat.

The pattern is at odds with its general reputation as one of Afghanistan’s few safe havens. Afghanistan’s third-largest city, Herat is largely untouched by the insurgency that has ravaged the country since the ousting of the Taliban in 2001.

It is often upheld as a model city, an example of what a prosperous, peaceful Afghanistan might look like. It is normal here to see women walking tree-lined streets, and on weekends, families flock to the UNESCO-restored, millennia-old citadel hoisted above the city center.

Located in the west of the country, Herat benefits from trade with neighboring Iran and Tajikistan. A relatively flourishing marble industry has for years helped drive an annual growth of 20 percent, and the emergence of a burgeoning middle class.

But economic progress has unleashed a surge in kidnappings, targeting businessmen, industrialists and politicians.

As the national police are increasingly occupied by non-civilian duties, such as fighting a renascent insurgency, city crime is on the rise. And it is taking a toll on the economy.

Khatibi says investments in the city have dropped by 80 percent over the past five years, mainly due to crime.

“Many businessmen have left Herat because of security issues and gone to other countries,” he says. “50 percent of them have left because of kidnappings.”

The recently appointed provincial police chief, Abdul Majid Rozi, claims he has made serious strides against criminal gangs, including the arrests of members of six criminal networks.

“During my time as police chief, the number of kidnappings has decreased by 90 percent,” he says. When he took over five months ago, Herat saw an average of 10 kidnappings per week. The past three months, there has only been one, he says.

Saher Khatibi, head of Herat’s Chamber of Commerce, admits the number of kidnappings has decreased slightly, but adds to the list: Bashiri, a businessman, paid $100,000 to have his son released a few days ago. On July 8, the 28th day of Ramadan, another businessman, Qawshi, was forced to pay $50,000 for his son’s freedom.

Business is also threatened by insecurity outside the city, where the highways linking Herat to the east and the south of the country are so unsafe many truck drivers avoid them.

“These roads are not safe,” says Nahed Farid, a parliamentarian from Herat. “They cannot transport their goods from Herat to Kandahar and then to Kabul. That’s why Herat has more trade relationship with Iran than with Kabul,” she says. Businessman Mohammad Khan during a visit to his garden outside Herat in Western Afghanistan.

In December last year, president Ashraf Ghani, then newly elected, sacked dozens of officials in Herat Province for failing to maintain security, including 15 police officials. Perhaps due to Ghani’s reputation for snap firings, the police are now eager to show they're getting the situation under control.

One example of this is the videoed reenactment of the claimed liberation of Mohammad Khan, in which police officers guided a local TV camera crew through narrow mud shafts to show the dungeon where the aging businessman sat chained for 72 hours.

Khan himself is vague about the details of his release, saying only: “The police and my son found me.” He says the kidnappers asked for a $200,000 ransom, but denies paying it.

Crime in Herat is rooted in economic slump and growing unemployment, and rarely seems to be organized on a large scale.

“The criminal groups are small,” Khatibi says. “They are not part of large mafia networks.”

That was also the case of Khan’s kidnappers, who turned out to be sons of one of his acquaintances who had passed away.

Khan himself is visibly shaken by the incident. Though he still visits his gardens on the edge of town, he now travels with hired muscle.

“I also carry a gun,” he says with a dry laugh, pulling a small handgun out of his inner pocket. It provides a small measure of security he didn’t think he needed, and is a sign of the perils plaguing a city that could otherwise be an engine of growth in Afghanistan’s move toward peace.