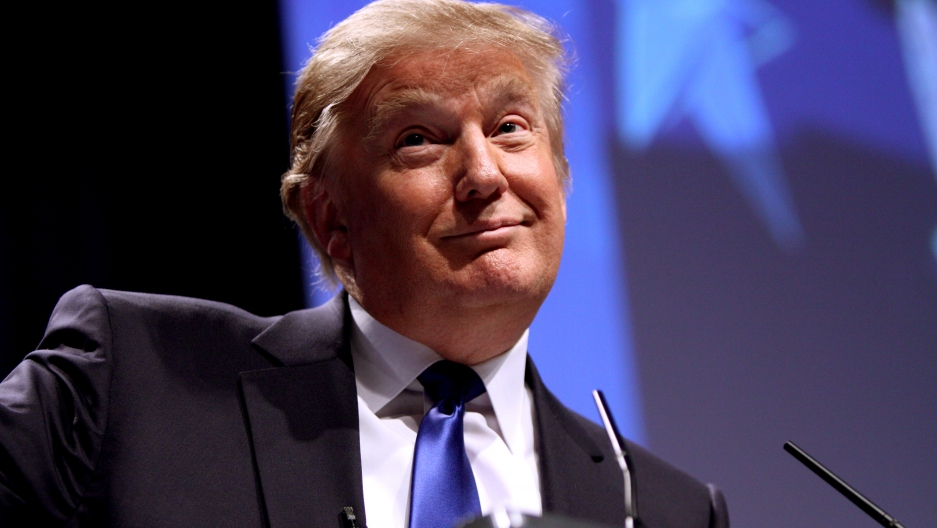 In a week that saw him question John McCain's heroism and publicly give out the cell phone number of South Carolina Senator Lindsey Graham, many have concluded it's near the beginning of the end of Donald Trump's presidential quest. But poll after poll continues to place him ahead of his GOP contenders, guaranteeing that we're far from seeing the last of Trump on the presidential stage anytime soon — especially not before the first Republican debate set to take place in two weeks.

When I stopped by Trump’s New Hampshire headquarters in Manchester this week, the volunteers there were doing damage control. Their mission: Find veterans willing to make a public show of support for their candidate, who recently said of McCain, the 2008 Republican nominee: "He was a war hero because he was captured. I like people who weren't captured."

George Schuschereba of Derry was one of three people working the phones and making the pro-Trump pitch, which he did with gusto.

"Well, I think the big thing with Donald is that he's just too honest," Schuschereba told one vet. "That's what I think it is. If you're telling the truth, sometimes the truth hurts, and people don't like to hear it."

Other assessments of Trump's comments were less generous. His GOP rivals piled on. The Des Moines Register said he should end his candidacy, calling it a "bloviating sideshow." And the Concord Monitor dismissed Trump as a “novelty candidate.”

But Schuschereba, who calls himself a "very, very big Trump supporter," was unfazed.

"I believe all politicians — and Trump is not a politician — have a way of twisting the truth," he said. "They have a way of not really telling things the way they are."

"[Trump] may sometimes say things that are hurtful to people," he added. "But I would rather have that put out there as the truth, as opposed to someone else."

But other Trump supporters seem concerned that developments like that dustup with McCain — who'd previously said Trump "fired up the crazies" during a visit to McCain's home state of Arizona — will do lasting damage.

"I really think he needs to get a filter," said realtor Karl Zahn.

Just a few months ago, Zahn was a Trump skeptic. He dismissed him as an arrogant, egotistical New Yorker. But then he saw him in person in Nashua — and he was smitten.

"For one thing, he was affable," Zahn recalled. "He was funny, which I never expected. He was even self-deprecating, which I really didn’t expect. And then, on top of that, everything he said made sense to me, how we just get the short end of the stick, in our dealings with Mexico, China, Japan, all across the world."

Problem is, Zahn volunteered for McCain during his 2008 presidential run, and still holds him in high esteem. He says Trump's anti-McCain barbs made him seriously reconsider his support. After agonizing for days, though, Zahn he decided to give Trump the benefit of the doubt.

"I know in my heart that Donald Trump, the man, the father, the husband, does not believe in his heart that John McCain is anything less than a true American hero," he said.

And how does he know that, exactly?

That's certainly one possibility. And some Trump supporters have another explanation for those McCain remarks and the furor they sparked.

"I think the comments were taken out of context," said Lou Gargiulo, a small businessman and veteran.

In the 2008 cycle, Gargiulo backed Mitt Romney, whose cautious campaign style helped him land the Republican nomination. Now, he's the co-chair of Trump’s campaign in Rockingham County, and he seems to feel liberated.

"People are tired of same-old, same-old, the political games that exist in Washington, in the state capitals, and are looking for someone who says it like it is," he said. "And Donald Trump certainly does it.

For what it’s worth, Gargiulo also believes that Trump’s appeal is broader than many observers think.

"I have to tell you, it goes across the spectrum," he said. "Supporters of Mr. Trump go from very conservative Tea Party people to mainstream Republicans to — all! I’ve seen, in fact a number of Democrats who are beginning to take notice."

And whether you love Trump or hate him, it’s almost impossible not to pay attention.