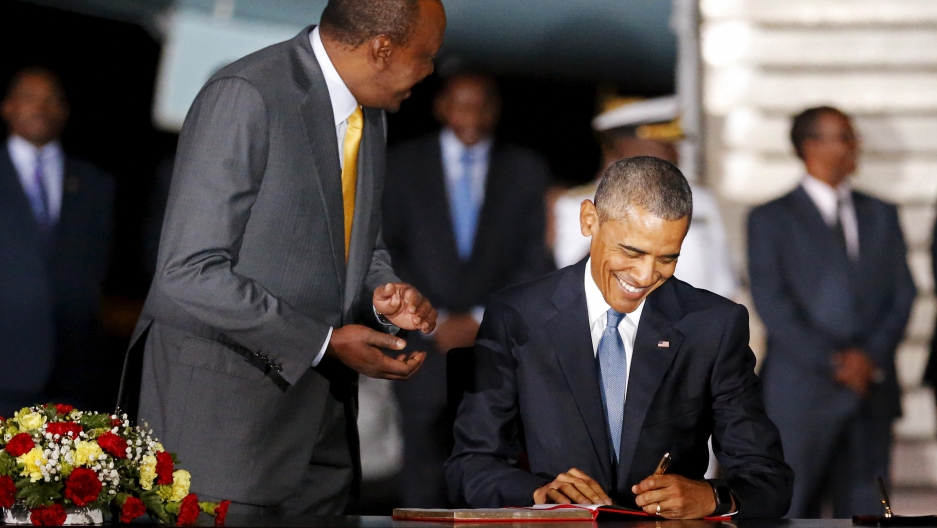 Kenya's President Uhuru Kenyatta, left, looks on as US President Barack Obama signs a guest book as he arrives aboard Air Force One at Jomo Kenyatta International Airport in Nairobi July 24, 2015.

It's been a long time coming — six and a half years to be precise.

On Friday, President Barack Obama arrived for his first presidential visit to Kenya. Kenya considers Obama one of its own, as Obama's father was Kenyan.

But not all Kenyans are thrilled to see him.

The president has been an outspoken critic of Kenya's persecution of gay people. He spoke about the issue with the BBC ahead of his visit.

During Obama’s presidency, the US has become more supportive of gay rights, including same-sex marriage, while Africa has moved the opposite direction.

Kenya’s Deputy President William Ruto has been outspoken on the issue, stating that Kenya was a God-fearing country and would not entertain growing calls for respect for gay rights.

The punishment for homosexuality in Kenya is a 14-year prison sentence.

“I went to this barber shop in Nairobi,” says Gitari. “I wanted to get my hair cut. But the barber there told me that I could not receive service because some of the patrons in the barber shop had seen me on television advocating for gay rights and there were concerns about associating with a known homosexual. I have been denied entry to social premises, like restaurants and bars. And the usual rhetoric I hear is that people like you are not allowed here.”

Gitari is hopeful that President Obama will speak publicly in support of gay rights while he is visiting Kenya.