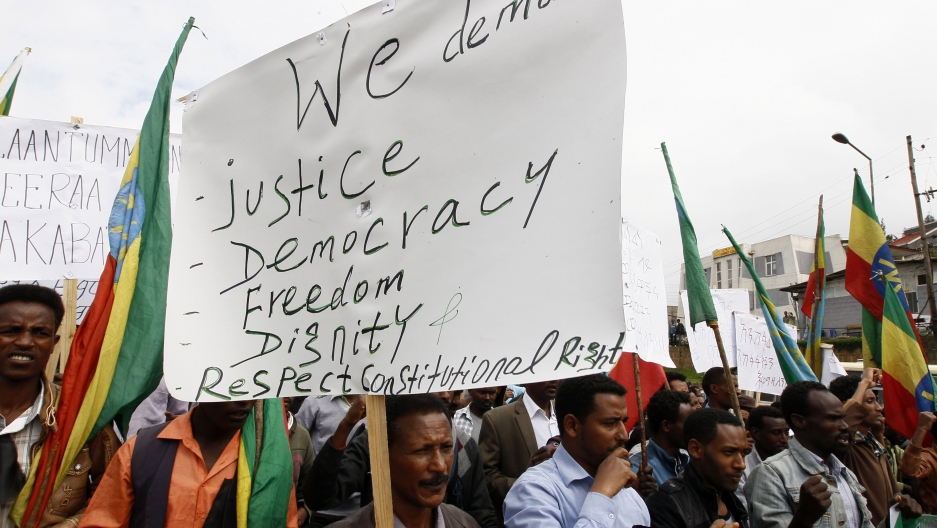 Why is President Barack Obama even going to Ethiopia?

Human rights advocates and many regional specialists are asking that very question of Obama, who travels to the capital Addis Ababa on Sunday to address the African Union.

”Let's be clear, Ethiopia is not a model of democracy that should be rewarded with a presidential visit,” says Jeffrey Smith, an Africa specialist at the Robert F. Kennedy Center for Justice and Human Rights. He co-wrote an article in Foreign Policy entitled “Obama Should Stay Away From Ethiopia.”

Smith does concede that the two nations' longstanding many shared interests, "including promoting and maintaining regional stability, facilitating peace in a very troublesome context in South Sudan, countering al-Shabab in Somalia and Kenya as well which is a real and ongoing threat and, let's face it, and advancing Ethiopia’s own growth and development, which has been rather modest and at times impressive over the past decade.”

Once you start to peel back the layers of Ethiopia, Smith says, Ethiopia looks a little sinister. The country has become a model for political repression in sub-Saharan Africa with a range of repressive laws, he says, laws that have stifled the political opposition and decimated civil society. The US State Department backs up that point in its annual human rights report. Smith paraphrases the section on Ethiopia that cites widespread “restrictions on freedom of expression,” “politically motivated trials,” “harassment and intimidation of opposition members and journalists,” “alleged arbitrary killings … torture,” limits on citizens’ ability to change their government, and restrictions on freedom of assembly, association, and movement.

Next week, in addition to addressing the African Union leaders, Obama is expected to participate in a civil society roundtable meeting that will include human rights activists from Ethiopia discussing the lack of political rights and civil liberties. But Smith says it will take more than talk to change things in Ethiopia. “There needs to be legal reforms, greater transparency, and anticorruption measures,” says Smith. “It's simply not enough to speak, even if forcefully or compellingly, about the need to protect human rights. There needs to be concrete action, and that is clearly not happening.”

“In the long term, the US government should redouble its commitment to Ethiopia’s beleaguered civil society,” Smith concludes in his Foreign Policy commentary. “Obama’s 2016 budget request includes more than $400 million in assistance to the country, of which less than 1 percent is allocated for democracy and human rights programming — an actual improvement from last year, when zero was devoted to this vital sector, much of the spending going toward health and humanitarian aid."

Smith says "a robust, reenergized, and empowered Ethiopian civil society, in which human rights groups are free to operate, is central to deepening democratic principles, not only in Ethiopia but also throughout the East and Horn of Africa. Overall, Obama must firmly reiterate that stability and security, and respect for basic human rights, and the legitimacy of civil society are not mutually exclusive objectives in Ethiopia or elsewhere. Rather, he should be unequivocal — in both rhetoric and in practice — that, together, these issues help form an unshakable and long-term pillar for US engagement on the African continent.”