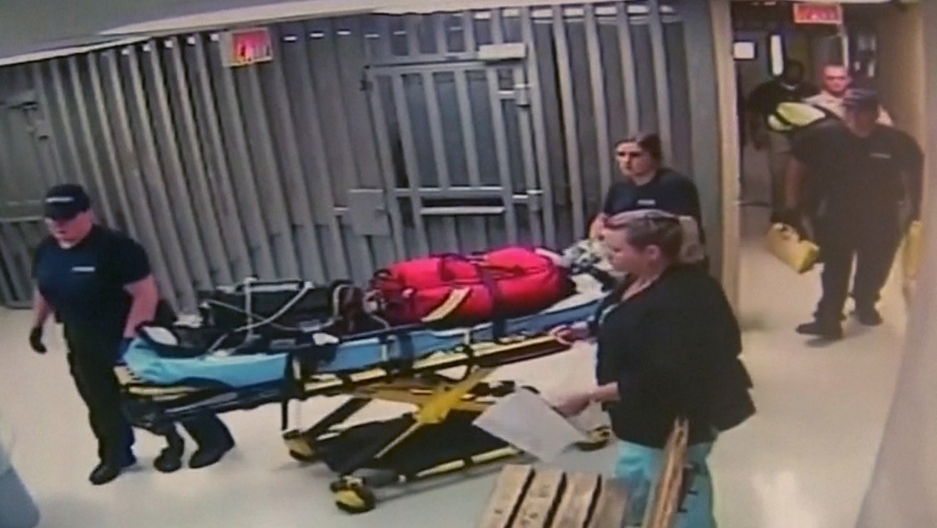 Medics leave with equipment on a stretcher at Waller County Jail in Hempstead, Texas, July 13, 2015 in this still image taken from video provided by the Waller County Sheriff's Office.

The Texas Commission on Jail Standards inspects all jails in the state at least once a year, and they also investigate the death of inmates. Inspectors returned to Waller County in July to report on the death of Sandra Bland, a Chicago native who was arrested after a traffic stop and was found hanged after her third day in jail.

“We did issue a notice of non-compliance based upon a records review of the Waller County Jail,” says Brandon Wood, the executive director of Texas Commission on Jail Standards.

There were two areas where the facility was in violation. First, not all staff had undergone an annual two-hour suicide prevention training. And second, the commission's report notes, "Waller County is not completing visual face-to-face observation of all inmates at least once every 60 minutes, as required by Minimum Jail Standards."

Sandra Bland's body was found at 9 a.m. on July 13, and a video released by the sheriff’s office shows that there was no activity in the hallway leading to her cell for about 90 minutes before then.

An initial autopsy concluded that Bland had committed suicide, but the FBI is investigating the death as a homicide.

Bland's family and friends are skeptical that she would commit suicide. While the details of her death remain unclear, suicide continues to be a problem in the American prison system—40 in every 100,000 prisoners take their lives each year, and more of a third do so in their first several days in incarceration.

This story was based on an interview with PRI's The Takeaway, a public radio program that invites you to be part of the American conversation.