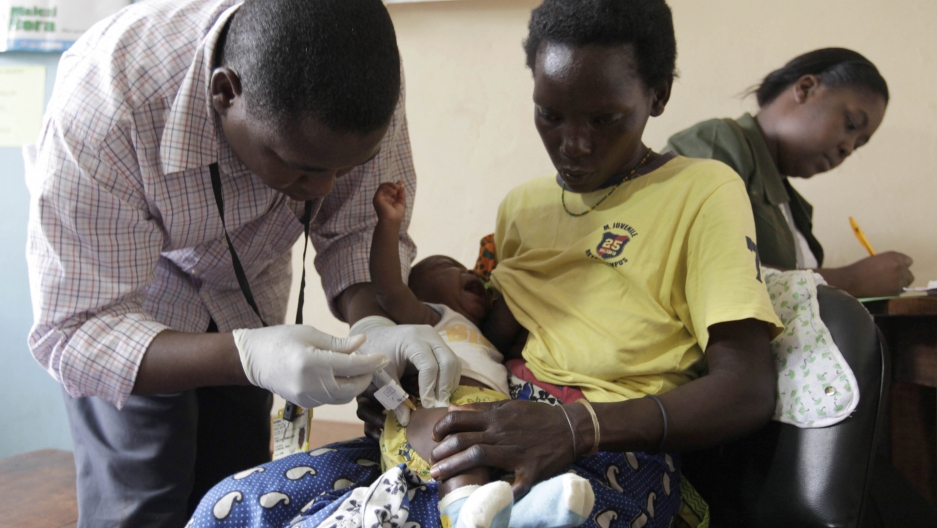 Lois Dama (2nd R) holds her baby daughter Rehema as she is given an injection as part of a malaria vaccine trial in the Kenya coastal town of Kilifi, November 23, 2010. Malaria threatens half the people on the planet and kills around 800,000 people a year, many of them too young to have even learned to walk. The death rate has come down in the last decade, but full-scale eradication will cost billions and drag funds away from other equally, or possibly even more urgent health efforts.

Almost 200 million are affected by malaria each year… but this number is expected to drop drastically in the coming years.

The first anti-malaria vaccine has been approved by the European Medicines Agency after almost 30 years of research. The World Health Organization estimates the disease kills more than a half-million people a year, mostly children. Malaria is mainly transmitted by mosquitos in sub-Saharan Africa.

The vaccine was developed by British pharmaceutical giant GlaxoSmithKline, working in conjunction with the PATH Malaria Vaccine Initiative and has been named Mosquirix.

“This is a really important scientific and regulatory milestone because it confirms that it’s biologically and technically feasible to make a malaria vaccine that has a favourable benefit-risk profile. So what this means is, we now have a new tool to combat this parasite,” PATH vice president David Kaslow says.

The focus of this vaccine has been targeted to the most affected part of the population, children. 90 percent of all malaria cases were detected on children.

The United-States managed to eradicate malaria from the country but the landscape in sub-Saharan Africa is very different. Kaslow explains why this part of the world is the most affected.

Some research show that the vaccine is only 30 percent effective and that the efficacy wanes over time. But according to Kaslow, 30 percent is better than nothing. “Slightly more than 980 clinical malaria cases are averted in infants, per thousand infants vaccinated over a 38-month period of followup,” Kaslow says.