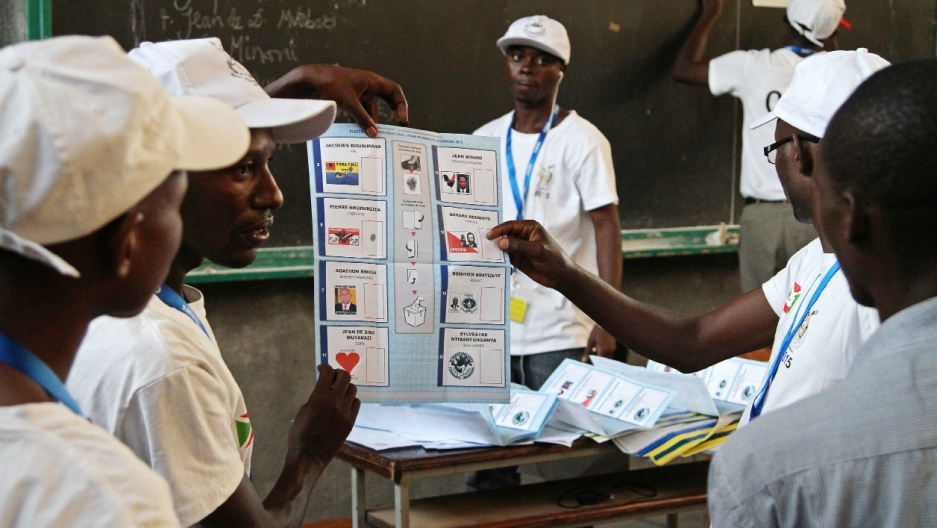 Members of Burundi's Independent National Electoral Commission count votes at a polling station at the University of Burundi in Bujumbura on July 21, 2015. Burundians voted amid gunfire and grenade blasts.
Credit: LANDRY NSHIMIYE
Share

Nkurunziza won 69.41 percent of the vote in Tuesday's vote, handing him an immediate first-round victory, the election commission said.

He won 16 out of 18 provinces, with the other two taken by his closet rival Agathon Rwasa — who won a total 18.99 percent — even though he had denounced the polls as illegitimate.

More from GlobalPost: What happens next in Burundi could transform the whole region

Nkurunziza's candidacy was condemned as unconstitutional by the opposition and provoked months of protests and an attempted coup in the central African nation.

Although eight candidates were on the ballot paper for the presidential polls, most withdrew from the race, with the closure of most independent media preventing them from campaigning.

Anti-Nkurunziza protests have been violently repressed, leaving at least 100 people dead since late April. Many opponents have also fled —joining an exodus of more than 150,000 ordinary Burundians who fear their country may again be engulfed by widespread violence.

In mid-May, rebel generals attempted to overthrow Nkurunziza in a coup, which failed. They have since launched a rebellion in the north of the country.

More from GlobalPost: Burundi's president is crowdfunding his unconstitutional re-election

Turnout in the polls was 73.44 percent, the election commission said.

In the latest in a string of attacks, four people were wounded in a grenade attack overnight Thursday on the house of an official from Nkurunziza's ruling CNDD-FDD party.

The government has dismissed criticism of the poll, which the United States, European Union and former colonial power Belgium said lacked credibility.

The European Union said Thursday it would begin reviewing its cooperation with Burundi, including trade, political cooperation and development aid.

The 51-year-old president — a former rebel, born-again Christian and football fanatic — faced no serious competition in the polls, but critics have said his win will be a hollow victory, leaving him ruling over a deeply divided nation.

Analysts say renewed conflict in the country could reignite ethnic Hutu-Tutsi violence and bring another humanitarian disaster to the region. The last civil war in Burundi left at least 300,000 people dead.​