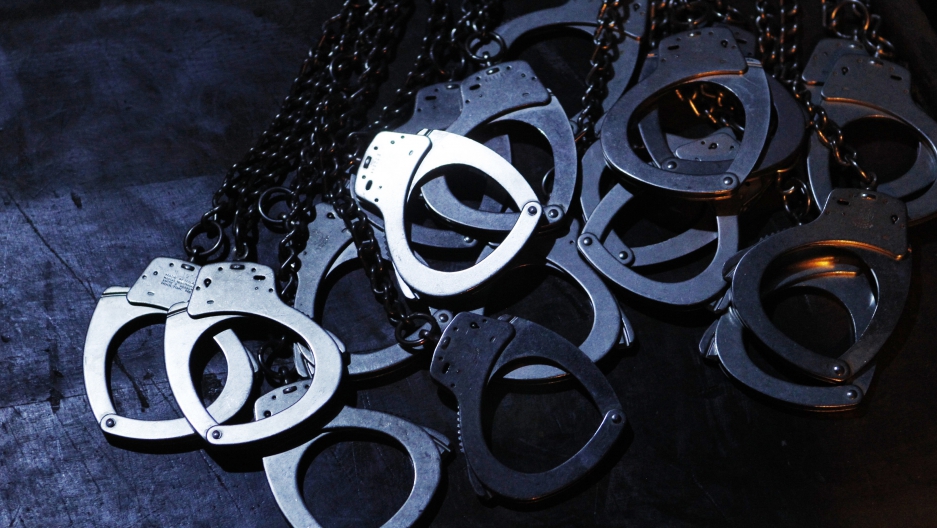 The handcuffs of inmates are seen during a play at a public theatre in Lima, June 20, 2012.

When Kenneth Fomby went down to the police station in a town outside Birmingham, Alabama, in March 2006, he thought he just needed to have a quick chat with police to clear his name. He was facing charges of robbery, kidnapping, sodomy and false use of credit card — but he maintained his innocence.

“When I came to talk to the detective,” Fomby recounts, “they immediately started processing me. They told me what my bond was, what my charges were. ... I was arrested, and as they brought me in, they were clapping and saying, ‘We got you now.’”

“I asked for a phone call. ... I slammed the phone down and the riot police immediately came. Within five hours, I was in the medical infirmary where I was beaten severely and sent to solitary confinement.”

He spent a week in solitary confinement. His father, a pastor, came down to see him soon after. He told his son, “You have to be quiet and shut your mouth or they’re going to kill you in here.”

Fomby was 19 at the time — a normal teenager living in Pinson, Alabama. The evidence of his innocence seemed strong: There was video evidence of him in another town; there were cell phone records; there were fingerprints. But he would turn 20 in Jefferson County jail, where he spent over six months because he couldn't pay the $2 million bail. The charges were eventually dropped.

While $2 million is abnormally high for bail, the result of the severity of the charges against Fomby, his case shows how high bail is often a mechanism that keeps accused people stuck in jail without trial. In New York City, Kalief Browder was held at Rikers Island for three years for allegedly stealing a backpack, because his bail was set at an out-of-reach $3,000. Browder suffered abuse and extensive solitary confinement. The charges were eventually dropped and Browder was released, but he committed suicide last month.

In theory, bail is a mechanism to guarantee a defendant’s appearance at trial without having to hold them in jail. It acts as a form of fair collateral — the “fairness” being built into the Eighth Amendment of the Constitution, which reads, “Excessive bail shall not be required.” It is one of the most explicit limitations on the government’s power to hold people after an arrest. But cases like Browder’s and Fomby’s show how bail has in many jurisdictions become a way of holding people indefinitely without trial.

In jail, Fomby continued to maintain his innocence.

“No one would believe me or take me seriously. Eventually I got the privilege to go to the law library — so I fought my own case. I did have legal representation — paid representation — but nobody was moving as fast as I wanted them to move.”

He filed his own speedy trial motions, which were denied four times. But the prosecutors and the judges wanted to wait for DNA evidence before trial. Rather than prosecutors proving his guilt, Fomby had to prove his innocence.

As the weeks passed without movement, the pressure began to increase, and Fomby’s mental state began to deteriorate.

“The mental strain that it puts on you — you question everything. You question God, you question yourself, you question life. I felt I was more of a problem than I was of any help, so why be here? Why hurt the people I love because I can’t catch a break?”

“I tried to hang myself. It’s just because I was alone — hurting and alone. It’s too much of a mental toll, with the demons you have to fight. “

The only difference between him and Browder, Fomby says, is the time — “I only did seven months, thank God” — and that someone was there to step in.

Unlike Browder, Fomby was eventually able to expedite his case, in part the result of the tremendously high bail. After a judge told Fomby, who had been in jail for six months at that point, that his next court date would be in another six months, he snapped.

“I’m not going to just sit here, while you and everyone else acts like it’s nothing.”

He demanded that the judge make his case a priority, just like they had made it a priority to keep him there. Fomby told the judge to write to the court in Montgomery to expedite his trial. She did so, and within five days received a letter back unofficially confirming that the fingerprints at the scene of the crime were not Fomby’s. Soon after, he was released, although still on bail — a more reasonable $20,000.

Ten months after he entered the police station, his case was dropped entirely.

One of his first stops once released was his old college, where he had to go because someone had broken into his dorm room and was writing fraudulent checks.

“I had to explain to them how I didn’t buy $20,000 of things at Wal-Mart, because I have receipts of being in jail for the last seven months.”

He says he also lost his job, lost the contract on his house and had his identity stolen.

Fomby is now 28, and lives with his wife and children in Pinson. He’s happy to be alive and well. But readjustment hasn’t been easy.

“I want to say that I got everything back, because it’s developed me to be who I am. Since I have an opportunity, and I have a good heart, and I am a good person — it didn’t take my character away. ... But there’s a paper trail for me that I have to live with. Regardless of what I’ll ever get back, I’m going to have to take the time to explain myself, for something that I have not done, for the rest of my life.”

Fomby notes that it’s not simply him that was impacted. His father — who shares the same name as his son — his wife, and his children, all have to live with the effects of a crime he didn’t commit.

“I went to the therapist for over two years straight, and it still hurts. It still hurts to know that I couldn’t control my future, and the basic American dream to me was a ransom of $2 million.”

This story first aired as an interview with PRI's The Takeaway, a public radio program that invites you to be part of the American conversation.