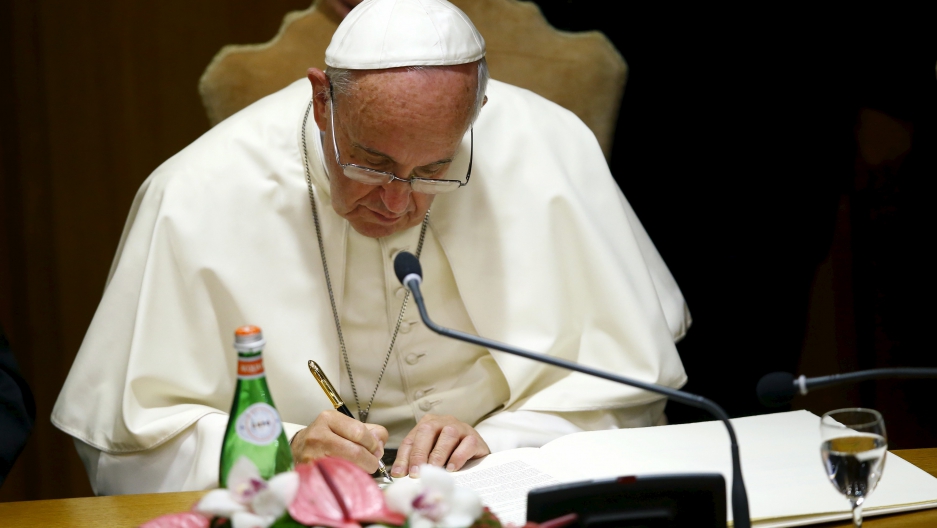 Pope Francis signs a declaration during the "Modern Slavery and Climate Change" conference at the Vatican July 21, 2015. Pope Francis on Tuesday urged the United Nations to take a "very strong stand" on climate change at a landmark summit this year in Paris on global warming."

Pope Francis invited more than 60 mayors from all over the world to the Vatican this week to discuss climate change and human trafficking — two topics that seem separate but that the pope sees as linked.

“The pope, as you know, has issued several calls focused on the consequences of climate change, and one of those consequences, he believes, is human trafficking. Individuals are forced from their lands or from their countries because of climate conditions. Things are getting worse. Crops are dying so they are on the move,” says WGBH News reporter Philip Martin, who traveled to the conference to cover the participation of Boston Mayor Marty Walsh.

The pope believes climate change puts people into poverty and makes them vulnerable to smugglers who will trick the migrants into forced labor and trafficking. At the end of the two-day conference, the mayors signed a declaration committing to tackle this problem.

In the meantime, though, while mayors from around the world were in Rome pledging to deal with some of the biggest problems of our day, Rome couldn't even get the trash picked up, because of a strike by the city's garbage collectors. 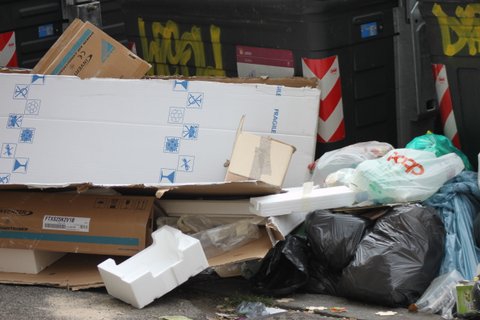 This comes right after Rome's mayor, Ignazio Marino, announced he would eliminate the mafia from all government contracts.

“There’s trash all over the city of Rome and that situation was exacerbated by this ironic effort to clean up the city of corruption," Martin says. "This while a conference of mayors is going on, directed at environmental degradation. It’s quite ironic."

And the irony reaches another level, as Rome broiled under a heat wave — and the air conditioning in the conference room where the mayors gathered wasn’t really efficient.

“This of course invited chuckles from some reporters, to see mayors fanning themselves and talking about climate change and global warming,” Martin says.