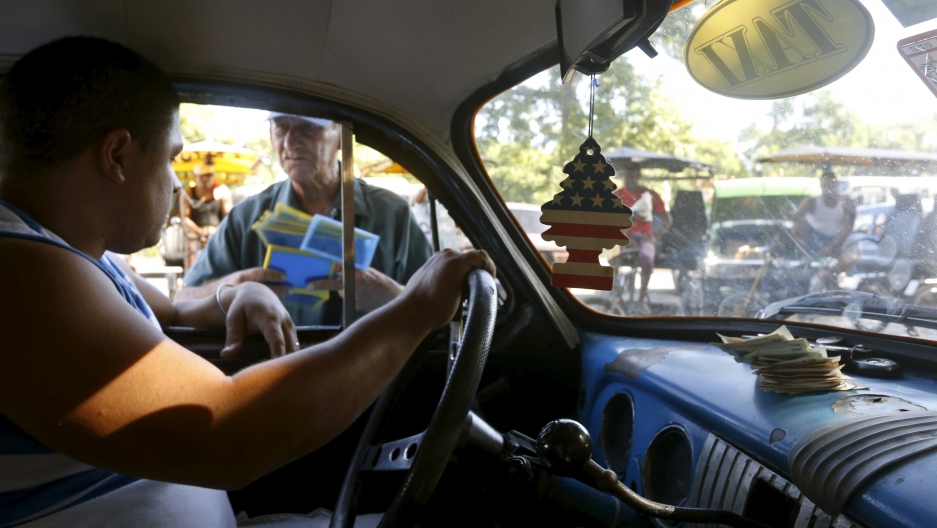 There’s a certain magic about Cuba.

“Trapped in a time warp and reeling from an economic embargo that has grated for more than half a century, this is a country where you can wave goodbye to Western certainties and expect the unexpected,” writes Brendan Sainsbury on the travel website Lonely Planet. “If Cuba were a book, it would be James Joyce's Ulysses; layered, hard to grasp, serially misunderstood, but — above all — a classic.”

But now that the US and Cuba are normalizing relations, is that nostalgia-fueled getaway doomed?

It might be. There are certainly some bad signs, like Airbnb’s announcement that they would be covering costs for all of their Cuban bookings this week.

To our guests who booked trips to #Cuba this week, good news: We're celebrating the embassy re-opening and your stay is on us!

Or that even though only about five percent of Cubans have Internet access, Netflix announced in February that they were bringing the American tradition of binge-watching Orange is the New Black and House of Cards to the island.

Finally, Carnival Cruise Lines has gotten permission from the US government to offer cruises to Cuba in spring 2016. This certainly isn’t a given, seeing as the cruises need to be approved by the Cuban government, who need to decide if the country's infrastructure could handle that kind of tourism. But it’s definitely a first step.

“It’s going to change. Maybe it won’t ruin it, since every country has a right to evolve and modernize. But I think it’s going to change a lot,” says Enrique De Jesus, a 25-year-old doctoral student traveling to Cuba in October with the University of Puerto Rico.

He’s going with a program to investigate Cuba’s financial system, but he said his main reason for going is to get a chance to see Cuba before outside influences change the culture too much. Puerto Rico used to be a lot like Cuba in the 1950s, De Jesus says. But today, life in Puerto Rico looks a lot different, and his generation is different as a result.

“We don’t want to do agriculture or things like that. We want to be in an office with an air conditioner. We want to have new cars. We want to have the best house. We want to go to the best university. It’s basically the American life. That’s what we have in Puerto Rico now, and that’s what probably going to happen in Cuba. People change,” he says.

Steve Bramucci, the managing editor for UPROXX Life, echoed De Jesus’s concerns in his piece entitled “Travel to Cuba now before it becomes a tourist trap — here’s how”.

“The resorts will say the right things about honoring Cuba’s history (“romanticized history” will surely be the country’s brand), but there’s a difference between riding in a 1950s Plymouth máquina from point A to point B versus just sitting in that Plymouth (restored and permanently parked in the hotel lobby) for a photo. The authenticity that has made Cuba into a beloved travel destination, due in large part to how dramatically different it is from the United States, won’t last forever,” he writes.

At the same time, Bramucci acknowledges it's unreasonable to try and apply judgement to that change.

"You don't want to be the person who's also saying, 'I wish this place would not develop the technologies that I enjoy every single day.' It's not really fair to say Cuba was ruined by WiFi when we all have WiFi. How are we going to keep that away from someone else?" he said in an interview. "It's just the reality. If you want that back-in-time Cuba, you want to go sooner rather than later."

But before you sprint home and book a ticket, there are some things to know. First off, take a breath. You shouldn’t expect to see McDonald’s and Starbucks flood the country any time soon.

“Turning off sanctions isn’t like turning on a spigot to foreign investment and trade,” Jake Colvin, a vice president for global trade issues at the National Foreign Trade Council, told PRI back in January.

Someone might want to tell that to Arnold Donald, president and CEO of Carnival Cruise Lines. “When the embargo is lifted, we will be ready to go,” he told CNN in March. “There’s a lot of pent up demand in the United States to visit Cuba.”

Second, American tourists still aren’t allowed to travel to Cuba solely for tourism. Instead, a visit needs to fit within one of 12 categories that the US government has deemed acceptable, such as visiting family, education or religious purposes. Unless you use one of a few well-known tricks, such as flying in from another country and asking them not to stamp your passport, you still can't vacation in Cuba.

So while there’s definitely an expiration date on the Authentic Cuban Experience™, it’s still a while away.