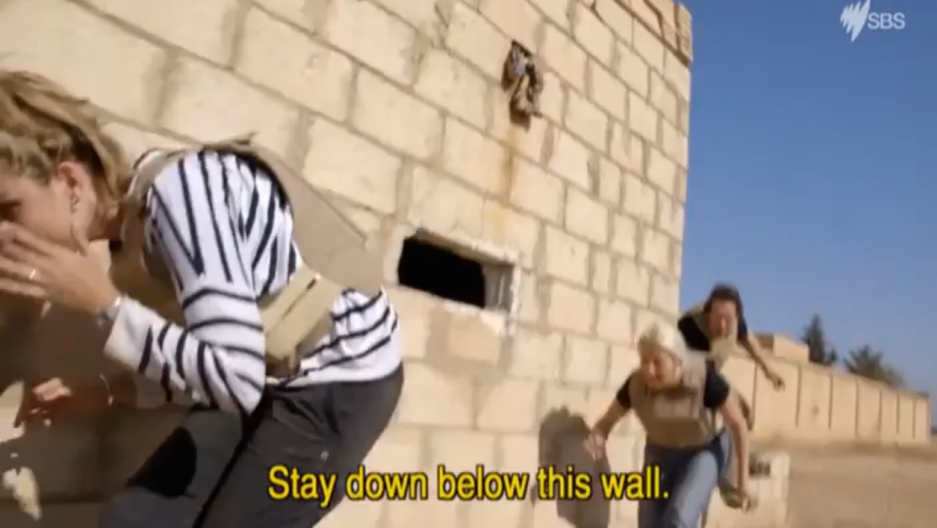 Reality television is all about winning over viewers with risk-taking, but one Australian show went a little too far.

The show, called "Go Back to Where You Came From," nearly killed several of its participants when it reportedly dragged them through an active Syrian war zone.

In a trailer for the upcoming season, Kurdish militants escort three of the show’s personalities across the Iraqi-Syrian border. Roughly half a mile from Islamic State (IS) positions, guns start firing at them. A voice calls out, “They’re coming for us!”

The Kurdish fighters and camera crew then rush the group out of a damaged village and have them crouch behind a wall, wearing little more protection than flak jackets. One participant later remarked that it was “a lot more than we bargained for.”

The show is a three-part reality series aimed at sparking a conversation on immigration by sending six Australians to see refugee conditions in person.

At the center of the program is a hope to further the very real national debate about Australia’s asylum policy. Following a 2010 disaster where the bodies of asylum seekers set for Australia washed up on the shore of Christmas Island, many have pushed the country to change one of the harshest border policies in the world. The now-adopted “stop the boats” policy turns away would-be refugees altogether, and then forces them into detention centers.

More from GlobalPost: If you thought Australia's border policy couldn't be more unsympathetic, you were wrong

While the show seems to be after a worthwhile discussion, its producers have engineered some insanely perilous situations for its participants over the years. Labeling itself as an “immersive, reverse journey to some of the most inhospitable and dangerous places on earth,” its “journey” has previously transported its participants through jungles, subjected them to simulated immigration raids and shipped them across the ocean on leaking refugee boats in some kind of Man Vs Wild “experiment” on social consciousness.

It is a reality show, of course. Some Fear Factor-esque stunts are to be expected. But sending your television show into IS-controlled territory is an entirely different matter.

Syria has been home to a deep and intractable civil war since 2011. The conflict has spawned the largest refugee crisis in a generation, with at least 4 million individuals registered for UN refugee status and an additional 7.6 million displaced. It’s also one of the most dangerous countries in the world for journalists and aid workers alike. Going into the country requires an extreme level of care and precision that the show clearly didn’t provide.

More from GlobalPost: There are now more refugees around the world than any other time in the last 50 years

According to a statement to the Sydney Morning Herald from participant Kim Vuga, the entire group was well within ammunition range.

“Probably the worst part was going as close as we could and knowing that their bullets could reach us. We were told to listen for any whistling sounds coming through the air and that would mean a mortar had been fired. We were told we had 30 seconds to run 100 metres,” Vuga said.

Even worse, her co-star Nicole suggests they didn’t even know where they were going. “When we crossed the border from Iraq into Syria, I kind of thought we would maybe go to a refugee camp near the border, meet some families, but once we crossed the border we drove for like four hours and it kind of dawned on me we were going to an active war zone.”

This isn’t the show’s first run-in with international war zones, either. Past seasons took the participants to Baghdad, Kabul, Mogadishu and the Democratic Republic of Congo.

Discussing the plight of refugees is admirable, but this kind of a stunt? Who does it help? Taking civilians into war zones in an attempt to scare them straight on international issues can quickly veer into disaster tourism.