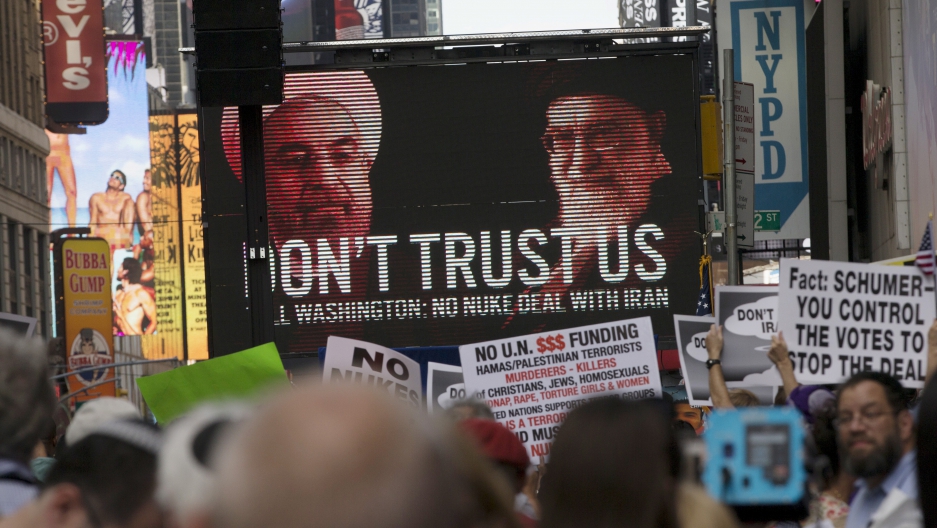 An image of Iranian leaders is projected on a giant screen in front of demonstrators during a rally apposing the nuclear deal with Iran in Times Square in New York City, July 22, 2015.

According to a recent Amnesty International report, Iran's execution tally is skyrocketing. At this rate, the country could see more than 1000 executions by the end of the year.

Elise Auerbach, Amnesty's Iran country specialist, says there's strong evidence that Iran executed 743 people in 2014. That's an alarming statistic, but what's more alarming is that this year's tally is already at 694. That's as of July 15 — and there's plenty of the year left to go. By comparison, there have been 18 executions in the US.

More often than not, Auerbach says, the executions result from drug offenses. Iran has one of the highest heroin addiction rates in the world, but Auerbach doesn't think this justifies heavy use of the death penalty.

"We believe the Iranian government has a right to address this huge social problem, but execution is not the answer," Auerbach says.

Another issue with Iran's execution strategy is a lack of fair trials.

"A lot of the people targeted to be executed for drug trafficking are poor, marginalized people," Auerbach says. Once arrested, "they're tortured in order to extract confessions, and then these confessions are used against them in their so-called trials."

Amnesty officials hope a worldwide letter campaign might given Iranian leaders pause, and at least slow the rate of executions.

Auerbach points to a big success a few years ago, when a Christian pastor was sentenced to death for apostasy. "We bombarded the Iranian government with appeals," Auerbach says.

The pastor was eventually released, Auerbach believes, largely in part due to the global outcry.