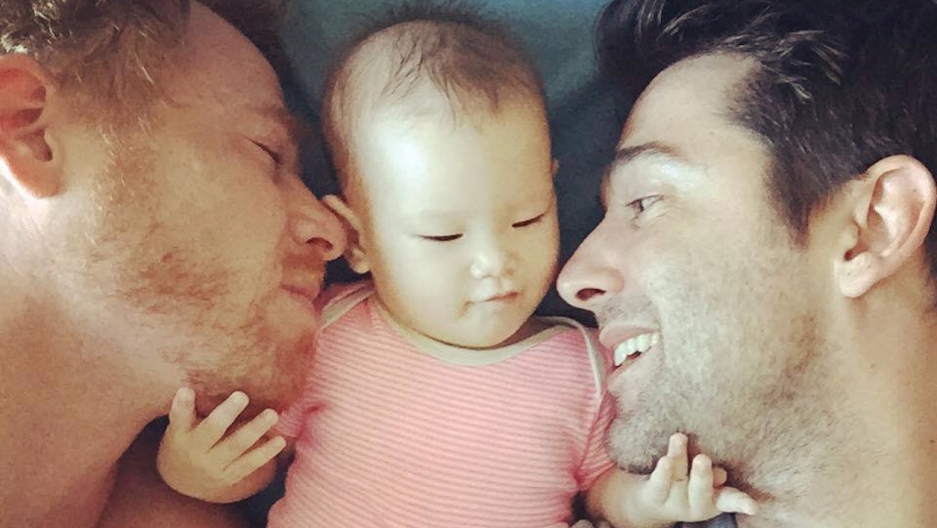 Gay fathers Bud Lake and Manuel Santos with their child conceived by a surrogate mom in Thailand. They claim she sabotaged their custody process after realizing they're a gay couple.
Credit: @twogaypapas on Twitter
Share
BANGKOK — When it comes to gay visitors, Thailand doesn’t flinch. Two men sharing a hotel room on a tropical isle? No problem. Foreign women strolling hand in hand? Fine.

For tourists, Thailand can feel like an oasis of gay acceptance in a world that’s often hostile to same-sex romance. This vibe is nurtured at the highest levels: the government actually runs a campaign called “Go Thai, Be Free” to attract spendy gay travelers.

But a dramatic case involving two gay dads — one American, one Spanish — highlights a less alluring reality: Thailand is not the LGBT paradise it often appears to be.

The two married fathers — Bud Lake and Manuel Santos — used a surrogacy agency to hire a Thai woman who agreed to carry their child. The baby is the product of Lake’s sperm and an anonymous donor’s eggs. (Prior to this arrangement, the couple and the Thai surrogate were strangers.)

In January, the couple traveled to Bangkok to await the child’s birth. It went smoothly and the surrogate mother, according to the men, signed much of the paperwork releasing the child into their care. The men named their baby Carmen.

But the couple’s self-described nightmare kicked off when the woman explained to their lawyer “that we were not an ordinary family,” Lake told GlobalPost. “She doesn’t think two men can bring up a child.”

The surrogate mom has since refused to sign documents that would allow the child to leave Thailand and to fully relinquish her rights as the birth mother. “Emotionally, we’re just shocked,” Lake says.

The woman, who does not share the baby’s DNA, has appeared in disguise on Thai TV insisting that “I had no idea this was a gay couple” when she first signed on and saying that “the child was in my belly ... so we have the same heart.” The custody dispute is unsettled and in a legal grey zone. So the couple is currently hiding in Bangkok with the infant as they battle for full legal custody.

The case may be surprising to those who see Thailand as a bastion of gay tolerance. In many ways, it is. But discrimination against gays in Southeast Asia’s Buddhist-centric mainland has a decidedly different flavor than US-style anti-gay prejudice.

In Thailand, the prejudice often doesn’t kick in until homosexuality enters the perceived sanctity of family life.

Thailand’s attitude toward homosexuality is far less puritanical than those held by America’s religious fundamentalists, who believe gay life is a corrupting force on society.

In Thailand, gay is generally seen as OK. When the government floated a proposal in recent years to legitimize same-sex couplings, there was no great backlash. The nation simply shrugged. According to one poll, nearly 90 percent of Thais report having gay friends.

But as Lake and Santos have learned, the prejudice often doesn’t kick in until homosexuality enters the perceived sanctity of family life.

The notion of gay parents remains highly taboo in Southeast Asia. Society has yet to shake a deep-seated notion that homosexuality, while no grave sin, is still an imperfection. The superstitious may even regard it as a minor curse warranted by a past life’s misdeeds.

Even youth, often assumed to be enlightened on LGBT rights, report a surprisingly high level of anti-gay sentiment. In a recent poll of Thais aged 15- to 24-year-olds, more than one-quarter said they perceive homosexuality as “really wrong.” Another 29 percent considers it “not so terrible” but still wrong. (The rest, 44 percent, called homosexuality “not wrong at all.”)

Gay men are tolerated in Thai society, especially if they adhere to foppish stereotypes. Transgender women — so prominent in the world’s image of Thailand — are welcome too so long as they are garish entertainers or sexual playthings, not objects of serious romantic love.

But when it comes to family, many in Thailand do indeed flinch at homosexuality. The most recent polling suggests 60 percent of Thais have "no objection" to gay marriage while 35 percent oppose it.

Foreign tourists can take the government’s suggestion and “go free” with little fear of judgment. But gay men (foreign or otherwise) who try to become fathers will find that much of Thai society, deep down, believes they are unfit to raise a child.

Much of society, perhaps, but not all. “I still think Thai people are very loving and accepting,” Lake says. By the thousands, Thais have flooded the couple’s Facebook page to wish them well. “We’re hoping the media attention will help show more Thai people that two men can be wonderful parents.”