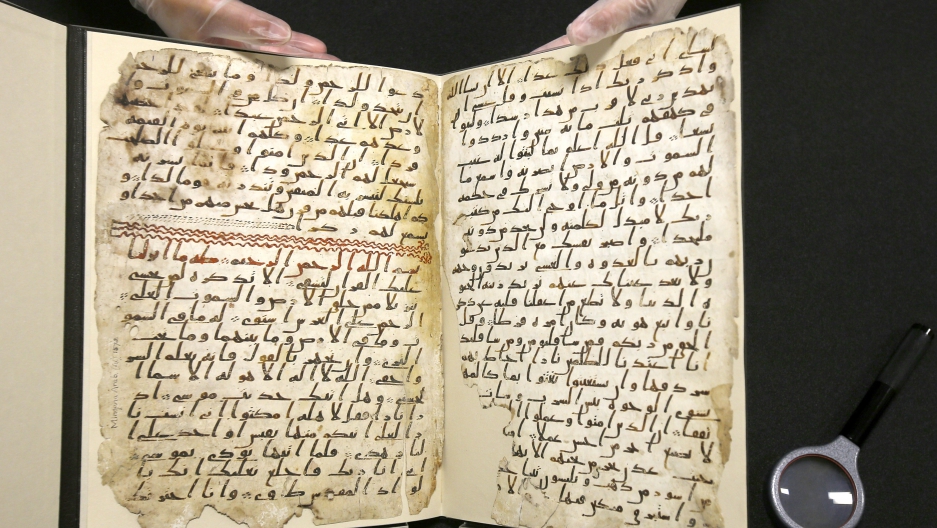 This Quranic manuscript found in the library of the University of Birmingham is one of the oldest surviving copies of the Islamic text in the world. Radiocarbon dating indicated that the parchment is around 1,370 years old.

It’s only a couple of pages. But a recently discovered Quranic manuscript appears to be one of the oldest ever found.

But it wasn’t unearthed by an intrepid archeologist toiling away somewhere in the Middle East. This text turned up at an English university.

The manuscript is written in an ancient form of the Arabic language called Hijazi on pages of parchment made from the skin of a lamb or goat. For decades, this writing was hidden away in the archives at the University of Birmingham.

The pages were simply misfiled alongside some other Middle Eastern manuscripts. And they might have remained there for some time to come, if a graduate student had not come across them while doing some research and then notified the university.

Radiocarbon dating found that the ancient Quranic scripture to be around 1,370 years old.

“We were expecting it to be early, but we did not, I think, in our wildest dreams expect that it would roughly correlate to the lifespan of the Prophet Muhammad,” Susan Worrall, director of the university’s special collections, told the BBC.

Muslims believe that Muhammad, who lived from 570 to 632, received God’s word through the voice of the angel Gabriel and he conveyed it verbatim to his friends and early followers. The revelation from Muhammad is what makes up the holy Quran, which for Muslims is seen as God’s full and final guidance on all aspects of human life.

The fragments of Quranic scripture found in Birmingham could even be a direct link to the prophet himself, according to the university’s professor of Islam and Christianity, David Thomas.

“If the dating of our Quran is correct, then the person who actually wrote it may well have known the Prophet Muhammad. He would have seen him probably. He would maybe have heard him preach in Medina,” Thomas said. “Muhammad lived the last 10 years or so of his life in Medina. [The author] may have known him personally and that is really quite a thought to conjure.”

The ancient manuscript made its way from the Middle East to the English midlands back in the 1920s. It was brought by an Iraqi priest named Alphonse Mingana, originally from an area near modern day Mosul, who was sponsored to collect materials to boost Birmingham’s status as a center for religious studies.

Today, the city has a large Muslim immigrant population and people are delighted to have a small but significant piece of Islamic history in their backyard.

“When I saw these pages, I was very much moved and there were tears of joy and emotions in my eyes,” said Muhammad Afzal of the Central Mosque in Birmingham. “We’d never thought we would have such an old copy of our holy book. I’m quite sure that even the people from all over the UK will come here to Birmingham just to have a glimpse of these pages.”

The university plans to put the manuscript on public display.

“People will love this,” Afzal said.