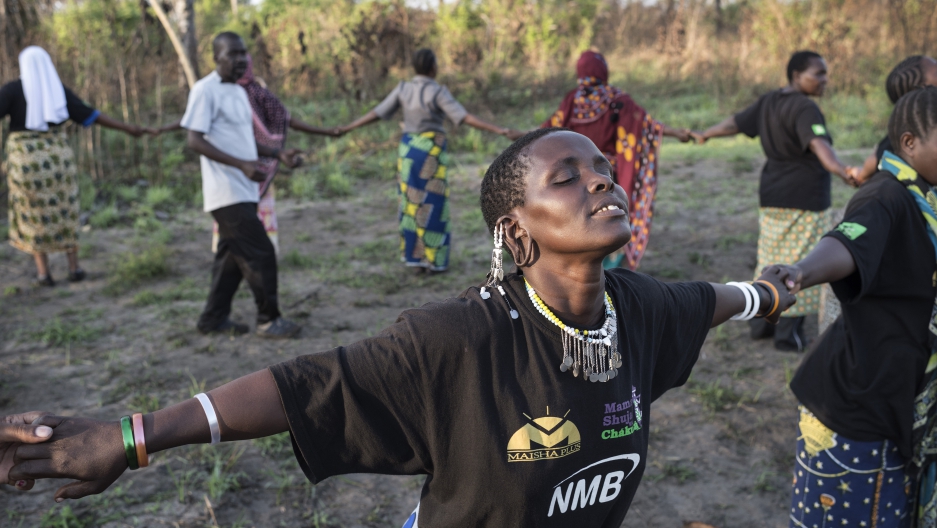 Most people would say that reality television isn't necessarily a good place place to look for role models. But in Tanzania, that's exactly the goal of a reality show named "Female Food Heroes."

“Female Food Heroes,” or Mama Shujaa wa Chakula as it is known in Tanzania, stars a group of female farmers who live and work together in a village. The “village” is actually a specially-constructed set — which is where the reality-show cameras come in. Producers film the women sharing farming techniques with each other while being trained on such things as leadership and finance. Viewers vote on whose work they like best, and each season, a winner is chosen by a combination of these votes and a panel of judges.

As in many reality shows, “Female Food Heroes” features challenges. This season, participants struggle to use local materials to create a tool, try out new cooking techniques, and win a treasure hunt. Eluka Kibona, who works on the show in Tanzania, says the competitors “have to use their own own local knowledge. They have to use their own experience, they have to use their background.” Outside experts also visit to talk about everything from agronomy to gender-based violence to climate change. The women also visit banks and food processing companies to learn more about the larger economy around them.

In Tanzania, poverty is concentrated among small-scale rural farmers, such as the women who compete on “Female Food Heroes.” They rely on what they grow to feed themselves and their families, since most poor farmers in Tanzania lack the access to infrastructure and investment they would need for more secure livelihoods.

And this hits Tanzanian women especially hard; according to Oxfam, women are 75 percent of the country’s agricultural labor force, but cannot get loans and are often denied ownership of their land. In addition, most social attitudes about female farmers are negative. Women aren’t necessarily valued, or appreciated, for what they bring to the table.

So Oxfam and its Tanzanian TV partner, Maisha Plus, set out to change attitudes and empower female farmers through the show. Since “Female Food Heroes” started in 2011, it has reached about 25 million people throughout the country. Part of the show’s success comes from it being both informative and fun. “We were really thinking throughout this whole thing: How can we make it not only entertaining but also educative?” Kibona explains. She says she wants viewers to come away “not talking only about the show, but talking about the issues of the show.”

After episodes are broadcast on TV, they’re made available on Facebook and YouTube. And since many people in Tanzania don’t own TVs, Oxfam also bought time on local radio shows in Tanzania to air episode re-caps in audio form.

The top three winners are awarded a prize from Oxfam. Kibona says for Oxfam, “everybody who is a part of the show is a winner.” But she also recognizes that part of the appeal of the show is the selection of a top contestant. This year, the prizes are between 20 million and 25 million Tanzanian schillings (approximately $9,000 - $11,000), in the form of cash and farming and fishing tools. These women generally go on to help bring modern farming equipment and techniques to their villages and communities. One woman now represents the farmers on her local council and shares the tractor she won with her neighbors. Another uses her farm to house and support orphans and vulnerable children.

Because the show is so popular, contestants often become local celebrities after having competed. They return home with their new skills and knowledge, and often help model these new techniques for their communities. Oxfam says that the government of Tanzania has begun to introduce new policies related to land leases that may have been influenced by the huge popularity of the show.