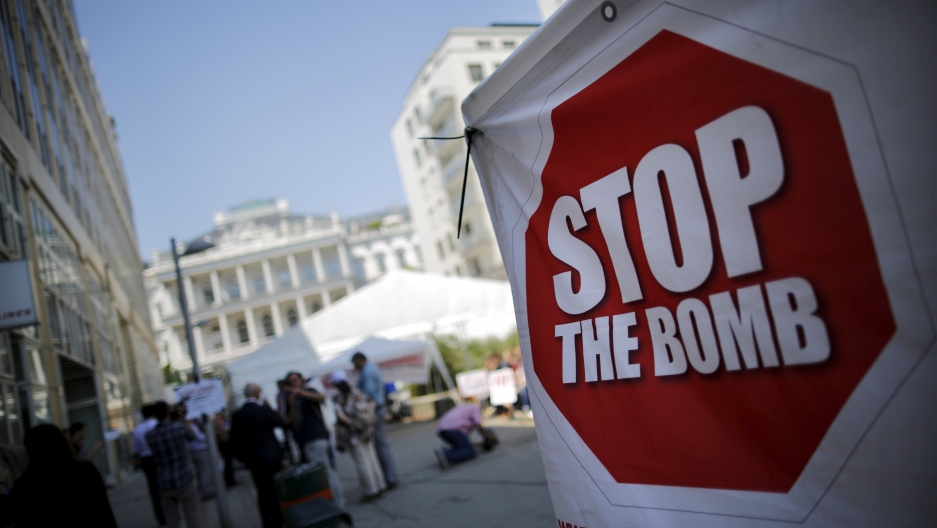 A 'Ban the Bomb' sign earlier this month outside nuclear talks in Vienna.

An obscure facility at Los Alamos National Laboratory for nine years provided vital scientific data about a critical gas used in America’s arsenal of nuclear weapons, until it was shuttered four years ago because of a raft of safety problems that have stubbornly persisted.

The Energy Department, which oversees and finances the lab’s work, has poured tens of millions of dollars into fixing the problems, but so far, the expenditures haven’t borne much fruit. The facility — known as the Weapons Engineering Tritium Facility — is “vital” to the lab’s national security mission, but it remains closed, the department’s inspector general said in a report released July 20.

In fact, Los Alamos managers have been unable — after seven years of effort —even to prepare a sound analysis of the site’s safety hazards and the steps being taken to ensure that the radioactive gas at issue does not leak or explode and harm either workers or those living nearby, according to the DOE report.

DOE Inspector General Gregory H. Friedman said in the report that poor hazard analysis has been a recurrent problem at the lab, and said weaknesses in other projects have remained unfixed from one annual evaluation to the next. The lab, he wrote, “lacked sufficient qualified staff to resolve certain safety issues.”

The purpose of the tritium facility is to refine, mix and analyze that high-hazard gas, which is used in small amounts to boost a nuclear bomb’s pulverizing force. Those who worked at the facility struggled to ensure that monitoring equipment accurately tracked oxygen levels, to avert any chance of a sudden combustion during processing, according to the report. The lab’s own assessments, dating back to 2007, warned that the oxygen monitoring system in the building was unreliable. Energy Department staff in April 2013 cited the oxygen monitoring as one of 450 issues that needed to be addressed there.

Although the lab fixed the oxygen monitoring system last year, and so far has spent $17 million to prepare a comprehensive safety plan, it hasn’t completed the task. “There had been higher safety-related priorities” at the lab, Energy Department staff told auditors.

Greg Mello, executive director of the Los Alamos Study Group, a nonprofit organization that closely monitors the lab, said the report suggests the lab’s managing contractor, Los Alamos National Security LLC — or LANS — a Bechtel-led consortium of private contractors and the University of California, has been nonchalant about safety issues.

“It’s obvious when you read this report that [preparing a] documented safety analysis, which is the sole way that DOE manages the safety of nuclear facilities, is seen by LANS as a kind of overhead or paperwork that can be repeatedly kicked down the road, under-resourced and nixed in some political sense,” Mello said.

The Inspector General’s report noted that similar safety problems have blocked operations at a separate lab facility that produces plutonium triggers for nuclear bombs. Lab leadership halted operations at that facility two years ago. Revisions to the safety analysis at the Plutonium Facility have dragged on for six years and cost nearly $10 million so far.

In all, the report said, Los Alamos lab officials failed to show they had addressed 11 percent of the 98 high-hazard concerns identified by Energy Department inspectors between January 2010 and February 2014.

Instead of acting on a November 2011 DOE directive that said the lab should review whether its training of workers who handle hazardous nuclear materials was effective, managers decided the task would be “moved out a ways,” according to the report.  But they never revisited it, the report added. Similarly, the lab hadn’t completed more than a third of the 36 lower-risk directives from the department over the same four-year span.

The report said lab officials told the inspectors that the lab needs more money to fix its safety deficiencies. But Mello questioned whether giving the lab more money would change its commitment to safety. Under LANS’ contract with Energy Department, it is paid $2.2 billion annually for operating the lab and is eligible for bonuses of more than $60 million a year, according to Department of Energy records.

At Los Alamos, “safety is considered a pain in the ass, not a part of the mission,” Mello said.

A lab spokesman did not respond to messages seeking comments about the report. But the lab has published statements saying that safety is its first priority. In thick, bold letters, the lab’s website says, “We integrate safety, security, and environmental concerns into every step of our work.”

Frank Klotz, the Energy Department’s undersecretary for the National Nuclear Security Administration, said in a written response to the Inspector General that he generally agreed with Friedman’s conclusions that LANS needs to prioritize safety and learn from its past mistakes.

“Actions are already underway to address the issues,” Klotz wrote.

Klotz wrote that he expects the plutonium facility to resume full activities by late 2016, and hopes the Weapons Engineering Tritium Facility will restart its work by the end of this year.

This story was cross-posted by The Center for Public Integrity, a nonprofit, nonpartisan investigative news organization in Washington, D.C.