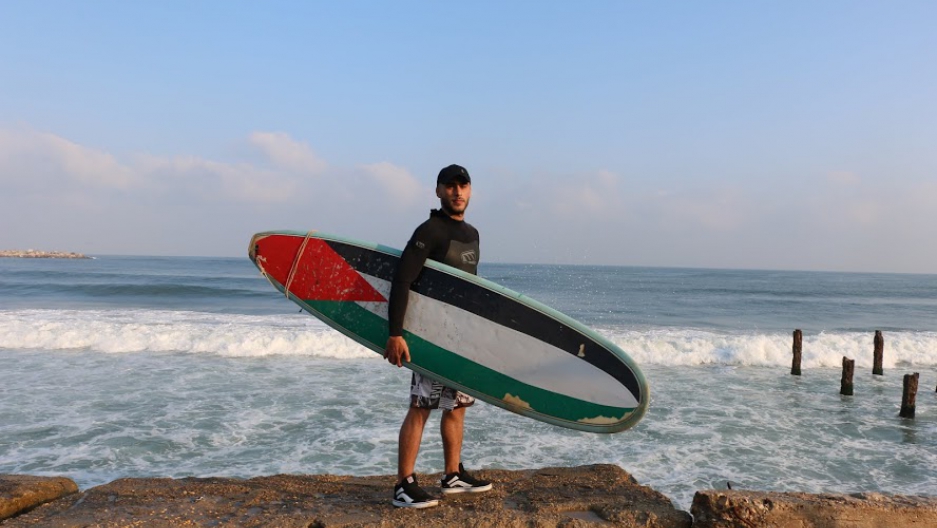 Taha Baker stands with his surfboard on a beach in Gaza.
Credit: Laura Dean
Share

GAZA CITY, Gaza — The sea off the Gazan coast is an inhospitable place. Long stretches of the beach smell like sewage since the wastewater system was damaged by Israeli bombs during the war in 2014. Ninety million liters of raw or partially treated waste gush into the Mediterranean every day.

A little further out the water is even more perilous. Gazan fishermen are only allowed to go up to six nautical miles offshore, and are routinely shot or detained by the Israeli Navy as they go about their work.

All of that might deter others from spending too much time in the water when they don't have to. But not Taha Baker, part of a small but growing group of surfers who brave the waves off the Gaza coast.

Just five years ago Taha’s cousin was killed next to him while the two were out fishing. He was killed by three shots fired from an Israeli boat.

“The navy boat came and without saying, for example, ‘go south’ or ‘this area if forbidden,’ they didn’t say anything. They just shot immediately,” says Taha.

Taha’s father and his two grandfathers and all of his uncles are fishermen. But on that day he decided to become a journalist focusing on documenting the perils of life on the sea in Gaza.

That is when he’s not surfing. Taha got his first glimpse of a surfboard on a TV series known in Arabic as “Coastal Village,” known in the rest of the world as “Baywatch,” that aired on an Israeli TV channel.

“The hero of the series was named Mitch. I followed that series episode by episode to watch him surf. I dreamed of one day being able to do the same.” Soon after he set about trying.

One day Taha took a broken closet door off its hinges and tried to use it as a surfboard. It sank. He was nine years old. Next he tried the door of the fridge. He took off the steel parts and put it in the water. Better than the first attempt Taha could stand on it but the board didn’t move forward.

“I asked my father more than once for a surfboard but he couldn’t get me one because there weren’t any in the Gaza Strip.”

When Taha was 11 a friend of his sold him an old windsurfing board. His father helped him with the money and he took it to be repaired by a man who fixed the fiberglass of fishing boats.

“From then on I would spend all day in the water without getting out. I had wanted to do this for a very long time.”

One morning when Taha was 17, an American named Alex came down to the beach where Taha was riding the waves. Alex was a skateboarder and a journalist from Los Angeles. He had come to write about war and he was surprised to discover that there was surfing in Gaza. He wrote a story about Taha and told him he needed to get a wetsuit (It was November in the Mediterranean and Taha was swimming without one). He said he wanted to help him.

“I didn’t pay much attention because many people at that time said 'we want to bring you this,' 'we want to do that for you.'” But a month later a man named Matthew Olson came to the Strip. He said he had read Alex’s article and wanted to help.

He collected donations from supporters of the Palestinian cause to buy him a surfboard and a wetsuit. He asked for his weight and height to make a custom board.

“I told him there are others aside from me, 4 or 5 people, that also do this sport and also don’t have any resources.” Olson took their names and the measurements and got them boards and wetsuits too.

Taha rides the waves in Gaza.

After the equipment made it across the Atlantic though, it would take another five years for Taha and his friends to get them. The Israeli authorities kept them impounded at the border crossing until, with help from political figures and the media they were finally allowed in. By that time the fiberglass had started to break in the sun.

The four others who received boards have taught their siblings and cousins and now the number of Gazan surfers is up to about 33. They even have a Facebook group.

Taha painted the Palestinian flag on his board. “My dream is to represent my country in foreign countries and prove to the whole world that we are people who love life and there is no difference between us and America or the UK or Israel in education or potential, but we have a lack of capacity because of the Israeli occupation.”

Taha is studying journalism at Palestine University. During the last war he worked as a photographer, taking pictures and filming the violence.

Few families escaped tragedy in the summer of 2014 and Taha's was no exception. The four boys that were killed on the beach last summer during Operation Protective Edge were relatives from another branch of the family.

Yet despite the difficulties and violence he has witnessed, and unlike many Gazan young people, Tahta doesn’t want to leave.

"Other than that I don’t want to go out don’t want to immigrate and live elsewhere and forget my country and marry someone from outside. I want to continue like anyone else from this country.”