The "Cú Chulainn Coaster," Tayto Park's new roller coaster, opened in June 2015. The mythological warrior-hero stands astride the entrance to the ride.

We Irish all grew up eating Tayto. My grandmother wouldn’t ever have said “a packet of crisps”; it was always a “pack of Tayto,” no matter what brand it actually was. The brand is as well known in Ireland as Guinness.

It didn’t hurt that for many years Tayto was essentially the only brand available. In 1954, Joe “Spud” Murphy founded the brand with its iconic cheese-onion and salt-and-vinegar flavors. Over the next 60 years, Tayto lost some of the dominance it once had in a changing Irish snack-food market. But its mascot, “Mr. Tayto,” still has a visibility in the Irish landscape and a place in the Irish mind that few other brands can equal.

Behind the scenes, the Tayto brand has changed hands a number of times and is now owned and manufactured by Largo Foods, an Irish-founded company owned by German snack-food giant Intersnack.

Despite German ownership, Tayto is so fundamentally Irish that a branded theme park was opened in 2010, near the company’s factory in Ashbourne, County Meath, about 30 minutes from Dublin. This park was the idea of Ray Coyle, who founded Largo Foods and is still managing director and a minority shareholder. But Largo Foods doesn’t own the park. Built on land owned by the Coyle family, managed by Ray’s son Charles and with other family members involved in operations, it is essentially a Coyle family business closely affiliated with the Tayto brand, while remaining a separately-owned operation. 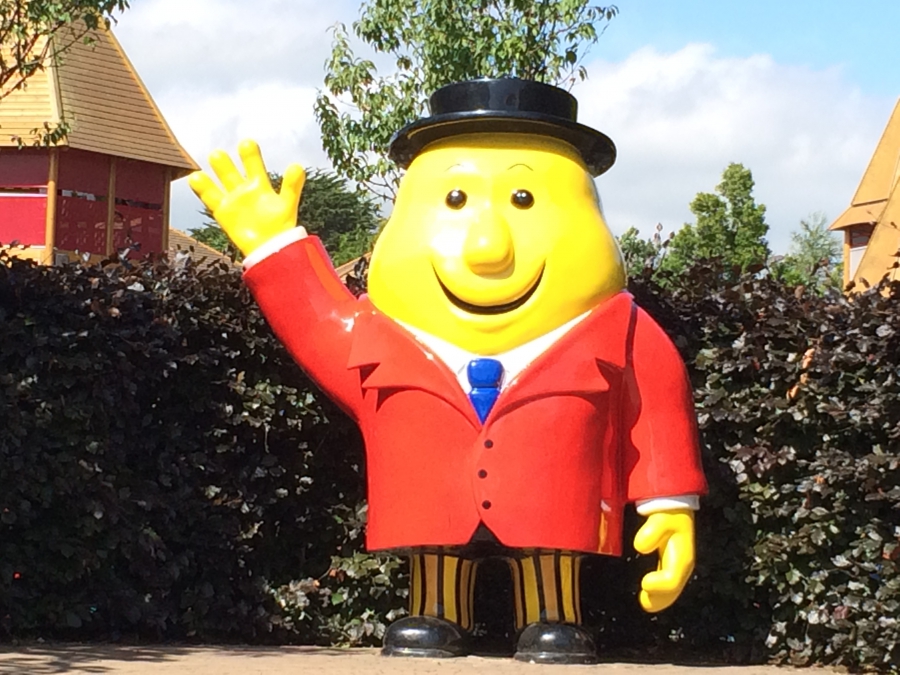 Here greeting visitors to the park, Mr Tayto has been the symbol of Tayto crisps since 1954.

Mr. Tayto is everywhere in the park, wearing his trademark dapper suit and hat. When you enter and leave, you get a packet of Tayto crisps. Which makes it easy for families to carry on a uniquely Irish activity: making crisp sandwiches, the white-bread, butter and crisps concoction that are the quintessential Irish snack.

This year, Tayto Park became the site of the only permanent roller coaster in Ireland, one of the largest wooden coasters in Europe. Beyond that, the park offers zip-lining, climbing walls and rope walks, water-park games for kids, animatronic dinosaurs and a small zoo — a real zoo, not a potato zoo — which has a surprisingly robust collection of meerkats, spider monkeys, porcupines, bison, birds of prey and even a few mountain lions and tigers.

The Tayto plant stands across the road from the theme park, and those interested can go on a self-directed tour. Unfortunately, you can’t see much of the manufacturing process — trade secrets and all — so the thing I enjoyed most about it was hearing the Mr. Tayto election song playing on a loop near the entrance.

Yes, Mr. Tayto ran for election to the Dail, the Irish Parliament, in 2007. The company put up posters and later published a book about the character’s history, from hardscrabble roots as a tuber to his current fame. He didn’t win. Probably for the best. Who knows how public office might have affected his crispiness.