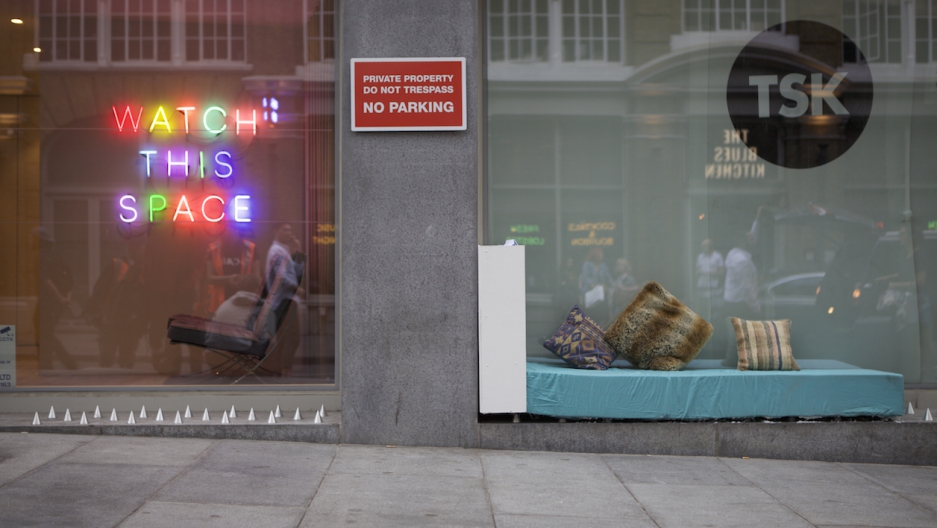 Imagine trying to sleep with a row of steel studs pushing into your back.

Unfortunately, it’s a growing reality of life for many people in major cities. Dubbed “anti-homeless spikes,” they’ve been popping up all over in attempts to make public spaces too uncomfortable to so much as rest on. And as homelessness increases in London — rising 79% since 2010 — so too have the spikes. In an effort to protest these anti-homeless measures, one artist collective in the UK found a way to take these inhospitable spaces and make them a little more welcoming.  Calling themselves Better Than Spikes, the group protests hostile architecture by transforming it into a usable space.

Fed up with “public/private space inequity,” the artists reclaimed a prominent East London spike strip by covering it with a comfortable mattress to sit and sleep on. The coup de grâce: a small public library with books on architecture and urban design.

One member of the group, artist and activist Leah Borromeo, explained their efforts: “The city is filled with space, yet most people don’t stop to think just how much that space has been built to control them. This kind of hostile architecture is all over. Bus stops have slanted platforms you can perch on but not sit on. Barriers are placed on walkways. It sends a visual message and has a real life impact. You aren't free anymore. You're limited by what and where a planner or corporation says you can go.”

Last summer, a tweet photographing anti-homeless spikes outside of a London apartment building caused an immediate uproar. Following the tweet, public pressure, petitions, and community activism forced the building to remove the metal studs. Mayor Boris Johnson sharply denounced the installation as “ugly, self-defeating, and stupid.” On that point, he's not alone.

Borromeo elaborates, “I think it’s essential not to censor your kids from difficult things like inequality and poverty. You don't grow up thinking 'yeah, I wanna’ be homeless.' Oftentimes, life gives you a punch to the guts you just can't recover from. The way capitalism works means that you and I could very easily be panhandling if a few things in our lives go awry. Putting spikes up like this doesn't address the issues of inequality and poverty — it just pushes it away from your vision so you don't have to look at it. And what kind of a dick move is that?”

Their website puts it pointedly: “Nothing says ‘keep out’ to a person more than rows of sharpened buttplugs laid out to stop people from enjoying or using public space.”

It’s hard to argue with that.