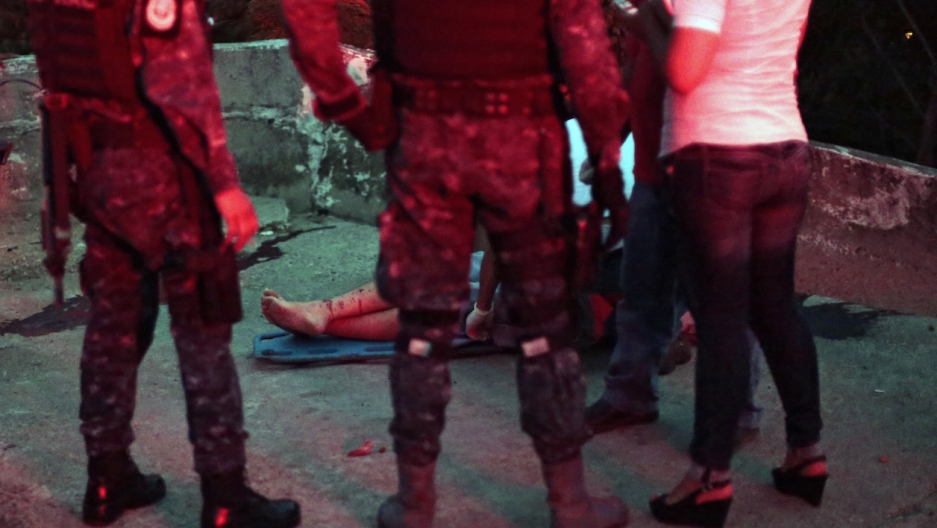 Mexican Federal Police stand next to the corpse of a person murdered by hit men in Acapulco, Mexico, on May 11, 2015. Guerrero is one of Mexico's poorest and most violent states, where a lucrative drug trade has flourished.
Credit: Pedro Pardo
Share

MEXICO CITY — The real life crime stories in Mexico often seem weirder than fiction. A drug kingpin escapes prison in a mile-long tunnel fitted with electric lights. An assassin dresses up as a clown to take out a rival at a party. Traffickers sneak cocaine into the United States in cans of chili pepper.

The scenes are also bloodier than most crime novelists would touch: Cartel gunmen leave a pile of 49 bodies with no heads, hands or legs, massacre 72 migrants and sow a mass grave with 197 corpses.

But San Diego-based crime writer Don Winslow isn’t one of them. He’s dived head first into the all-too-real carnage of the Mexican drug war, recreating the surreal horror in a series of novels.

Winslow first brought his unflinching style to US-based crime novels in the 1990s. He took his fiction further south when violence started exploding in Mexico in 2007. His 2010 book “Savages” was made into a movie by Oliver Stone, starring John Travolta and Salma Hayek.

His latest novel “The Cartel,” the sequel to a previous best-seller, looks at the large-scale battles between Mexican criminal empires. Fellow crime writer James Ellroy calls it “the ‘War and Peace' of dopewar books.”

In an interview with GlobalPost, Winslow described the years of painstaking research that went into the book, including interviews with actual drug agents and traffickers.

GlobalPost: How did you first start writing about the Mexican drug war?

Winslow: It was unintentional. I had not written previously about drug trafficking at all whether it was in Mexico or anywhere else. I live in the San Diego area and one morning in the nineties, I woke up and I had the San Diego Union on my screen and there was this mass killing of 19 people. I couldn’t get it out of my head and I was trying to figure out, “How could something like that happen?” Nowadays that would be a low body count. But back then to me that was extraordinary and disturbing. I started to read books, not about the drug war, but books about evil and philosophy, but they didn’t give me answers. So then I read books about the drug situation and that got me into it.

Is it tough to make sense of the weird mix of crime and war in Mexico?

What is your view on the war on drugs?

I think I have more of a leftist perspective on it. I talk to people on various sides of this issue. I talk to cops, and I talk to policymakers. A lot of cops privately tell me that they are concerned by this militarization. It is taking them out of what they consider to be real police work, and putting them in opposition with minority communities, as opposed to cooperation with them. It is an unfortunate thing. I think when in the war on terror, we switched into a heavy surveillance state, we were able to do it so quickly because we had already practiced it with the war on drugs. I think there is something of a campaign against poor people and powerless people.

Can you describe the kind of research you do?

I talk to cops, DEA (Drug Enforcement Administration) people, ICE (Immigration and Customs Enforcement) people. I have talked to traffickers. I have talked to addicts. I have talked to gang kids and their families. I want to be very upfront with what I am doing. I tell them I write fiction and that I am trying to get it right. That I am not doing journalism, I am not going to put names in papers. I am not so much looking for facts. I am looking for impressions and their take on the world, how they see things. Not what happened but more the impact of what happened.

Is it hard as an American to step into the minds of Mexican characters? Those were very difficult issues. I didn’t want to be presumptuous as an American and an Anglo. At the same time, I felt that I needed to step into their shoes, so I did a number of things. I have spoken with people, and tried to pick up rhythms and certain words. I am close to the border so we have a lot of Mexican people here and I would go and talk with them and check on jargon and slang and language. You need to put yourself in the mind of a drug lord and try and see the world through his eyes as opposed to standing outside like it is a silhouette.

Do you ever question whether crime fiction on cartels is glorifying violence?

Oh my god, do I wrestle with that? At the end of the day, I tilt toward the side of, “By informing people, we are doing good.” But in the day by day writing of some of these things, I would wonder, “Am I tripping across a line? And am I simply doing a pornography of violence? Is this just voyeuristic?” And I think that those are troubling issues. There are times when I chose to do the violence offstage. Other times, I don’t write about the actual violence, but about the reaction of somebody [seeing] it, and try to deal more with that psychology and emotion than the actual physical act. But I think that is a wicked problem, and I wrestle with it all the time.