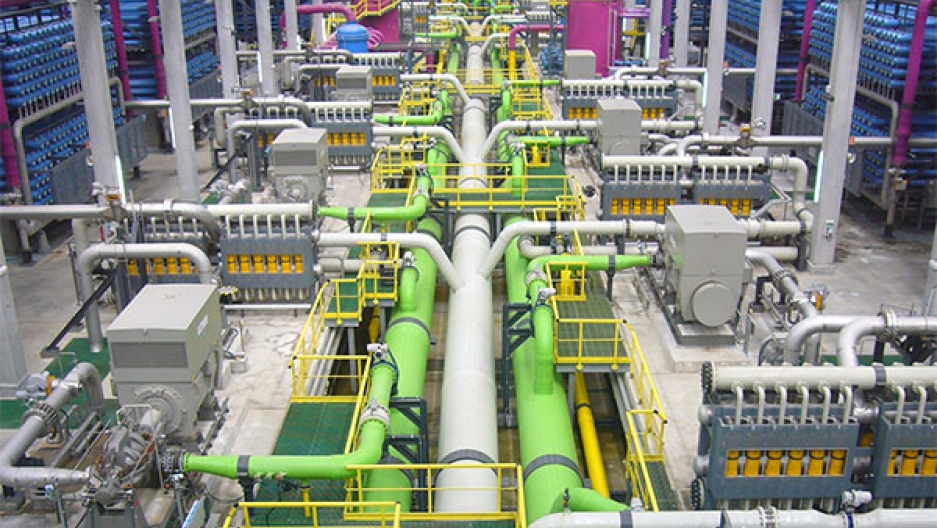 On a Friday this spring, a group of students from Yale University's School of Forestry and Environmental Studies drove two hours to visit Swansea, Mass., a community with rolling green hills on the commonwealth's southern coast, for a surprising reason — to see the town's newest water treatment facility.

They were greeted by Robert Marquis, who's been Swansea's water manager for four decades.

"So you’re standing in the first publicly held desalination facility in the Northeast," Marquis told the students.

Desalination is the process of making freshwater out of saltwater by removing the salt. People have been doing it on a small scale for centuries. On a big scale, though, desalination of seawater takes a lot of energy and a lot of money. But as water becomes more scarce and more contaminated, some communities feel like they don’t have a choice.

"Globally, we’re using more groundwater than is naturally recharged," said Jerry Schnoor, an environmental engineer at the University of Iowa. He says the biggest source of freshwater is below our feet, in underground caves called groundwater aquifers. They’re supposed to be naturally refilled by rain and snow — but we’ve covered too much of the ground with cement.

"We are taking it out faster than it can be replenished," Schnoor said. "And that means less and less water per person, and that’s what we’re facing in future decades."

In California, they’re re-opening old desalination plants and building new ones. But it’s not just a California thing. Low groundwater levels are a problem for communities everywhere. In coastal towns in New England, for example, as they’ve pumped their groundwater aquifers dry, nearby saltwater has started to seep in, making the whole supply salty. That’s what happened in Swansea. The state put a highway nearby, the town’s population began to boom, and groundwater ran low.

Marquis says the result was a water crisis.

"We just couldn’t support a burgeoning population or commercial growth," he said. "Anything that came into Swansea, we were objecting to it if it was going to be water intensive."

Like California, the town had to restrict water use and impose steep fines.

"People were just fed up," Marquis said. "They were yelling and screaming. If we allowed one more person to tie in, they were just going to flip out."

Marquis says when he first suggested desalination, the townspeople just couldn’t imagine it in New England. But then the nearby city of Brockton opened a $120 million desalination plant. Brockton officials thought they had a way to make desalination cheap — by using river water that’s only slightly salty, because it’s near the ocean. Less salt means it takes less energy to desalinate, and less money.

But seven years later the water the Brockton desalination, or desal, plant produces is still too expensive — so Brockton gets its drinking water instead from a lake. The desal plant is pretty much not being used.

"Cities put in desal plants — those on the East Coast — and in hindsight, it appears that maybe that was a bit too hasty," said Dick Luthy, director of the Engineering Research Center for Re-inventing Urban Water Infrastructure at Stanford University.

Luthy thinks there's a way to make desalination even cheaper.

Unfortunately, it starts with the water we flush down the toilet. That water has some salt in it. And "we're going to treat the wastewater anyway," he said.

Related: The reason New England was snowed under — and California went dry

Luthy points out we already clean wastewater before we pump it back into the ground or release it into an ocean or lake. He says it’d just take a few more steps to make wastewater directly into drinking water — Luthy imagines small plants for individual neighborhoods or subdivisions that use little energy. He's trying to prove it's possible by building a demonstration plant about the size of a mobile home in a remote corner of the Stanford campus.

The site is still a dirt hole in the ground with pipes sticking out. Stanford plans to divert some wastewater flowing to a nearby treatment plant, and instead send it into this facility.

"We’re taking it out, we’re going to some experiments and then putting it right back in the ground,” said construction manager Joe Kearney. "So it’s just for testing.”

Because, Luthy says, they have to completely alleviate people’s fears about drinking sewer water, and prove it's safe.

Like Luthy, Robert Marquis in Swansea thought desalination could be affordable with a source of less salty water — and by keeping the plant small.

The $19 million plant’s been operating for a year now. The nondescript, one-story building is mostly one big room full of pipes. The desalination process centers around a few racks of slim, white columns. Those are the reverse-osmosis filters that separate salt from water.

"These racks are assembled in Cortland, N.Y., and come on a truck and you place them here, hook up the phalanges, and yowee," Marquis said. "Pure water."

But there are drawbacks to desalination in the northeast. Those reverse-osmosis, or RO, filters are really delicate and don't like ice. Swansea uses two miles of pipes to heat incoming river water before it reaches the plant.

"Below 36 [degrees], you can't push that water through those RO membranes," Marquis said.

The process results not only in fresh water, but also large amounts of leftover, highly concentrated salt. Marquis said they get rid of the salt by mixing it with water to match the salt concentration in the nearby river before they dump it in. Environmentalists worry too much salt all at once will harm wildlife.

Desalination plants are still few and far between in the northeast. But they may become a more viable option. So far, it's working for Swansea. The water district levies its own property tax to spread out the cost. And Marquis tells visitors with pride that, last year, the Swansea facility was nominated for an award — international desalination plant of the year. It was up against Dubai, Singapore, and Sorek, Israel.

"The water district dispatched me to Paris, France, to the Global Water Awards," Marquis recounted. "And I sat there saying, 'We are going to win.' But we came in third. Third in the world — Swansea, Massachusetts — which is outstanding."

Outstanding, considering many Americans think of desalination as just a California thing.

A version of this story first appeared on WGBHNews.org. To explore the simple yet vast subject of water, WGBH News has partnered on a multi-part series with the American Academy of Arts and Sciences. You can find the entire series here.