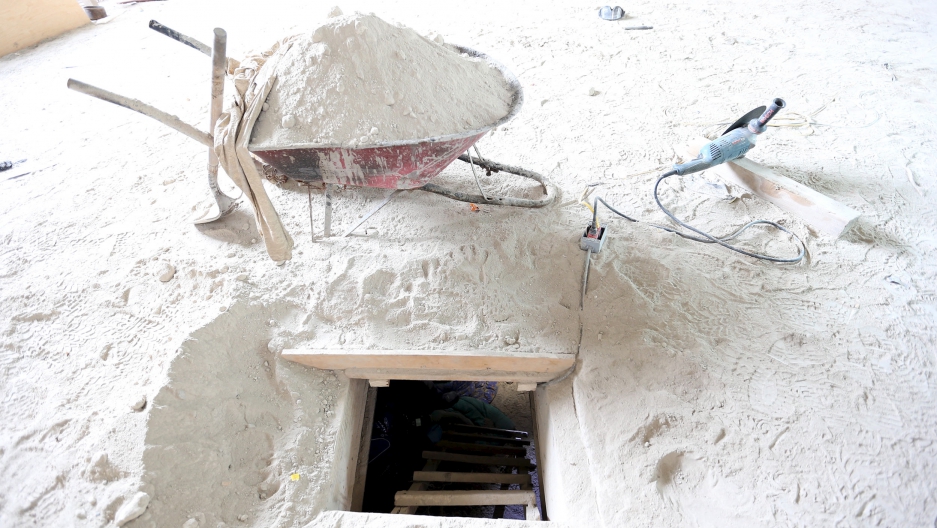 The entrance of a tunnel connected to the Altiplano Federal Penitentiary and used by drug lord Joaquin 'El Chapo' Guzman to escape, is seen in Almoloya de Juarez, on the outskirts of Mexico City, July 12, 2015.

If you're in the drug trade, Mexico is a good place to hide. At least it is, for Joaquín "El Chapo" Guzmán.

He broke out of prison last week and remains on the lam. The Mexican government says it will recapture him, but journalist Guillermo Galdos isn't so sure. He's one of the two men — the other being Angus Macqueen — behind the new Frontline Documentary, "Drug Lord: The Legend of Shorty." It documents their two-year effort to try to get an interview with Guzmán.

The two reporters put their lives at risk to get into the inner circle of the Sinaloa cartel, walking through its poppy fields and marijuana plants. Throughout the film, you get the feeling they might be executed.

For Galdos, the pursuit of Guzmán was a way to learn about the cartel and call out the failure of government agencies. “I have been covering the War on Drugs for the last 15 years,” he says. “And we didn’t believe that Guzmán was the most wanted man in the world at that time. Certainly in Mexico, they were not looking for him.”

Galdos says that as he got closer to the cartel, he couldn’t believe the way they acted. Galdos and Macqueen would be escorted into secure areas teeming with heavily armed cartel troops. Those troops would just hang around, at times playing with their ATVs and weapons, and constantly using cell phones. Galdos couldn’t believe they could act this way without people seeing them.

Guzmán’s men actually say the government troops knew where they were, but kept quiet. All they had to do is pay them off. And the film shows that if you do snitch, you die.

It’s easy to say that Galdos is brave for reporting what he did. Especially, when you count the number of journalists killed by the cartel. The pair even get locked inside a garage with one of Guzmán's meth traffickers.

That sustained effort allows the world to see how the cartel works from the inside. True, he only went places the cartel wanted him to see. But we get the idea that there are a lot more players involved than pot farmers in the mountains. It’s a huge business, a corporation.

And it all leads to Guzmán.

Read a related story on the pair's interview with Guzmán's mother, who said her son always was ambitious.